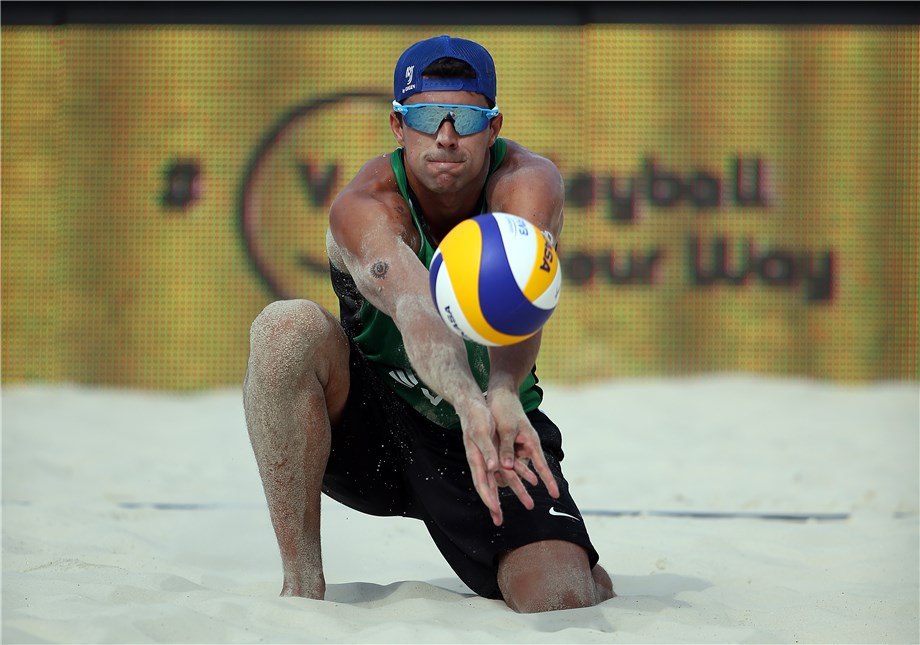 Doha, Qatar, March 13, 2019 – Pedro Solberg and Vitor Felipe made a winning start as they took their first steps as a team on the FIVB Beach Volleyball World Tour by securing two wins from two at the Doha 4-Star Katara Cup on Wednesday.
The Katara Beach Cup is the fifth time that Qatar has hosted a World Tour tournament and it will run from March 12-16 at the Katara Cultural Village. 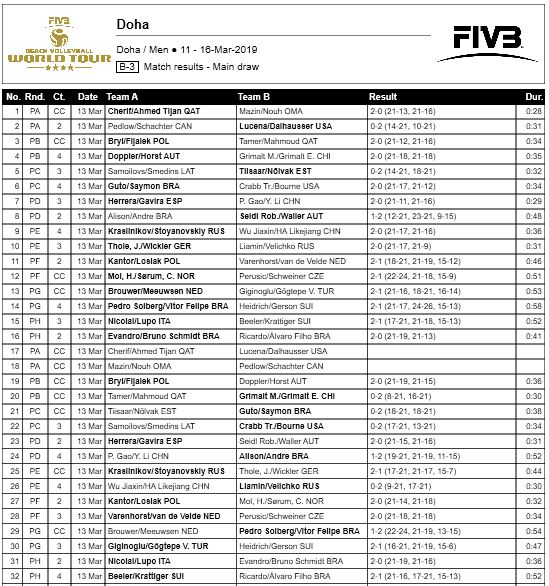 It means they top their pool and go straight to the second knockout round with the other pool winners. Second and third place teams will play in the first knockout round on Thursday.
The Brazilians began by beating Swiss duo Adrian Heidrich and Mirco Gerson 2-1 (21-17, 24-26, 15-13) and then followed up with a 2-1 (24-22, 19-21, 15-13) victory over the 2018 Doha gold medallists Alexander Brouwer and Robert Meeuwsen of the Netherlands.

Quick links - Beach volleyball:
FIVB Beach Volleyball World Tour - Doha
FIVB.com - Beach volleyball
Facebook
Twitter
Instagram
“Brouwer and Meeuwsen are a great team and it is always hard to play against them,” Pedro said. “They are really offensive and they hit really hard.
“They are such a great team, so it is amazing for me and Vitor to start with two wins in our first day, especially with a huge victory against a great team.”
Pedro and Vitor Felipe have only been together a matter of weeks after their former partners Bruno Schmidt and Evandro Goncalves teamed up for the Tokyo 2020 Olympic Games qualification period.
Pedro competed with Evandro at the Rio de Janeiro 2016 Olympic Games, but the aim is now for him and Vitor Felipe to feature at Tokyo 2020 together.
“He is honest and works really hard for his dream,” Pedro said. “We have the same goal and this is the main thing for a team. I love to play with younger players, especially with one who listens to you and also brings new things. I’m learning a lot with him and also trying to teach him everything I know.”
Oleg Stoyanovskiy and Viacheslav Krasilnikov also topped their pool and did so against a team they met last time they were in World Tour action.
After the Russian pair defeated China’s Wu Jiaxin and Ha Likejiang 2-0 (21-17, 21-16), they then beat Germany’s Clemens Wickler and Julius Thole 2-1 (17-21, 21-17, 15-7), the team they defeated in The Hague 4-Star final in January.
“It was very hard, we know German teams and they are very good. We had a tough match against them in the last tournament in the final and we also were with them on our training camp. That is why it is a set for them, then a set for us. We are very even.”