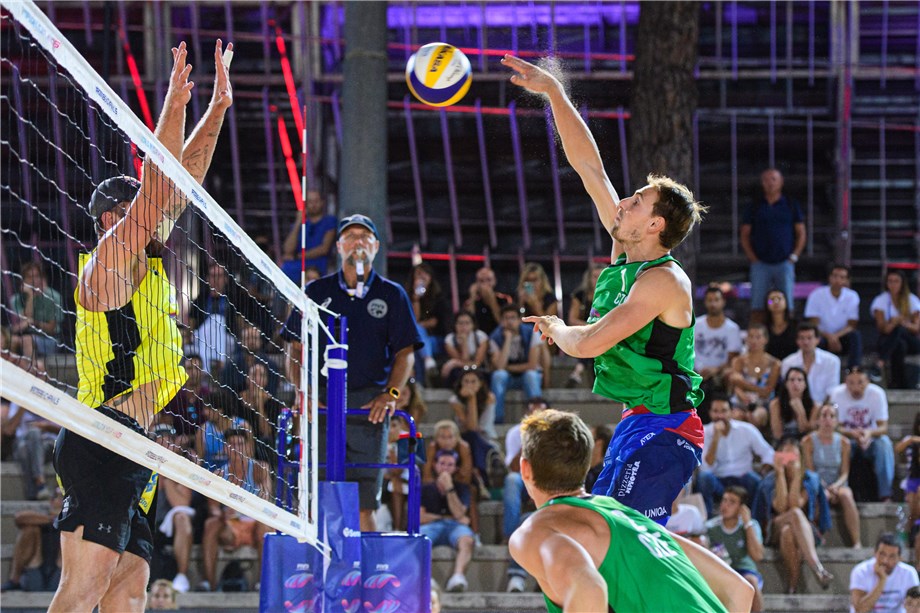 Rome, Italy, September 5, 2019 – If Ondrej Perusic and David Schweiner could chose a spot on the planet to cap off the best season of their partnership, Rome would certainly be in the conversation. After all, the Czechs spend a fair amount of their time in the Eternal City, where they practice with their coach, former Italian player Andrea Tomatis.

Quick links - Beach volleyball:
FIVB Beach Volleyball World Tour Finals - Rome
Tokyo Beach Volleyball Qualification - Haiyang
Facebook
Twitter
Instagram
Perusic and Schweiner, who are together since 2017, had their wish granted as they are competing at the World Tour Finals in Rome, where they hope to get another good finish in 2018-2019, a season in which they won the silver medals on their home sand of Ostrava and finished fifth at both the Gstaad Major and the European Championships.
“This was by far our best season,” Schweiner reflected. “I think we had some ups and downs and that’s something we still want to improve on, but the good moments were fantastic, like the silver medal in Ostrava or the fifth-place in Gstaad. And to get to finish the season here in Rome, where we spend almost half of the year training with our coach, it just feels like a second home tournament.”
And the Czechs started the Finals in great form as they posted a 2-0 (21-19, 21-13) victory over Russia’s Nikita Liamin and Taras Myskiv and upset Brazilians Alison Cerutti and Alvaro Filho 2-0 (21-11, 21-14) to top Pool D and advance directly to the Round of 16.
Their good season has put the Czechs in a position to dream about qualifying for the 2020 Tokyo Olympics. Currently sitting in the 11th spot of the Olympic rankings, the 25-year-old Schweiner and the 24-year-old Perusic can still book their places for the Japanese capital via either the Olympic Qualification tournament or the European Continental Cup.
“To be honest, we didn’t think we could be in this position right now,” the blocker added. “It was a dream at first and with time it became a goal. It’s in reach, for sure, but there’s still a long road to go. There are just so many great teams competing for just a few spots, so I think we’ll most likely be fighting until the deadline in June 2020 and we have got to be ready for it.”
The Czechs are one of the 32 teams who will extend their seasons for another two weeks to compete at the Olympic qualification tournament in Haiyang, China, from September 18-22. Even though they’ll be contending with Olympic medallists and world champions for just one berth, they believe they can do it.
“In one tournament anything can happen and that’s good for the underdogs like us,” Perusic explained. “We knew September would be important with the World Tour Finals and the Olympic Qualifier and we took some time off after Moscow to make sure we’d prepare well. I feel that in this Olympic qualification cycle the system has been really fair, there’s more opportunities for teams to qualify and we hope we can take advantage of one of them.”