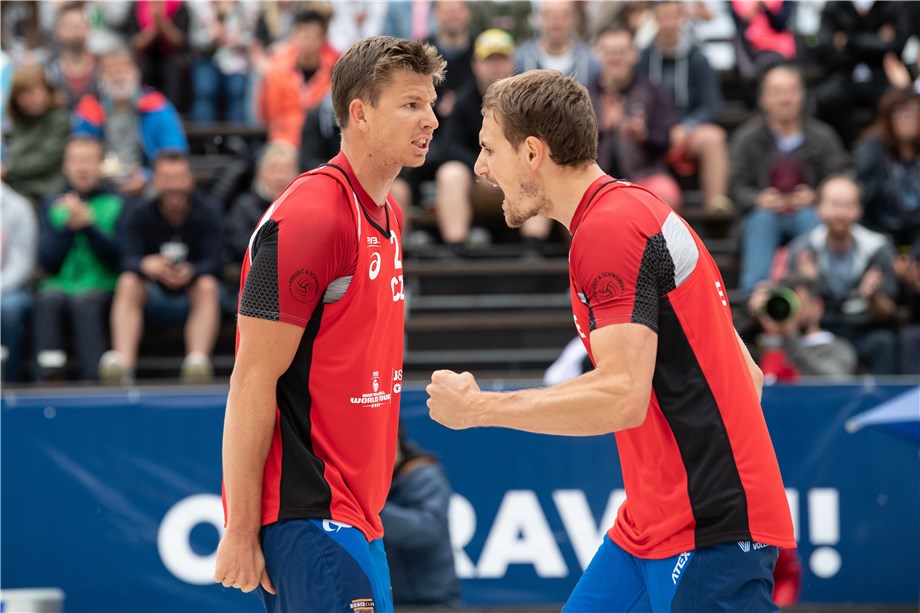 Ostrava, Czech Republic, May 30, 2019 – Ondrej Perusic & David Schweiner are the Czech team from either gender that made the most of the home-court advantage in Thursday’s pool play matches of the four-star J&T Banka Ostrava Beach Open 2019 main draw on the FIVB Beach Volleyball World Tour. They defeated both their strong opponents to advance directly to the men’s Round of 16 on Saturday, alongside two pairs from Brazil and one each from Germany, Norway, Poland, Russia and Spain. 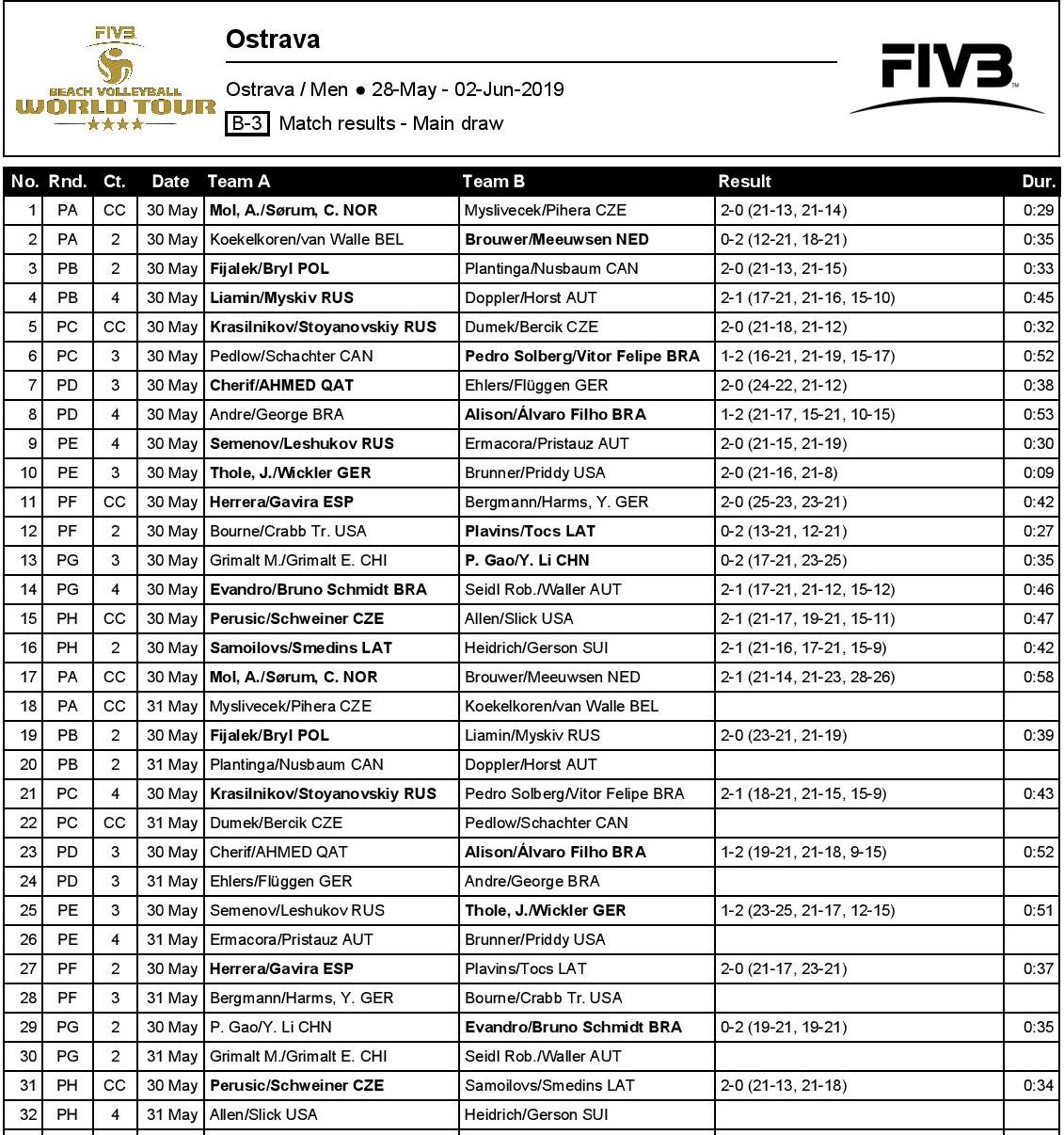 The eighth-seeded Czechs started their Pool H quest with a hard-earned 2-1 (21-17, 19-21, 15-11) victory over USA’s William Allen & Stafford Slick. In the winners match, Perusic & Schweiner had to face ninth-seeded Aleksandrs Samoilovs & Janis Smedins of Latvia. Inspired by the unceasing support from the stands around centre court, the home team hammered out a 2-0 (21-13, 21-18) win to triumph on top of the pool standings.
“The first match was really tough. It was on the centre court, so it was about handling the pressure. We saw the American guys at previous tournaments, where they played really well, so we are really happy that we made it,” an elated Ondrej Perusic commented at the end. “The second match was also very tough against a very strong opponent. You cannot relax for a single ball, because they are really good at coming back into the match and showed it in the second set.”
“The fans here are like the third player on the court,” David Schweiner added. “They are cheering for us a lot. It’s only the first day of the main draw and it’s already really crowded. We are very happy to play in front of such a home crowd.” 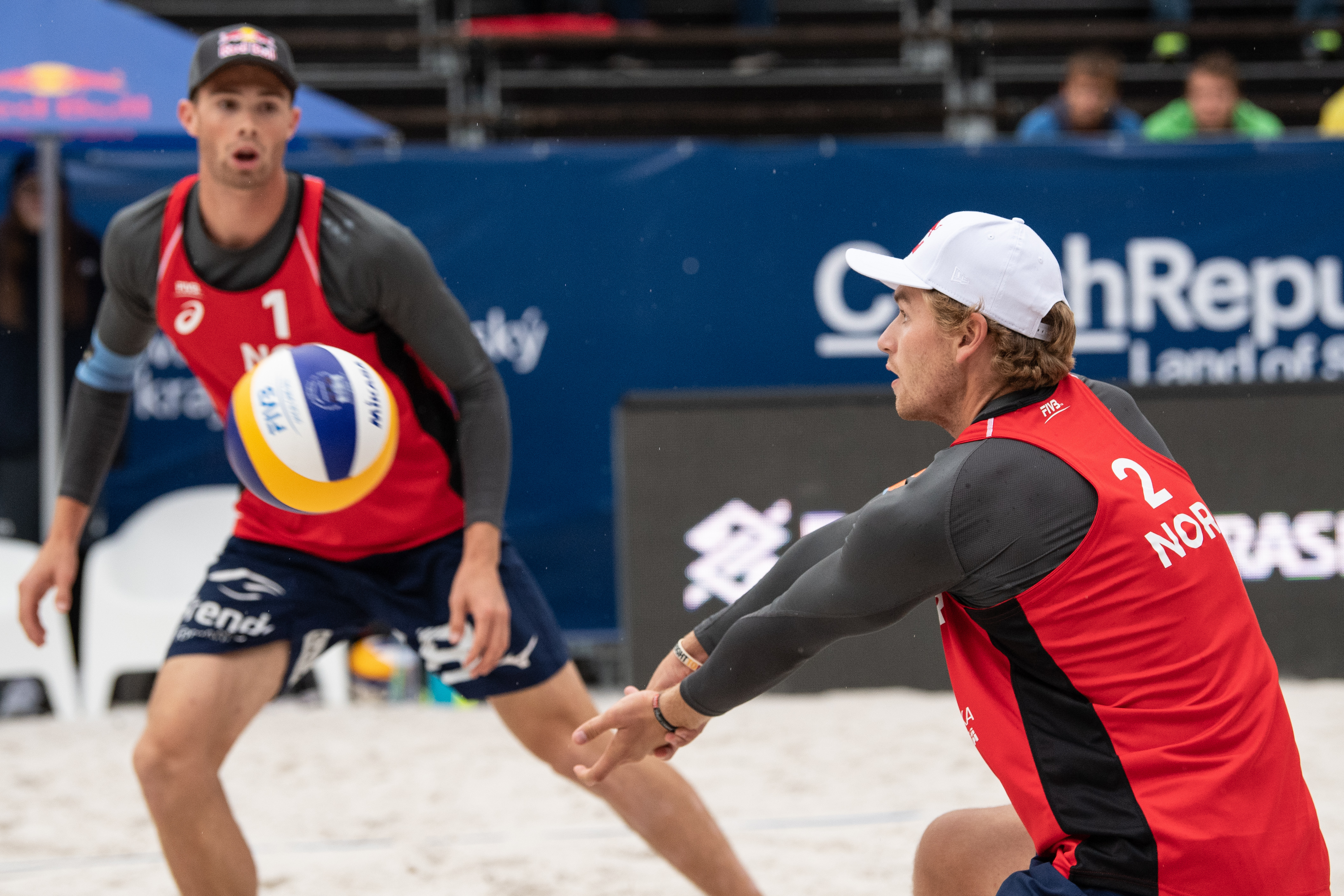 FIVB World Ranking leaders Mol & Sorum in action at the Ostrava centre court
In Pool A, top seeds Anders Berntsen Mol & Christian Sandlie Sorum of Norway and 17th-seeded Alexander Brouwer & Robert Meeuwsen of the Netherlands played a phenomenal tie-break, which went deep into overtime. In what was the longest match of the day, the Mol & Sorum emerged with a 2-1 (21-14, 21-23, 28-26) victory after 58 minutes of play to win the pool.
Brazil’s Alison Cerutti & Alvaro Morais Filho, playing under number 20, were the lowest seeded duo to win their pool, but did so after a couple of tough three-set victories. In an all-Brazilian clash with 13th-seeded Andre Loyola Stein & George Souto Maior Wanderley, Alison & Alvaro Filho delivered a 2-1 (17-21, 21-15, 15-10) comeback to get Pool D underway. Then they followed up with a 2-1 (21-19, 18-21, 15-9) win over fourth-seeded Cherif Younousse & Ahmed Tijan of Qatar. 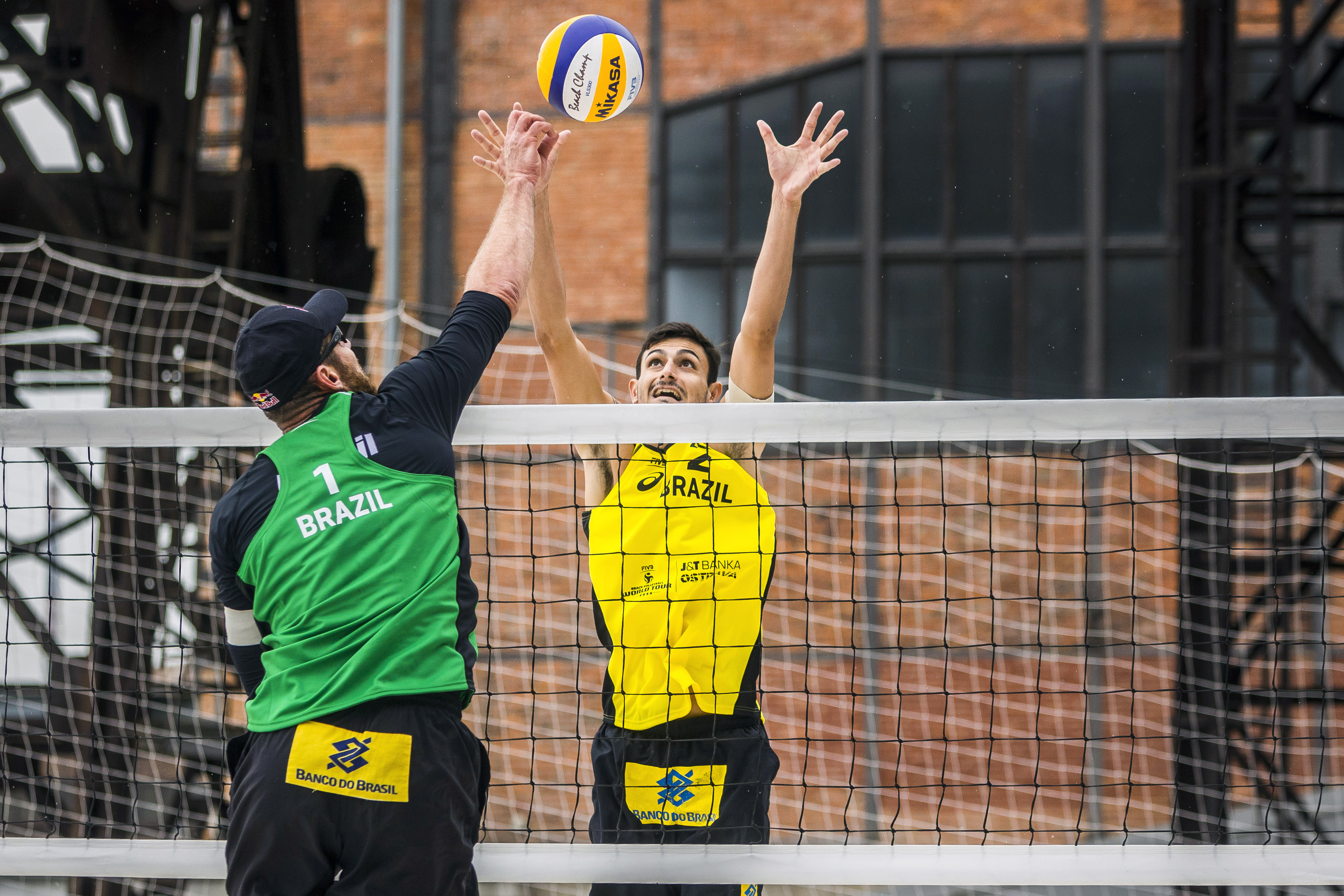