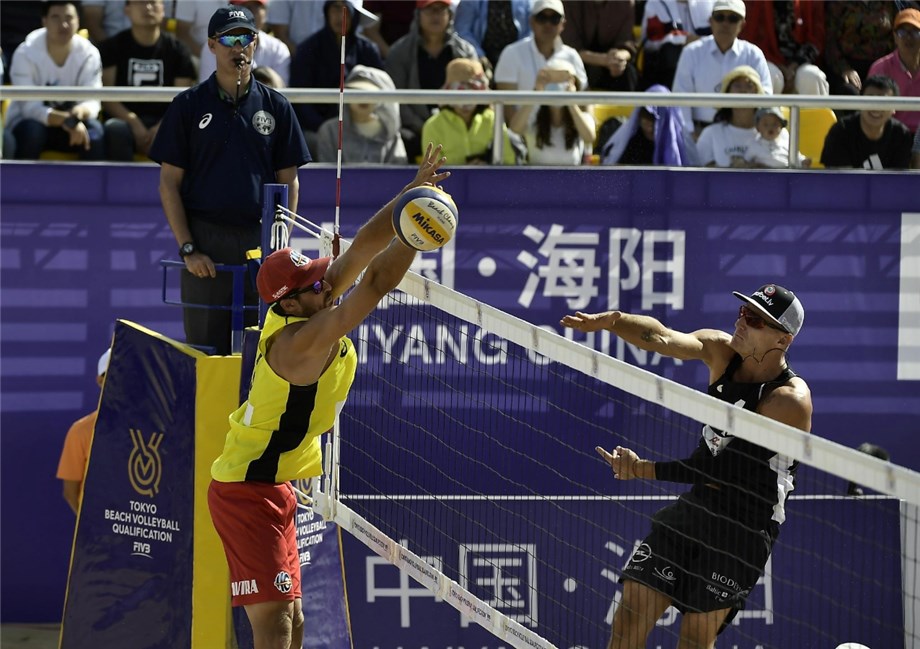 With three of their four matches in the Tokyo qualifier against pairs that competed in the Rio Summer Games, Plavins and Tocs opened play Thursday with a 2-0 (21-19, 21-17) Pool F victory in 38 minutes over Adrian Gavira/Pablo Herrera of Spain followed by a 2-1 (21-13, 17-21, 22-20) triumph in 51 minutes over Piotr Kantor/Bartosz Losiak of Poland.
The Spaniards have competed together in the past two Olympics with a pair of ninths, while the Polish pair was 17th in Rio. While the 30-year-old Tocs is seeking his first Olympic appearance, the 34-year-old Plavins placed ninth at the Beijing 2008 Games with Aleksandrs Samoilovs and captured the London 2012 bronze medal with Janis Smedins.
The Latvians have now split eight FIVB matches with Gavira/Herrera and lead Kantor/Losiak 4-3. Plavins and Tocs played both teams two weeks ago at the FIVB World Tour Finals in Rome with Gavira/Herrera winning a Round of 16 match while the Latvians defeated Kantor/Losiak in pool play.
Plavins and Tocs opened play in the FIVB Tokyo Beach Volleyball Olympic Qualification Tournament by losing to Rio 2016 Olympic bronze medal winners Alexander Brouwer/Robert Meeuwsen of the Netherlands on Wednesday. The Latvians started their three-game victory string by eliminating Canadians Sam Pedlow/Sam Schachter to advance to Thursday's schedule.
Quick links - Beach volleyball:
Tokyo Beach Volleyball Qualification - Haiyang
Facebook
Twitter
Instagram
Also winning their group in mid-day action Thursday were Brazilian Andre Loyola and George Wanderley. Like the Latvians, Andre and George rebounded from an opening setback on Wednesday to Rio 2016 silver medal winners Daniele Lupo/Paola Nicolai of Italy to post three-straight wins.
Andre and George eliminated a host Chinese team on Wednesday afternoon before posting Pool G victories against Ilya Leshukov/Konstantin Semenov of Russia 2-1 (21-14, 15-21, 16-14) in 43 minutes and Robin Seidl/Philipp Waller of Austria 2-1 (16-21, 21-19, 15-12) in 49 minutes.
With their group titles, the Latvians and Brazilians advance to Friday's Pool J where they will play each other in a round-robin match either Friday or Saturday. The two teams have met twice on the FIVB World Tour with Andre and George winning both times, including a three-set victory August 2 at the Vienna Major in Austria.
The other pool winners on Thursday were Mirco Gerson/Adrian Heidrich of Switzerland (Pool A) and Lupo/Nicolai (Pool D). The two teams will secure Pool I slots for Friday and Saturday's rounds. The two teams met on Wednesday in opening group action with Gerson and Heidrich winning 2-0 (21-18, 21-16) in 32 minutes. In the only other FIVB meeting between the two teams, the Italians defeated the Swiss at the 2018 Moscow Open in Russia.
Other qualifiers for Friday's groups are Ilya Leshukov/Konstantin Semenov of Russia and Kantor/Losiak in Pool I and Mathias Berntsen/Hendrik Mol of Norway and Brouwer/Meeuwsen in Pool J.
The final group phase of the FIVB Tokyo Beach Volleyball Olympic Qualification Tournament concludes Saturday morning with the top two teams from Pool I and J advancing to playoff in the afternoon to determine two berths for the 2020 Summer Games.