Player of the Week: Britt Herbots 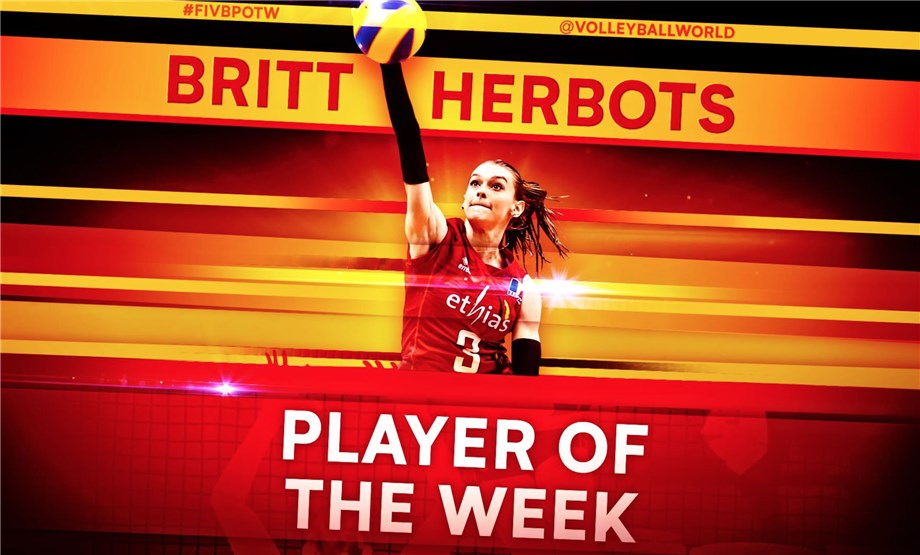 Lausanne, Switzerland, July 20, 2020 - Despite her young age, Belgium's Britt Herbots has been in the spotlight for a number of years now at home and in Europe - but she's now destined and ready for grander things in the seasons to come.

After a brief holiday, Herbots is back on the court, preparing for what could be a monumental season for her following her transfer from Busto Arsizio to Igor Gorgonzola Novara in the Italian League.

"When I received the proposal to play Novara next season, I accepted immediately and with great enthusiasm," said Herbots following her transfer last month, in an interview with Italian sports daily Corriere dello Sport. "Igor are a great club with a prestigious history and I am delighted to have this opportunity."

At just 20 years old, Herbots has been through the gamut of national teams in Belgium - all in one go, starting from 2015 with the U18, U19 and U20 sides, parallel with her being called to the senior national team.

Her first international medal at national team level came as early as 2015, when she led Belgium to bronze at the U18 European Championship and was named as opposite on the Dream Team of the competition.

But Herbots has also left her mark at club level.

Growing up in a volleyball family where her mother played and father coached, Herbots joined her country's top club of Asterix in 2015 and within two seasons had already won two Belgian Championship titles and two Cups, as well as a Supercup.

Moving across the border to neighbouring France in 2017, she immediately led her new club of ASPTT Mulhouse to the French Supercup.

After just one season in France, she moved further south to play in one of the top leagues of the world, on the roster of Busto Arsizio in Italy's A1 for a triumph in Europe's second-tier CEV Cup where she was named MVP of the competition.

And now that she's proved herself, for Herbots it's Champions League time.

Look out for more video of Britt Herbots this week across the Volleyball World channels as we bring you highlights from her career to date.