Player of the Week: Nataliya Goncharova

Lausanne, Switzerland, August 3, 2020 – Nataliya Goncharova is undoubtedly one of the most recognisable faces in Russian volleyball. Well known for her scoring prowess, leadership skills and charismatic vision, the 31-year-old Russian national team and Dinamo Moscow opposite is Volleyball World's Player of the Week.

Lausanne, Switzerland, August 3, 2020 – Nataliya Goncharova is undoubtedly one of the most recognisable faces in Russian volleyball. Well known for her scoring prowess, leadership skills and charismatic vision, the 31-year-old Russian national team and Dinamo Moscow opposite is Volleyball World's Player of the Week. 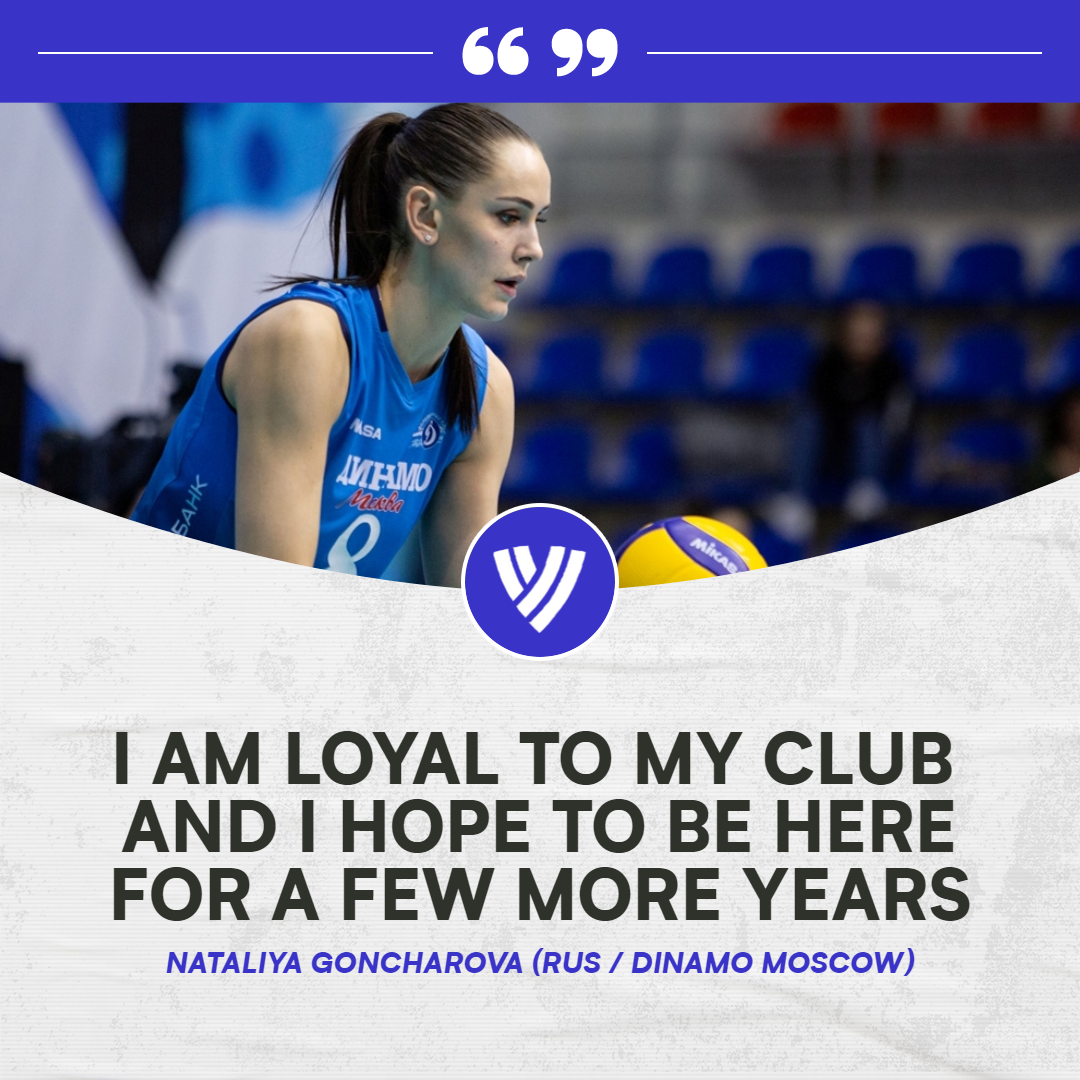 Nataliya was born in 1989 into a family of athletes. Her great grandmother and her grandmother were volleyballers. Her granddad and her dad were involved in track and field, while her mom was in professional basketball. Nataliya and her older sister Valeriya Goncharova started playing volleyball in their native Ukraine.
They both reached the age-category national teams of Ukraine and their first big international achievement was the continental title at the 2005 CEV Youth (U17) European Championship. A year later they earned bronze at the CEV Junior (U19) European Championship (Nataliya was named MVP) and in 2007 they finished in the top six of the FIVB Junior (U20) World Championship.
In 2006, the Goncharova sisters were invited to join Dinamo Moscow and Nataliya has been with the Russian powerhouse ever since.
“I’ve already lost count of the seasons I’ve been with Dinamo. I am loyal to my club and I hope to be here for a few more years,” Goncharova said in a recent online interview for the club’s YouTube channel. “There are proposals from other clubs and every year I always consider the options. But sometimes it's better to stay at a place where you feel comfortable in terms of the game plan and in terms of attitude, which is very important. Maybe the financial conditions are better elsewhere, but for me the human attitude is always a priority.”
In 2010, Goncharova’s athletic citizenship was changed to Russian, just in time for her to join the Sbornaya for the 2010 FIVB World Championship in Japan and earn the biggest title of her career to date, the world title.
“It was just scary for us to leave for another country, but the future looked much brighter in Russia,” Nataliya recalled. “It was stressful for the whole family that we would be far away, but my sister and I were very well received at Dinamo. Head coach Leonid Zayko was like a second dad for us, so we stayed, we took citizenship and a year before I was allowed to play for the Russian national team, I started training with them and I felt very comfortable.”
A decade later, Goncharova has already piled up 186 official caps and scored a total of 2,877 points for the national team. In addition to the 2010 world title, Nataliya contributed to Russia’s continental titles in 2013 and 2015, to the bronze medal at the 2019 FIVB Volleyball World Cup, where she was the best scorer of the tournament, to the 2015 silver and the 2014 bronze in the FIVB Volleyball World Grand Prix.
With her club team, the 1.96m-tall opposite earned 2009 CEV Champions League silver, five national titles, four national cups and two Russia Super Cup trophies. In 2019-2020, however, Dinamo finished below the medal line, in fourth place, in the Superliga, lost the final of the Russia Cup and failed to reach the semifinals of the Champions League.
“Each victory brings great pleasure and satisfaction,” she commented. “It was very pleasant when we won the European championships; I always rejoice at every victory with Dinamo... I was very upset with the way last season went. It didn't work out for us at all and bitterness remained in my soul. In the new season, I would like us to show that we are Dinamo Moscow and that our last results were accidental.”
Nataliya Goncharova took part in two editions of the Olympic Games – London 2012 and Rio 2016. She is now looking forward to her third Olympic adventure and hoping to earn the one major medal she is missing from her collection, after helping Russia win the home-based intercontinental Olympic qualifier in Kaliningrad last August, where she was the best attacker of the tournament.
“I sensed how different the Olympic Games feel,” the Russian star said. “For some reason, I feel great excitement at the Olympics. In London, I was very worried right before the first game and the excitement hindered me. Then it became easier. You probably feel more responsibility, because the Olympic Games are watched by a large number of spectators, and not just volleyball fans. You do not want to embarrass yourself; you want to show a good result.”
After her third Olympic appearance at Tokyo 2020 next year is over, Goncharova will be just 32 years of age and has no intention of stopping.
“I don't have any such thoughts - to take a break after the Olympics, or anytime. I will play as long as my health allows and as long as I feel the desire. If the desire disappears, I see no reason to continue playing, but if there is good health and desire, I will play for as long as possible.”
Outside volleyball, fishing is one of Goncharova’s hobbies.
“I have been interested in fishing since childhood. I very often went fishing with my dad and I fell in love with it. It calms me down a lot. Early morning, silence and a fishing rod - I really like that...”
After volleyball, Goncharova dreams of developing and running her own business.
“For example, a beauty salon,” she said. “It sounds very interesting to me. I would like to develop the business, monitor it, control it and raise it like a child.”
Look out for video highlights of Nataliya Goncharova's career across the Volleyball World channels this week and follow the Russian star on Instagram.
Player of the Week features:
Week 1: Yuji Nishida
Week 2: Annie Drews
Week 3: Klemen Cebulj
Week 4: Brayelin Martinez
Week 5: Milad Ebadipour
Week 6: Gabi Guimaraes
Week 7: Karol Klos
Week 8: Onuma Sittirak
Week 9: Simone Giannelli
Week 10: Eda Erdem
Week 11: Tsvetan Sokolov
Week 12: Sarina Koga
Week 13: Louisa Lippmann
Week 14: Facundo Conte
Week 15: Ding Xia
Week 16: Matt Anderson
Week 17: Britt Herbots
Week 18: Wilfredo Leon