Player of the Week: Paola Egonu 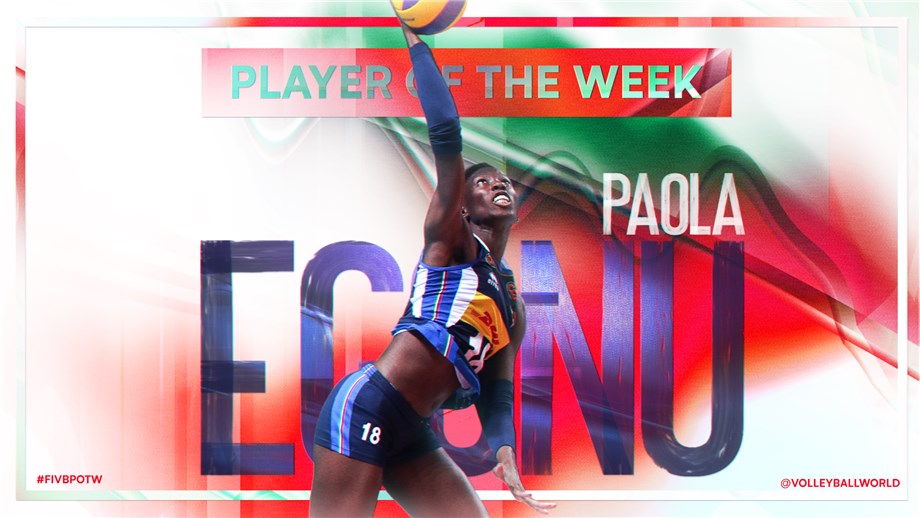 Lausanne, Switzerland, August 31, 2020 - She's one of the youngest volleyball superstars in the world, but at 21 Paola Egonu already has a cabinet overflowing with medals and trophies and is the most formidable player on the Italian national team and for her club, as of last year, of Imoco Volley Conegliano.

Born in Italy of Nigerian heritage, Egonu took her first steps in the sport in her hometown of Cittadella, north of Padua, and was quickly picked for Club Italia - the club that brings together Italy's youngest hopefuls to give them court time in the professional leagues - as early as 2013, when she was just 15.

Although eventually Italy lost the final to Serbia, one of Egonu's greatest moments was surely the 2018 FIVB Volleyball Women's World Championship, where she obliterated all historical scoring records and has now set the bar so high it's hard to see how anyone else can clear it.

Egonu scored a record-shattering 45 points in Italy's five-set semifinal win over China, bettering the previous high of 40 by Kazakhstan's Yelena Pavlova that had stood for 12 years. (Alas, Egonu's match-high of 33 in the final was not enough for Italy to overcome Serbia in that five-setter).

In addition, Egonu emerged the all-time top scorer at a World Championship, amassing 324 points in 13 matches (or an average of just shy of 25 points per match). The previous record had been held by Turkey's Neslihan Demir with 251 points from 11 matches (22.8 points per match) from 2010.

Egonu moved in 2017 to join Igor Gorgonzola Novara and in her two seasons with the club was crowned European champion, winning the Champions League and picking up yet another MVP award. In the same period Egonu helped Novara win the Italian Supercup and two national Cup titles.

When she made her latest move, last year, to Imoco Volley Conegliano, Egonu again struck gold in the Italian Supercup and Cup - but most importantly led her side, as MVP of the tournament, to the title at the 2019 FIVB Volleyball Women's Club World Championship.

For now, Egonu is looking ahead to the new club season about to begin in Italy and Europe, but also the rescheduled Tokyo 2020 Olympic Games after her instrumental, top-scoring role she played in her country's qualifying to the grandest event of all.