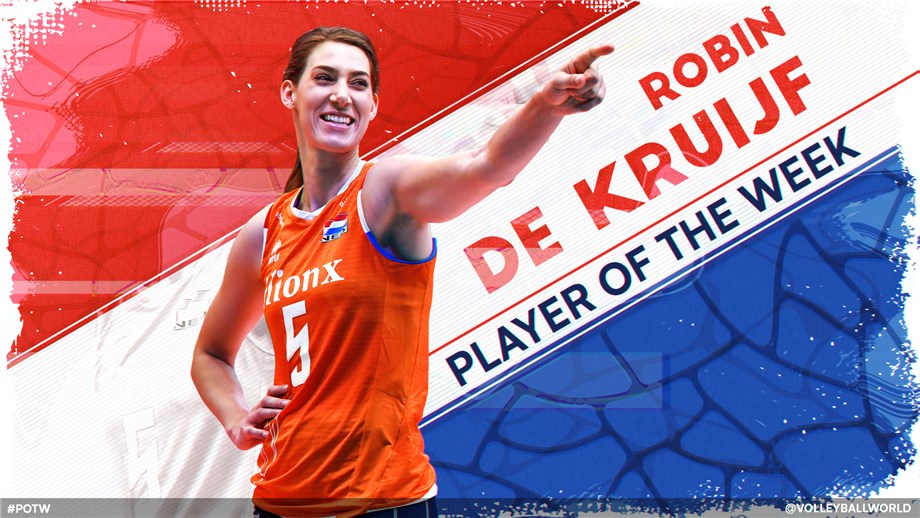 Lausanne, Switzerland, October 26, 2020 - With passion for volleyball and efficiency on the court as strong as ever, Robin de Kruijf's vast experience is a huge asset to any side she plays for - the Dutch middle blocker continuing to create unsolvable problems for opponent attackers, but also keeping everyone on the other side of the net on their toes when she attacks herself.

Born in 1991, De Kruijf started her career at home in the Netherlands, moving clubs a lot before her first venture abroad in 2011 to join Germany's Dresdner SC for two seasons.

It was then off to Italy for a year with Piacenza and another two in Turkey with VakifBank Istanbul, before she returned to Italy and settled in 2016 with Imoco where she has thrilled the Conegliano fans ever since.

In the process, De Kruijf has amassed an astonishing collection of domestic championship titles: two Dutch (with Martinus Amstelveen), three Italian (one with Piacenza and two with Imoco) and one Turkish (with VakifBank) - in addition to numerous Cup and Supercup titles across the three countries.

As if that wasn't enough, she was crowned world champion last year, after playing an instrumental role in Imoco's winning the 2019 FIVB Volleyball Women's Club World Championship, where she was named on the Dream Team of the competition.

De Kruijf has also been highly successful with the Dutch national team - a member of the side that stunned the world with their fourth-place finish at the Rio 2016 Olympic Games.

She has picked up silver medals at the 2009, 2015 and 2017 European Championships, as well as a bronze at the 2016 FIVB Volleyball World Grand Prix. And although the Netherlands didn't manage to advance to the Tokyo Olympic Games, De Kruijf was named to the Dream Team of the European qualifiers early this year.

And as the new season starts to gradually pick up, De Kruijf again has in her sights new distinctions with Imoco, both in the domestic competitions in Italy and the European Champions League.