Player of the week: Tijana Boskovic 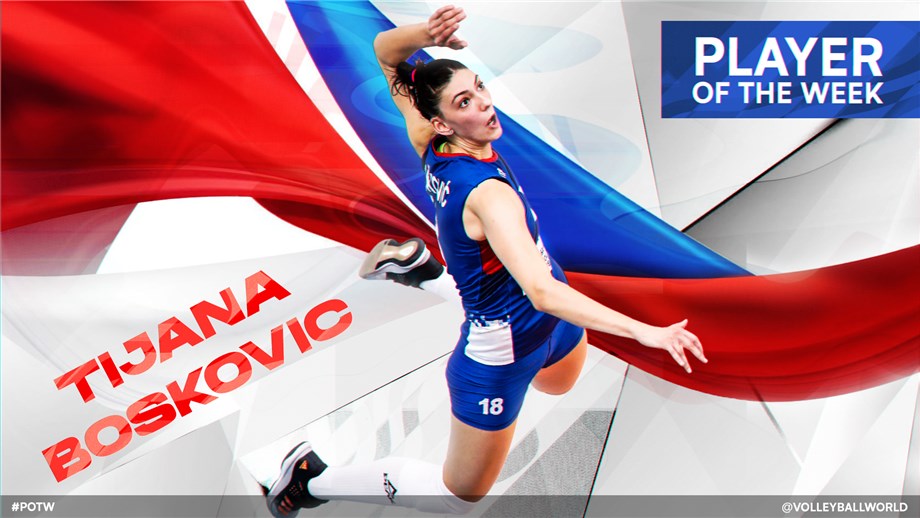 Lausanne, Switzerland, October 12, 2020 - Tijana Boskovic was just 17 years old when she made her debut with the Serbian national team at the 2014 FIVB Volleyball Women’s World Championship, where she led the European squad in scoring. Now 23, the left-handed opposite is considered one of the best players in women’s volleyball.

A highly decorated youth and junior player, Boskovic immediately helped deliver positive results for Serbia who placed second at the 2015 FIVB Volleyball World Cup and third at the European Championships in the same year.

In 2016, she was one of her country's key players on offence in their silver medal finish at the Olympic Games in Rio de Janeiro. The following year, she once again helped her team to FIVB Volleyball World Grand Prix bronze and facilitated their return to the 2017 European Championship podium with a gold medal victory.

Boskovic was only 21 when she led Serbia with an MVP-level performance as they struck gold at the 2018 FIVB Volleyball Women’s World Championship in Japan, which the team followed up on with a gold medal triumph at the 2019 European Championship.

Boskovic started her athletic career by practising karate at a young age, but always preferred volleyball. She moved to Belgrade with her older sister when she was only 14 to play for the national team.

She spent four years in Belgrade before moving to Turkey to play for Eczacibasi VitrA Istanbul. She is currently in her fifth season with the Turkish club and has collected many medals and individual awards, including the 2016 FIVB Volleyball Women’s Club World Championship title and the MVP award, along with Best Opposite awards from various competitions.

Boskovic was Serbia’s top scorer and the tournament's second best scorer behind Malwina Smarzek of Poland at the Tokyo Volleyball Qualification tournament in Wroclaw. Her success rate from the attack line and her powerful jump serves helped her squad secure their second straight qualification for the Olympic Games back in July 2019.