Player of the Week: Yuji Nishida

Lausanne, Switzerland, March 30, 2020 - We are excited to announce that Yuji Nishida is the Player of the Week. Look out for great video on the FIVB's social media channels as we celebrate the first ever #FIVBPOTW.

Lausanne, Switzerland, March 30, 2020 - We are excited to announce that Yuji Nishida is the Player of the Week. Look out for great video on the FIVB's social media channels as we celebrate the first ever #FIVBPOTW.
Yuji Nishida’s star shines for Japanese volleyball
Japanese men’s national team player Yuji Nishida’s love of volleyball started at an early age. He says that he first played volleyball in kindergarten because his older siblings played the sport.
From there the 186cm tall Nishida burst onto the world stage for the Japanese men’s national team in 2018. As an 18-year-old, Nishida played in both the FIVB Volleyball Volleyball Nations League and the FIVB Volleyball Men’s World Championship.

#FIVBPOTW - This week's videos:
Tuesday: VNL - Best attacks
Wednesday: VNL and FIVB World Cup - Best serves
Thursday: World Cup - Best attacks
Friday: Get to know Yuji Nishida
Growing up in Inabe
Nishida’s hometown town of Inabe, Mie Prefecture is on the western outskirts of Nagoya and has a population of around 45,000. As a junior high school student, his school team participated in the Japanese Prefectural Junior High School tournament as the representative for Mie Prefecture. With the proximity to Nagoya, it was expected that Nishida would join Seijo High School, a leading high school volleyball programme in Japan. His national team teammate Yuki Ishikawa also attended Seijo. Nishida, however, wanted to remain local and not have to commute to Nagoya every day for school. Instead, he enrolled at Kaisei High School in Yokkaichi, Mie Prefecture.
Kaisei was not a volleyball power and the school had never won the prefectural tournament, which is required to qualify for the All-Japanese High School Championships, or Haruko as it is often called. However, his team could not beat the dominant team in Mie Prefecture, Matsuzaka Technical High School in any of his three high school years. Matsuzaka Technical High School has participated in the All-Japanese High School Championships 37 times and the last five years in a row (including the 2020 tournament).
While a high schooler, Nishida was recognized by the Japanese Volleyball Association as a good player, however, and was selected to play with the Japanese U19 boys’ national team in the 2017 Asian Boys’ U19 Volleyball Championship in Myanmar. Nishida was mainly used as a substitute in the tournament. 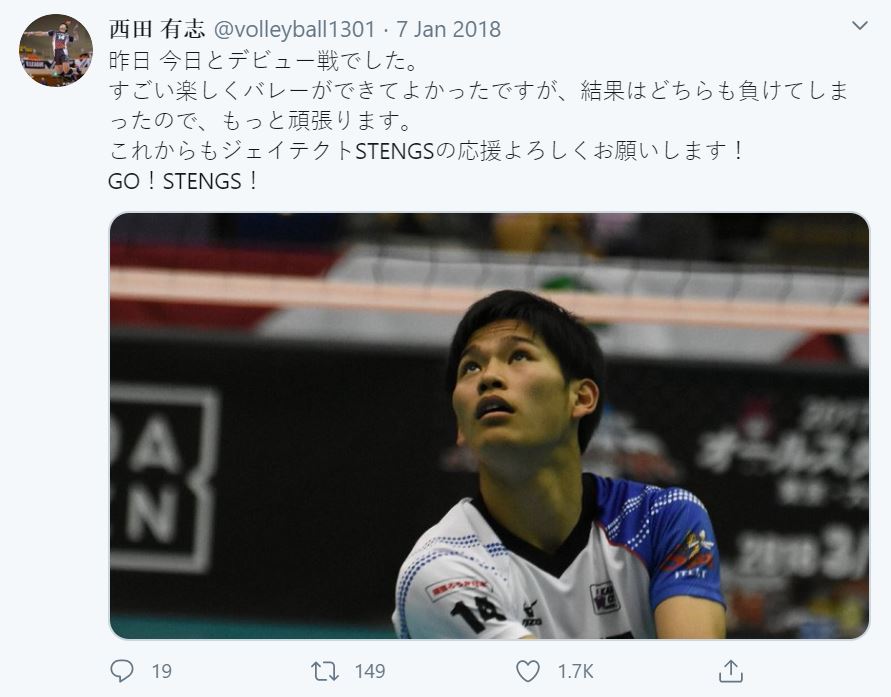 Before graduating from high school in 2018, Nishida joined the JTEKT Stings in the Japanese Men’s V.League. The reason for Nishida choosing to join the Stings was because he had a family connection to the company. His older brother worked for JTEKT and helped him meet with the team before joining them. On January 6, 2018, Nishida made his debut for the Stings in a match against the Sakai Blazers as a substitute and finished with 10 points, all spikes in the 3-0 loss. In his next match, Nishida was made a starter and led his team in scoring with 26 points through 22 spikes, 2 blocks and 2 aces in a five-set loss to JT Thunders Hiroshima. JTEKT barely made the Final 6 playoffs at the end of his first season, and his team did not advance past this round of playoffs.
Playing for Japan
After his professional debut, Nishida was called to the Ryujin Nippon by Head Coach Yuichi Nakagaichi and made his men’s national team debut on May 25, 2018 against Australia in a 3-1 win for Japan. Nishida had 15 points, 14 spikes and an ace in the victory. Nishida played in 12 of Japan’s 15 matches in the 2018 VNL and led the Japanese team in scoring in eight of those 12 matches. With his strong performance in the VNL, Nakagaichi made sure he was on the roster for the FIVB Volleyball Men’s World Championship in Italy in September 2018. Nishida did not see much court time until the third match of first round pool play, against Slovenia, in which he had a difficult night taking 17 attacks to get just six points. From that match, however, Nishida became Japan’s leading scorer in their final two matches. In a 3-1 loss to Belgium, Nishida had 20 points, 13 spikes, a block and six aces. In their final first round pool play tie with Argentina, which Japan had to win in less than five sets to advance to the second round, Nishida scored 30 points, 27 spikes, a block and two aces, to help Japan win the match 3-2, but his team were eliminated from the tournament.
Going into 2019, JTEKT looked to improve in the V.League. They did not make the playoffs, however, and Nishida had to look at improving his play with the national team. In the 2019 VNL, Nishida was a key cog in the Japanese offense, finishing the Preliminary Round of the VNL second in scoring with 219 points and second in serving with 0.39 aces per set. Nishida dominated from the service line against Bulgaria with seven aces in a 3-2 Japan win and in the last match of the Preliminary Round against Germany, he had six more aces.

With Japan hosting the 2019 World Cup, Nishida wanted to see where he was at by the end of the international season. And by the end of the tournament, Nishida had shown that he was one of the best opposites in the world. He finished third in scoring with 174 points, fifth in spiking with a success rate of 55.38%, and was the best server of the tournament with 29 aces and a 0.69 aces per set average.
Nishida demonstrated that he could hurt opponents from the front row, the back row and the service line. And don't forget how he finished off the Canadians in the final match of the tournament serving six times, five of which were unreturnable aces, to end the five-set encounter. Japan with Nishida’s help finished in 4th place, which was their best showing in the World Cup since 1991. Nishida was named the best opposite of the tournament and is ready to push his club team JTEKT in the 2019-2020 season. 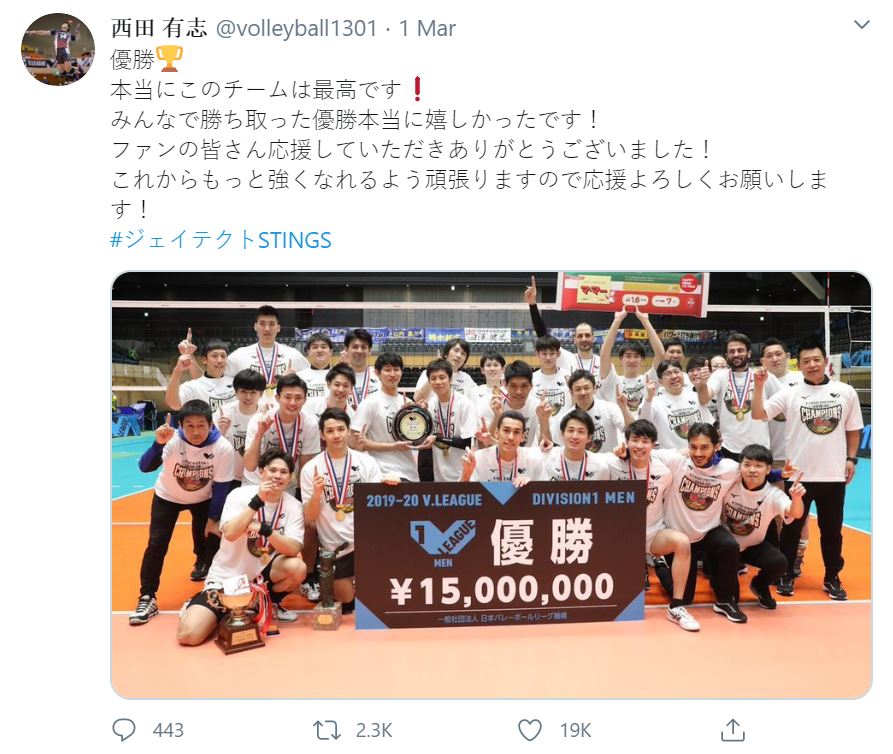 A V.League hero
Nishida upped his game in the V.League this season with JTEKT, who finished the regular season with their best ever record (2nd place at 23-4) and getting the Stings to their first final. In a difficult five-set final against the Panasonic Panthers, Nishida led his team in scoring with 36 points, taking them to their first title and earning the V.League's MVP in the process. Considering one of his opponents in the final was the Polish superstar Michal Kubiak, Nishida is showing that he may have what it takes to take the Japanese men’s national team up the FIVB World Rankings.