Players celebrate King of the Court in Utrecht 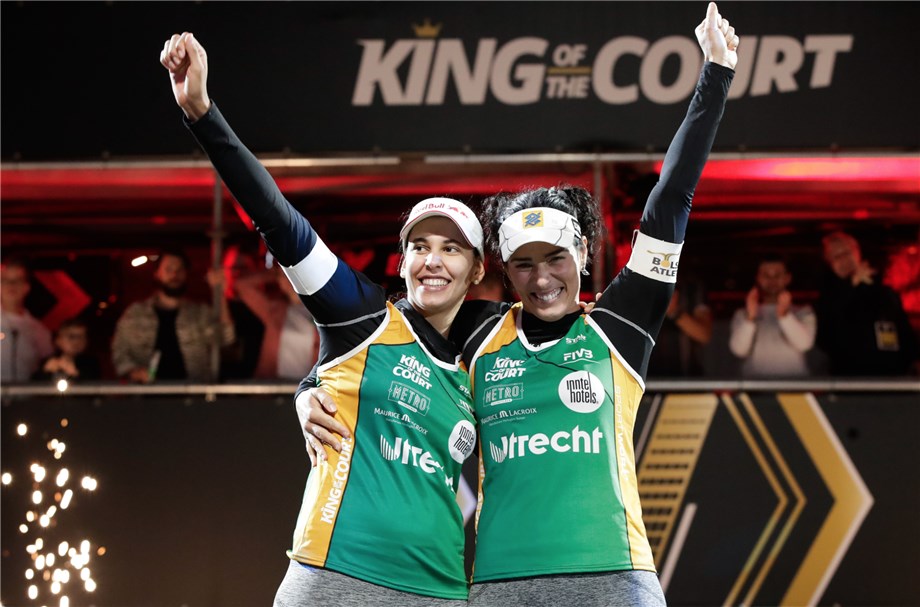 Utrecht, Netherlands, September 13, 2020 - It was with the seconds ticking down in the group phase when it finally happened, the event that so many had mentioned in the lead-up to this weekend’s King of the Court, held in Utrecht: Anders Mol hit a sky ball.
>>> Watch King of the Court 2020 on YouTube.
It was miles out, that sky ball, but it didn’t matter. He laughed. His Norwegian partner, Christian Sorum, laughed. The opponents on the King’s side of the court, Qataris Cherif Samba and Ahmed Tijan, tried, playfully, to keep the serve in bounds, batting it back, to no avail.
A single, playful, comical serve in one phase of a layered weekend says little about the event, and yet it says everything about the event.
“How often,” Swiss player Marco Krattiger said, days prior to the start of the King of the Court, “do you see Anders Mol hit a sky ball?”
The answer can actually be calculated to an exact number: whenever there’s a King of the Court, there will be Anders Mol sky balls. Just as there will be countless other funny and delightful moments you wouldn’t otherwise see on a volleyball court.
Yes, Krattiger, and his young new partner, Florian Breer, won the event, alongside Brazilians Agatha Bednarczuk and Eduarda 'Duda' Lisboa. But, in this strange and gloomy year of Covid-19, everyone, from the players to the fans packing the infinitely cool skybox-stadium, to the announcers and those watching on the livestream from the comforts of their homes, won this weekend.

“It’s amazing,” said Agatha, a veteran of 37 years who medaled nine times in the past two seasons. “We stopped in March, and I know we have teams here that played some national tours but in Brazil, we start only next week. To be at the court is the best feeling.”
It is the best feeling for them, in particular, in this format. For a team so accustomed to massive success, King – or Queen, in this case – of The Court has been a bit of an obstacle for them. Twice they’d played in this format before, twice they finished fourth.
In Utrecht, they picked up the win, fending off a final field that included April Ross and Emily Day, Joana Heidrich and Anouk Verge-Depre, and hometown favourites in Dutch teams Sanne Keizer and Madelein Meppelink, and the precocious van Driel sisters, Emi and Maxime.
“They played very well,” said Duda, who is the younger of the Brazilian pair and two years running voted the Most Outstanding Player in the world. “The young team played very well, very fast.”
In a season mostly devoid of beach volleyball, we were able to see not only the best beach volleyball the world has to offer, but also so, so much more.
We were able to get a glimpse of the new faces, the youngsters in the van Driel sisters. They’d never played an FIVB together before, though both had enjoyed their own measures of success. Mexime, the 21-year-old right-hander, won the Rubavu 1-star a year ago with Iris Reinders. Emi, the 20-year-old lefty, medalled four times in 2019, all with Raisa Schoon, including a pair of golds in Goteborg, Sweden, and Alba Adriatica, Italy.
To see them shine on the biggest stage, against the biggest names in the sport, was a glimpse into the future of Dutch volleyball.
“It’s just amazing. We were so happy to make the final,” Emi said. “It’s just amazing to play with the home crowd.”
We were able to see big moments, like the Netherlands having two women’s teams in the final round of their home event. And we were able to see the micro moments, such as Latvian Janis Smedins turning to Spaniards Adrian Gavira and Pablo Herrera, giving Gavira a fist-bump that said “I got you.” Smedins had just picked up an ace that kept Spain in the mix. Herrera and Gavira, who could be viewed as one of Latvia’s chief rivals on tour, the two best split-blocking teams in the world, were appreciative of their off-court friends and on-court nemesis.
And, unlike they would at, say, a major, or a four-star, they showed that likability.
“That’s one of the great things about this event is that there is kind of a different level of camaraderie,” commentator and United States coach Rich Lambourne said. “In the beach volleyball world there’s this great vibe in general and so many of the teams are friends off the court but this really affords everyone that extra level of camaraderie.”
That camaraderie could be found before and after most rallies. It was in Bartosz Losiak and Piotr Kantor, the ball control wizards from Poland, getting into an unofficial overset contest with Dirk Boehle and Mart van Werkhoven in the early stages. Losiak overset the first, which was picked up by Boehle. After Boehle’s subsequent high line was picked up by Losiak, Kantor back set it over his head for a kill.
A point, and many laughs, ensued.
Just as a point, and many laughs, ensued after Dutch bomber Alex Brouwer threw his hat at Canadian Ben Saxton – in the middle of a point.
They came after Mol playfully threw sand at van Wekhoven after another block of the Norwegian.
These moments didn’t diminish the competitiveness. Rather, they enhanced it. It was an amicable competition, yes, but intense all the same.
It is no coincidence that it was Agatha and Duda, one of the top teams on the planet, that wound up with the crown. Just as it was no coincidence that the men’s final included the torrid Norwegians, a rejuvenated Polish team in Kantor and Losiak, who battled injuries all of 2019, German sensations Julius Thole and Clemens Wickler, Edmonton gold medallist Krattiger and Breer, and Belgian big hitters Tom van Walle and Dries Koekelkoren.
Three of the teams mentioned above – Mol and Sorum, Thole and Wickler, Kantor and Losiak – have either won a major or appeared in a final.
It might be a different format, this King of the Court, but the same rule applies: siding out wins championships.
Siding out, in this case, wins crowns.
“It’s just amazing,” Breer said after winning, fending off a late push from Mol and Sorum. “We were going to go all in, and all in from the service line. It’s amazing, and I’m really happy to play here.”
How did it end, you ask?
A skyball.
Not from Mol, this time, but from Breer, the new King of the Court.
Quick links:
King of the Court 2020
FIVB Beach Volleyball World Tour
Olympic Games Tokyo 2020
Facebook
Twitter
Instagram
Youtube