Playing behind in Gstaad sparks Klineman & Ross to gold 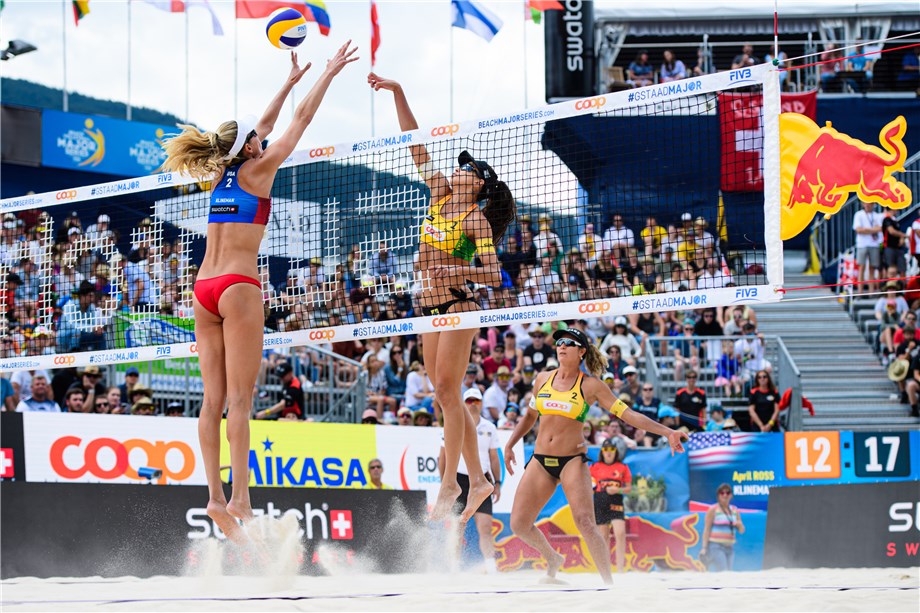 Gstaad, Switzerland, July 14, 2019 - It seemed like all April Ross and Alix Klineman had to do for a week was get behind in a match. Then, look out.
Quick links - Beach volleyball:
FIVB Beach Volleyball World Tour - Gstaad
FIVB World Tour - Daegu
FIVB World Tour - Alba Adriatica
FIVB.com - Beach volleyball
Facebook
Twitter
Instagram
For the fourth time in the 2019 Swatch Major Gstaad, the Americans dropped the first set. For the third time Sunday, they climbed out of that hole and the timing could not have been better as the Americans outlasted Brazil’s Carolina Solberg and Maria Antonelli of Brazil, 2-1 (15-21, 21-17, 15-12).
It was a measure of redemption for Ross and Klineman, who a week earlier lost in the gold medal match of the FIVB World Championships in Hamburg.
“We had a terrible start to this tournament and a devastating loss last week and so to bounce back like this and fight as hard as we could with some slow starts to matches, like in the final, I’m really proud of how we stayed together and kept our attitudes positive,” said Ross, who collected her second cowbell in the famed tournament in the Alps. “That was huge. I really feel like our communication helped win that match.”
It was the third FIVB World Tour victory for Ross and Klineman during the 2019 season to go with Itapema, Brazil and Yangzhou, China. They earned US$40,000 and scooped up 1,200 Olympic qualifying points.
Ross captured a silver medal with Kerri Walsh Jennings in 2016.
It was the second cowbell for Maria, who won the 2009 tournament with Talita Antunes, and first for Carol, who joins her brother Pedro as the only brother-sister siblings to bring home the iconic award. Maria and Carol, who picked up $32,000, were bidding to become the first women’s team to win after emerging from the qualification tournament.
“Of course, now we just lost the finals and I’m sad, of course I would really love to win this tournament,” Carol said. “I think me, and Maria played very well the whole tournament. It’s important to feel that we can do it, that’s really important for our team.” 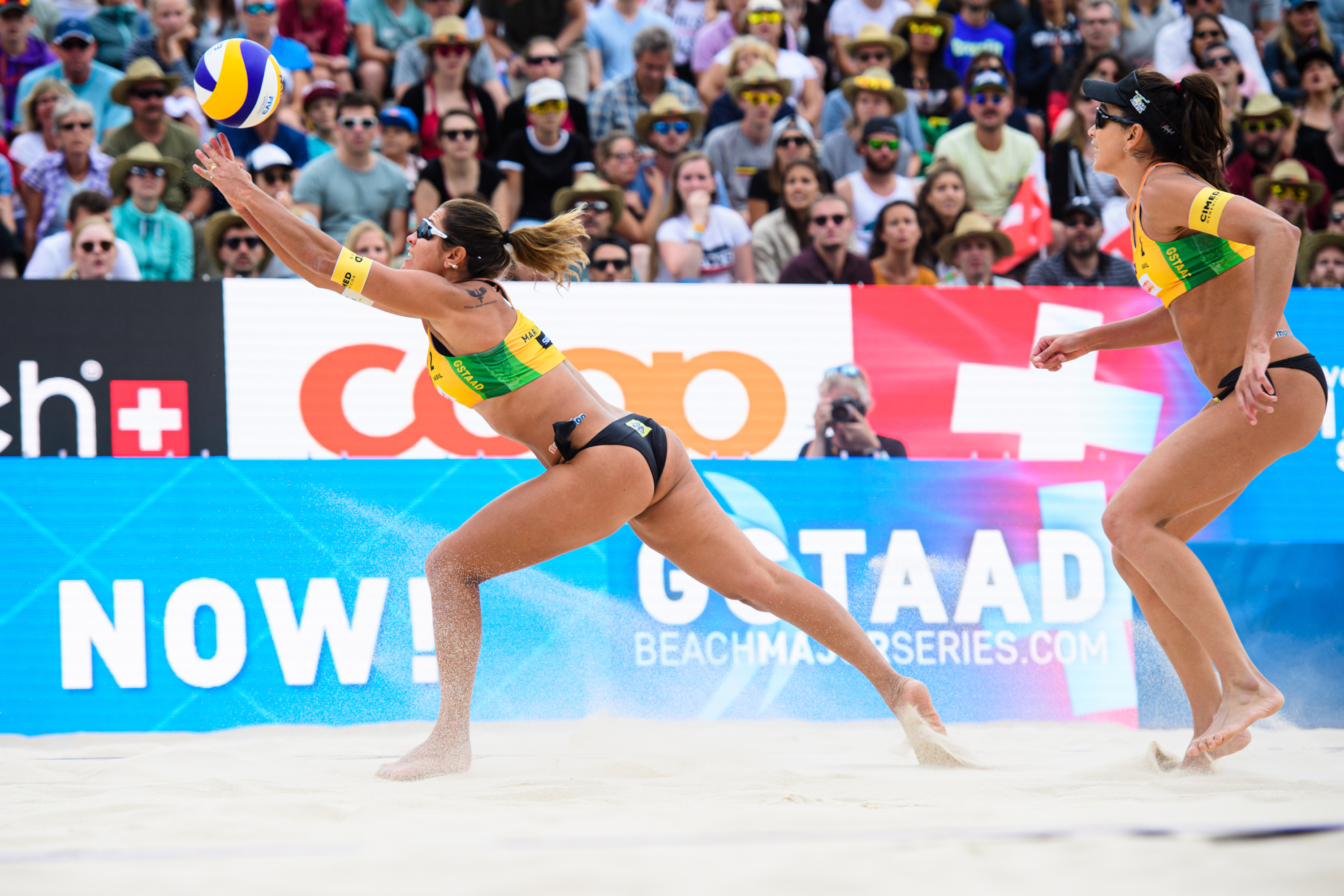 Reaching for Mikasa is Maria Antonelli (left) as Brazilian partner Carolina Salgado follows the action.
The match was a milestone on the FIVB World Tour. It was the 100th gold-medal showdown between the United States and Brazil and the USA now holds a 55-45 advantage in those showdowns.
Brazil also capture the bronze medal when Ana Patricia Silva and Rebecca Cavalcanti broke the host country’s heart by defeating Nina Betschart and Tanja Huberli, 21-14, 21-12.
“It makes our journey even more special,” Ana Patricia said of her team’s first medal in a 5-star event. We’re trying to qualify to the Olympics, and this is the kind of result that will help us on that.”
The Swiss duo, which also finished a gut-wrenching fourth in the World Championships, led Ross and Klineman, 18-11, in the first set of the semifinal before the Americans steadied themselves and pulled off an epic comeback for a 22-20, 21-17 victory.
“That’s kind of the story of the tournament,” Klineman said. “I feel like we for whatever reason find ourselves in some tough spots and we just keep believing and keep fighting and learning about the game. That’s what really prevailed.”
Including the World Championships, Klineman and Ross have played in 15 matches since June 29. But their finishes have given them a huge advantage in the race for an Olympic qualification designation for the United States.
At times, they’ve had their confidence shaken a bit. What they are most impressed with, however, is their ability to stay with the task at hand.
“It’s funny because it only takes one bad match for us to think were terrible volleyball players,” Ross said, laughing. “When we are playing good, it doesn’t even need to be perfect volleyball, we can still beat almost anybody. That’s a lesson we’re trying to learn.”