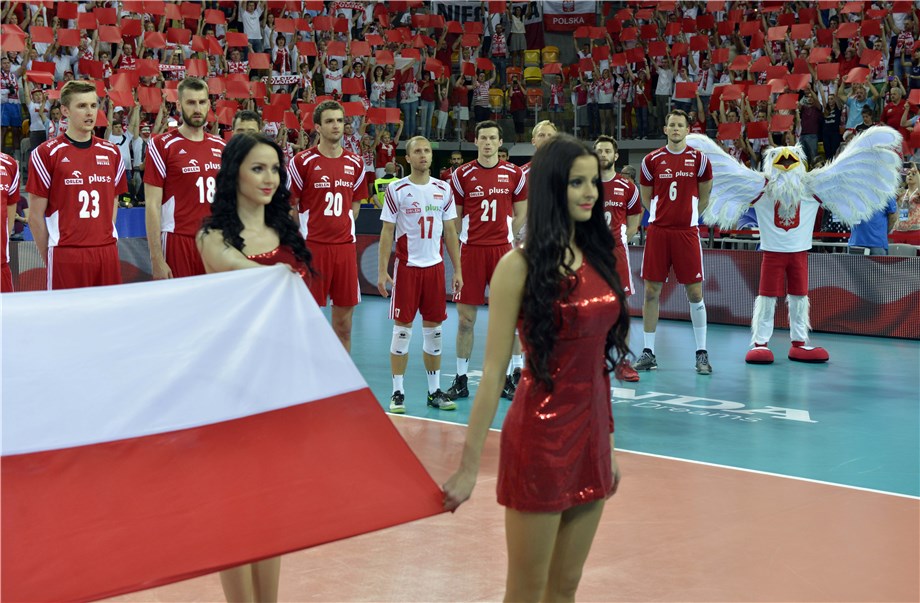 Czestochowa, Poland, June 6, 2015 - The match proved a lot harder than yesterday's 3-1 victory, but MVP Michal Kubiak managed to lead Poland to a 3-2 (22-25, 25-22, 25-16, 22-25, 15-6) win over Iran on Saturday.
There was no separating the two teams for much of the first set. A misunderstanding between Poland's setter Drzyzga and middle blocker Nowakowski, followed by an ace from Seyed and Ghaemi's single block on Kurek gave Iran a three-point lead at the second technical time-out. The visitors controlled the situation from now on and snatched the opener 25-20. The second set also started with both teams exchanging successful spikes before three simple errors by Iranian players allowed Poland to break away at 13-8. Consistent offensive game from Poland's Mika, Kubiak and Bieniek helped Poland maintain the lead. The set was not without its drama, though, as the visitors managed to save two set points in a row to make it 24-22. A controversial challenge on the next point handed Poland the second set, but the Iranian team were visibly disappointed with the decision.
The home side carried momentum into the following set by quickly getting ahead. Fantastic serves from Bieniek and Kubiak gave Poland a 13-9 lead. Young gun Bieniek played amazingly well in attack and block as well, leading Poland to a 25-16 victory. He finished the first three sets with an unbelievable 100% efficiency in attack. In the fourth set tensions were flying high as at one point Kubiak and Seyed earned a red card each. Iran found a way to stop Bieniek and Kubiak and took a modest 16-14 lead at the second time-out. A few moments later the visitors blocked Kurek as well making it 21-18. Poland, who were also struggling in reception, had no ammunition to counter the powerful attack game from Mahmoudi and conceded the set 25-22.
The tie-breaker quickly got away from the visitors as consistent attack and blocking game from Poland saw them race out to an 8-2 lead. Much to the delight of the home fans Poland calmly finished the set at 15-6. Today's victory means Poland remain unbeaten in the 2015 World League with four home wins against Russia and Iran.
To see the match gallery, read the full match live commentary and post-match comments, visit the match page.