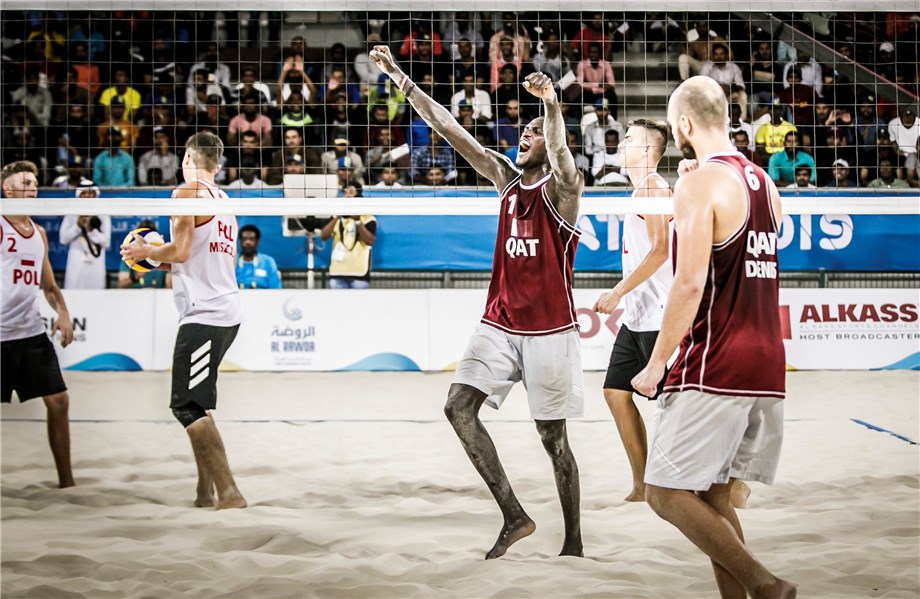 The Qatari team celebrate a point

Doha, Qatar, October 15, 2019 – Gold at the men’s beach volleyball 4x4 tournament at the first-ever ANOC World Beach Games will be contested between the national teams of Qatar and the United States. After winning their respective semifinals on Tuesday in Doha, they will face each other in Wednesday’s big final at 19:30 (local time) at Katara Beach in the Qatari capital. Indonesia and Poland will play for bronze at 17:00.

The first set in the USA vs. Indonesia semifinal started better for the Americans, but with Rendy Licardo on fire again their opponents managed to catch up and even momentarily step in front on the scoreboard. The US team did not lose their cool, regained control and once again opened a wide gap. At set point, Maddison McKibbin out-jumped Licardo at the net to close it off at 21-15. The second set was all about the United States. Maddison continued to reign at the net and it was again he who closed the set off with a spike at 21-12. It was one of his 11 points in the match, which made him the best scorer for the winning side. However, Rendy topped that for Indonesia with 16 points to his name.
“We started this whole tournament with a different strategy from where we ended up,” commented Maddison McKibbin. “It took a few matches for us to figure it out. I think we have found our rhythm and we are only going to get better. I am stoked to have had a great semifinal match and I like going into the final tomorrow with such confidence.” 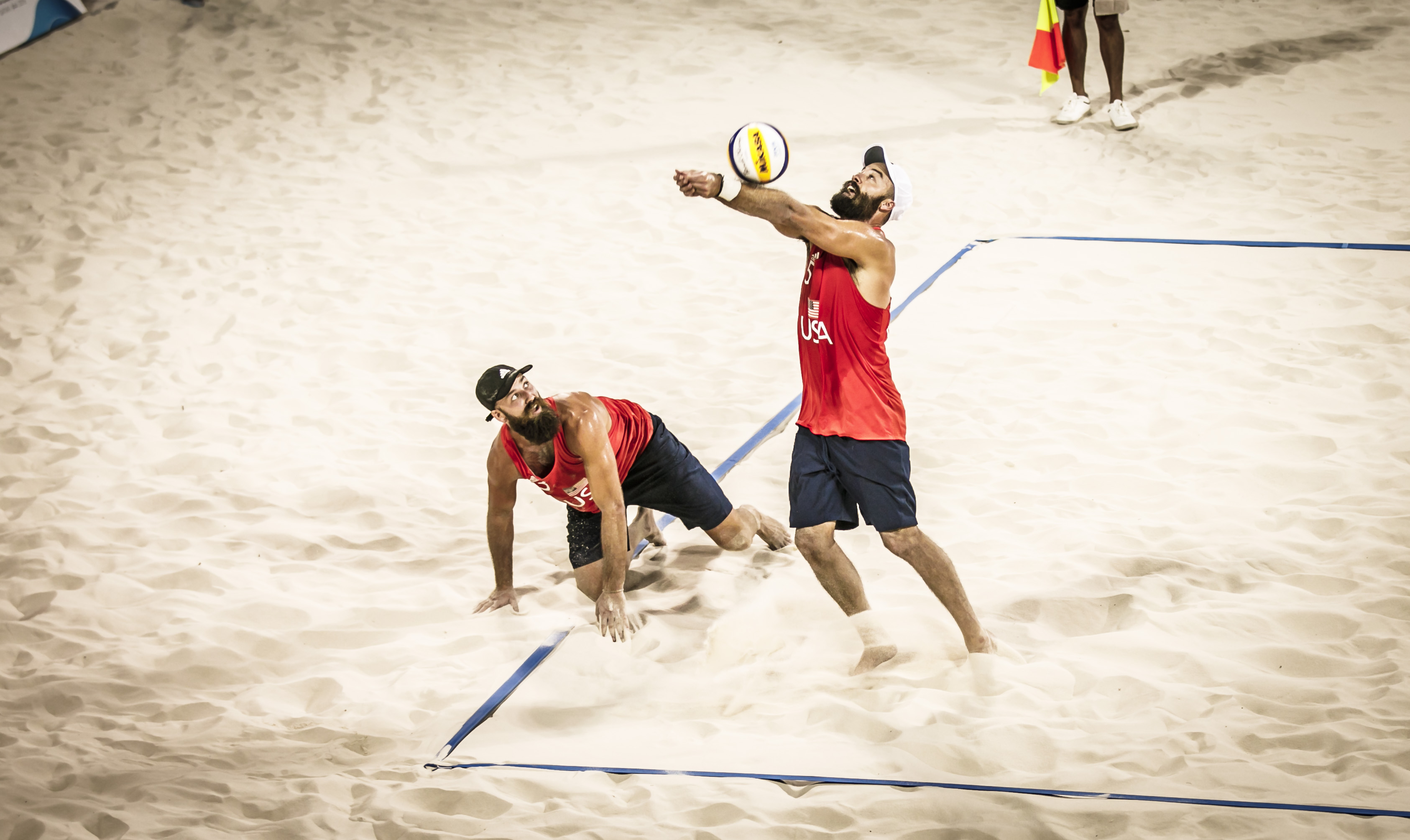 USA’s McKibbin brothers in action during their semifinal against Indonesia
The first set of the second semifinal delivered a fierce battle for every point, with Poland maintaining a slight lead for a while. A monster block by Saif Elmajid finally gave Qatar a 19-18 lead, but their opponents stayed afloat and denied three Qatari set points before letting it slip away on an attack error – 24-22 in favour of the home team, to the delight of the home fans. Cherif Younousse stepped up his efforts at the net during the second set and the home team took complete control of the scoreboard. Within the incredible ambience created by both the home crowd and the Polish fans at centre court, Qatar cruised to a 21-15 win to book their ticket to the final. Cherif was the game’s best scorer on 17 points.
“To be honest, it was very difficult to picture us in the final before the competition,” Qatar’s Ziad Benlouaer admitted after the match. “It’s a new team with new players preparing for the last three weeks. But it will be a pleasure to play the final at home. We went through the pool stage without a loss and we built up our confidence. The semifinal was a very tough game. The Polish team did very well. The Americans didn’t show all their cards in the first match we played, but I think the final will be a different story. They want a re-match, but we’re not going to give them this pleasure. It’s our game and our crowd and we deserve this.” 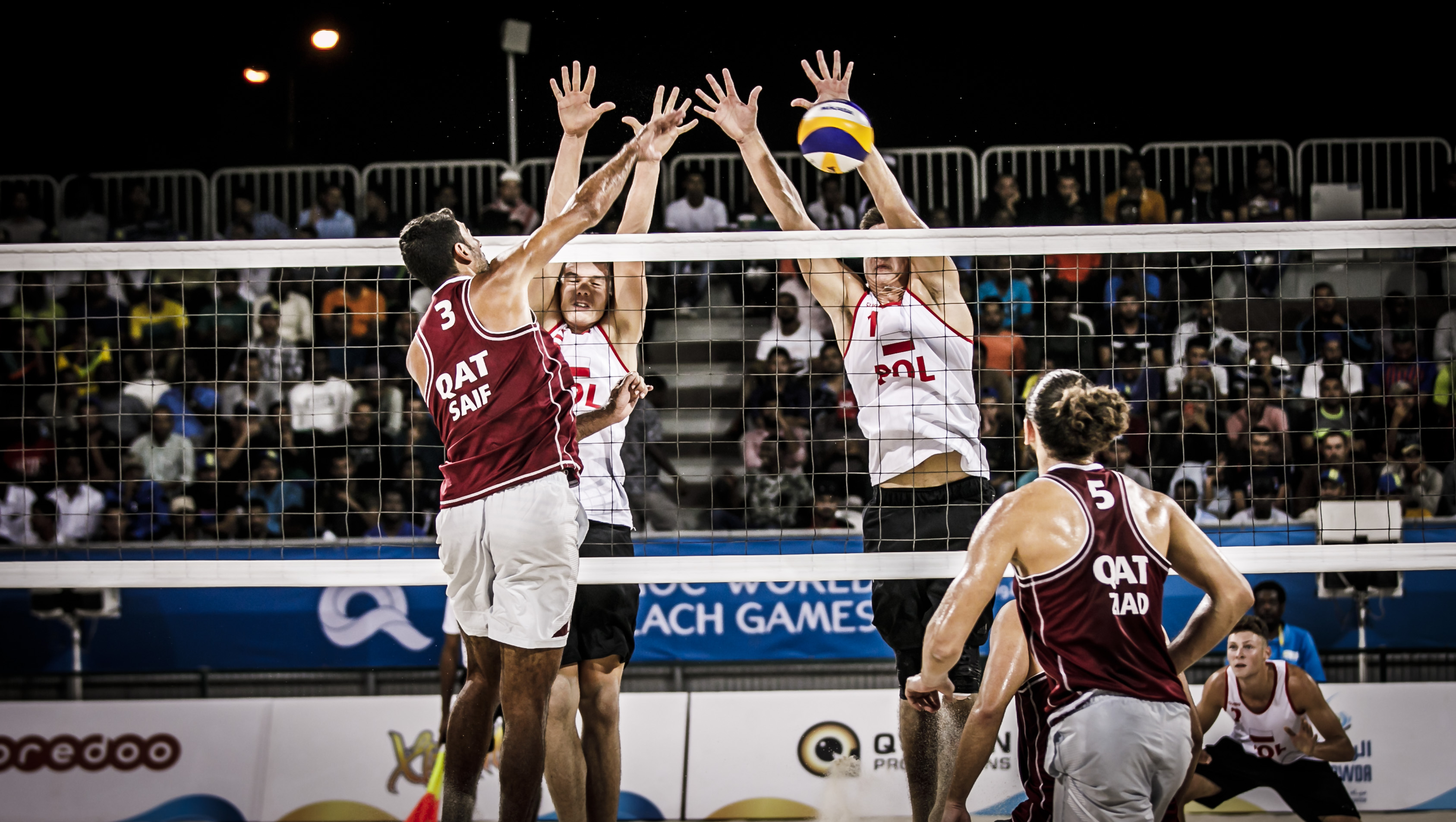