Qualifying Tuesday at the Gstaad Major 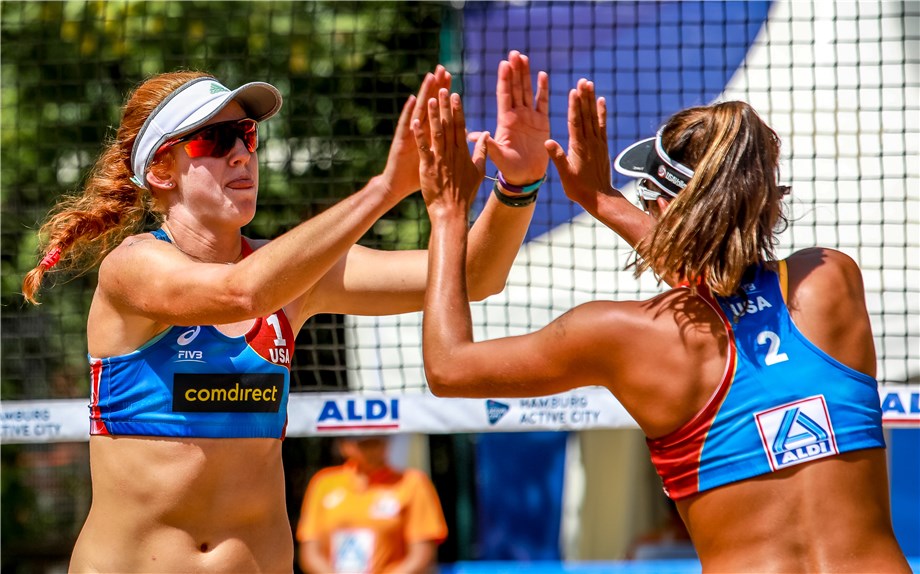 After placing ninth this past week at the 2019 FIVB World Championships in Germany, Kelly Claes (left) and Sarah Sponcil advanced to the Swatch Major Gstaad qualifier after winning an Amerian country quota match Monday in the Swiss Alps village

Gstaad, Switzerland, July 8, 2019 - The first serve for the 20th anniversary of the Swatch Gstaad Major will be here Tuesday when 32 men's and 32 women's teams will be competing in single-elimination qualifying tournaments to advance eight pairs per gender to the main draw rounds in the $600,000 FIVB World Tour event.
Quick links - Beach volleyball:
FIVB Beach Volleyball World Tour - Gstaad, Switzerland
FIVB.com - Beach volleyball
Facebook
Twitter
Instagram
Preliminary country quota rounds were held Monday where one Brazilian and two American teams advanced to the qualifying rounds on the Swiss alps village courts where the first event was held in June 2000 with a women's-only tournament attracting 55 teams from 24 countries with $150,000 in prize money.
The longest-running event in the history of the FIVB World Tour that started in 1987 for men and 1992 for women, a total of 121 teams from 33 countries (65 men’s teams from 28 countries and 56 women’s teams from 25 countries) have entered the 2019 Swatch Major Gstaad where the winning teams will be awarded their medals Saturday for men and Sunday for women.
In country quote play, only one of the three teams that competed at last week's FIVB World Championships in Germany advanced from Monday preliminary rounds as Kelly Claes and Sarah Sponcil won the women's three-team playoff for the United States.
A ninth-place finisher in the Hamburg worlds, Claes and Sponcil ousted compatriots Emily Day and Betsi Flint with a 2-0 (22-20, 21-16) victory in 37 minutes.  Earlier Monday afternoon, Day and Flint posted a 2-1 (17-21, 24-22, 15-11) elimination win in 47 minutes over Sara Hughes and Summer Ross, who placed fifth in the 2019 world championships.
On the men's side, Saymon Barbosa and Gustavo "Guto" Carvalhaes won the Brazilian country quota match by ousting Vitor Felipe/Pedro Solberg with a 201 (21-14, 16-21, 23-21) win in 62 minutes.  Vitor Felipe and Pedro placed 17th last week at the world championships.
In the American playoff, Chase Budinger and Casey Patterson eliminated compatriots Theo Brunner/Reid Priddy with a 2-1 (16-21, 21-16, 20-18) victory in 47 minutes.