Quincy Aye of France gets up for the block in last year's Tokyo Open of the FIVB World Tour.

Lausanne, Switzerland, March 3, 2020 - France's Quincy Aye, who alongside team mate Arnaud Gauthier-Rat is getting ready to make his first appearance of the season at the four-star Katara Beach Volleyball Cup Doha 2020 from March 8 to 13, says he doesn't feel any pressure to become the first French team since Athens 2004 to make the Olympic Games this year.

"[I don't] really [feel any pressure]," he said in an interview for the French Volleyball Federation website. "I would say on the contrary that if we qualify, it will be a double satisfaction - that of playing at the Olympic Games and that of allowing France to be at the Games, which has not happened to it for years. It would be huge and it makes us want to do it even more."

But to get to the Tokyo 2020 Olympics, Aye and Gauthier-Rat need to do well in the three upcoming tournaments of the FIVB World Tour, with Australia's Coolangatta Beach, Gold Coast and Mexico's Cancun following that of Doha. 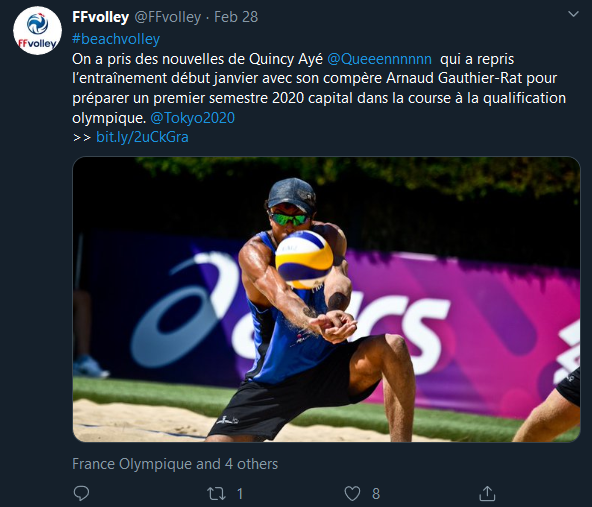 "These are big stake tournaments, because if we want to seek qualification through the ranking, we will have to make results," added Aye. "A priori, in Doha, we will go through the qualifications, that means we will have to manage to pass to play the main draw. As for the Olympic ranking, we are now seven places from the Olympic Games. It's playable. Otherwise, we have the Continental Cup in May and June."