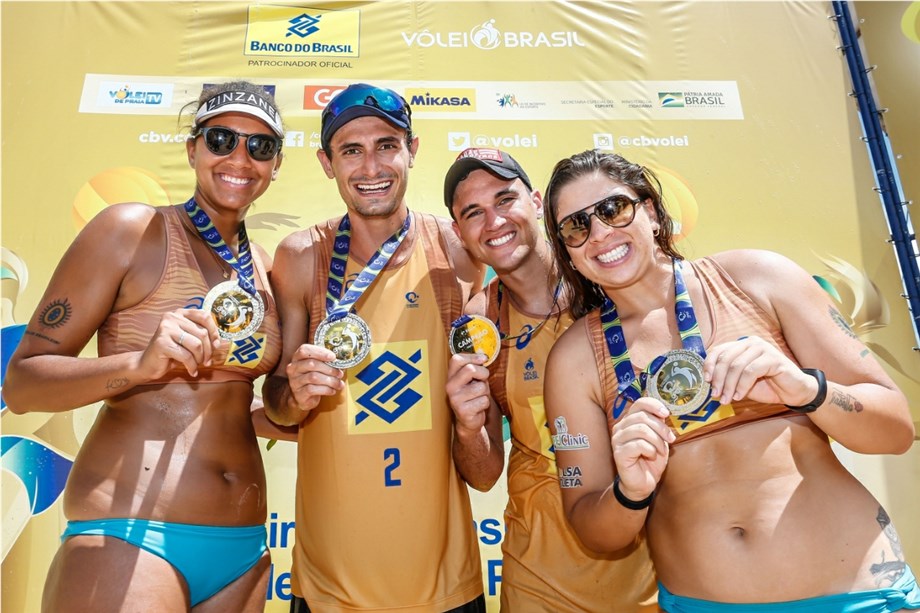 Joao Pessoa, Brazil, January 26, 2020 – The first appearance of several new partnerships might have been the highlight of the first event of the Brazilian Beach Volleyball Tour in 2020, but it was the long-standing duo of Rebecca Cavalcanti and Ana Patrícia Silva that took home the coveted gold medals in Joao Pessoa.

The team, which is at the top of the provisional Olympic rankings, secured the first place in the tournament with a 2-1 (21-19, 19-21, 15-8) victory over veterans Talita Antunes and Carolina Salgado, who were playing together for the first time.

“We’ve been training for just two weeks, so we’re far from our best shape, but this is one of our favourite tournaments and we didn’t want to skip it,” Rebecca commented. “Ana had to deal with some pain in her back so I tried to help her though the match, but our victory was only possible because we stuck together.”

Taiana Lima and Fernanda Berti, who were reunited for the first time since 2015, a year in which they were second at the FIVB World Championships, won bronze with a straight-set 2-0 (21-19, 21-17) triumph over veterans Juliana Felisberta and Josi Alves. Fernanda’s former partner Bárbara Seixas and her new teammate, Carol Horta, were ninth in their first tournament together.

The men’s tournament didn’t feature the country’s top teams of Alison Cerutti/Alvaro Filho and Evandro Gonçalves/Bruno Schmidt, which are both still in pre-season mode, and 2017 world champion Andre Loyola and his partner George Wanderley took advantage of their absences to top the podium.

“They’re a very good team and we knew it would be hard as it was every other time we played them,” Andre reflected. “And there was also the pressure of playing at George’s home. I think that we felt it a little bit in the first half, but George played a fantastic match and made the difference for us.”

The Brazilian Tour continues next month with the fourth of seven tournaments set to take place in Maceio from February 12-16.