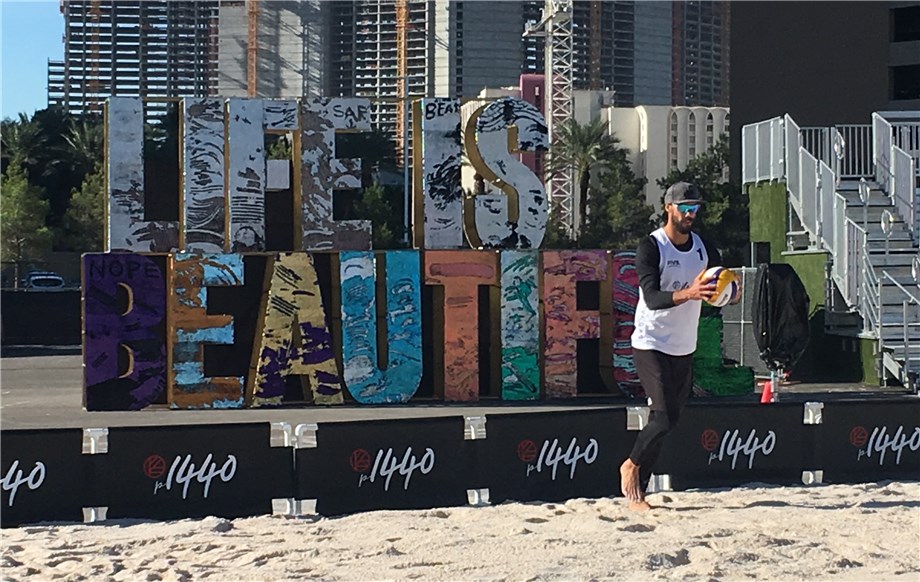 Las Vegas, USA, October 17, 2018 – It has been two years since American volleyball Olympic champion Reid Priddy decided to start a new career in beach volleyball. The legendary player has enjoyed some success in the sands, but results are not what make him the happiest about his new job.
Priddy, who’s competing at the FIVB Beach Volleyball World Tour Las Vegas Open presented by p1440 this week, is kicking off his second season at the beach and he could not be any happier about the lifestyle he has embraced in the past couple of seasons.
“It’s been a lot of fun and a lot of air miles,” the American joked. “It’s been great to get to know these guys and live this life, which is awesome. A lot of indoor players look forward to make this transition once they reach their career finish because it’s great on your body and it’s a very fun game, especially at the international level. I really like playing against these other countries.”
Playing internationally, however, has not been a constant on Priddy’s brief beach volleyball career so far. The 41-year-old defender has competed in just five World Tour events since he made the transition and that is something he is looking forward to change as the 2018-2019 season starts.
Like anyone climbing the international rankings ladder, Priddy is struggling to earn enough points to be entered in some of the most important World Tour events and that is something that makes the four-star Las Vegas Open even more important for him and partner Jeremy Casebeer.
“The system is not very open and it can take you several years just to qualify,” Priddy explained. “Our country has a limit of teams for each event and there are lots of great teams in front of us in the line and we have to pay our dues. There’s about 40 events over the next two years and I hope to play in at least half of them. But we have to earn the right to be there.”
If getting international results is still a work in progress for the American journeyman, part of his beach volleyball checklist has been completed as he secured a competitive partner in Casebeer.
The 29-year-old blocker is one of the best servers in the American pool of players and the team has posted some good finishes in the American national tour, including four semifinal appearances in just seven tournaments.
“We’re an athletic and aggressive team,” the veteran added. “We’ve put together a solid team this year and we didn’t have much practice beforehand, so it has been really fun.”
Quick links - Beach volleyball:FIVB Beach Volleyball World Tour - Las VegasFIVB.com - Beach volleyballLatest VideosFacebookTwitterInstagram