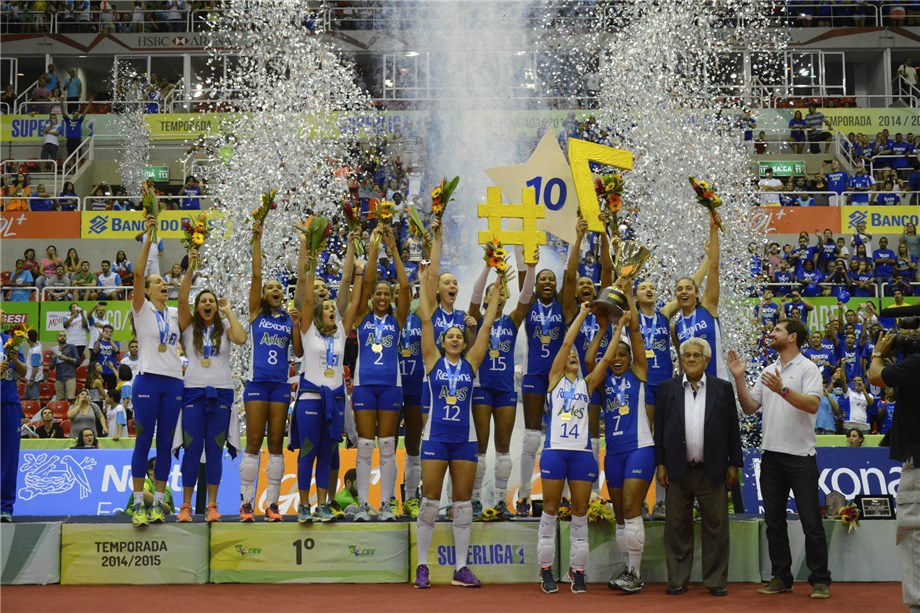 Superfinal – that’s the name of the gold medal game in the Brazilian Superliga, and this year’s edition was without a doubt worthy of its name with over 16,000 spectators at the big game at the HSBC Arena in Rio de Janeiro – and several millions were glued to their televisions at home.

This big interest didn’t surprise since this year’s gold medal game was very promising: reigning champs Rexona Ades, who had been defeated only once over the whole season, were keen to defend the crown against their old rivals Molico Nestlé from São Paulo.

The team from the former Brazilian capital was even more willing since a big career was about to come to an end after the game: Rexona Ades’ setter Hélia Souza, better known as Fofão, had announced that she would end her long and successful career after the 2015 FIVB Volleyball Club World Championship in Zurich – and as a consequence, this Superfinal was Fofão’s last game on home soil. Molico Nestlé, on the other hand, wanted to take revenge for the bitter defeat at the South American Women’s Club World Championship in front of their home crowd. Everything was set for an epic Superfinal.

Local heroines Rexona Ades started strongly with the team from Rio de Janeiro seizing their home-field advantage and didn’t disappoint their 14,000 supporters in the stands. The team from the foot of Sugarloaf Mountain were able to block Molico Nestlé’s top strikers Thaisa Menezes, Ivna, and Kenia Carcaces effectively. On the other hand, Bernardinho’s squad overwhelmed the “Paulistas” with good variety in their attacking game – which resulted in a 16-8 lead.

Molico Nestlé coach Luizomar was forced to take both his timeouts to calm down his players. Molico Nestlé improved their game and shortened the deficit but couldn’t pull back the set, which eventually fell to Rexona Ades 25-21.

The two teams kept the pace high in the second set, Molico Nestlé, however, started to struggle and committed more unforced errors than Rexona Ades, which proved the difference in the very beginning of the set. The reigning champs never gave away their lead and clinched the second set 25-23 after another unforced error by Molico Nestlé. The team from the Sugarloaf Mountain was merely one set away of the epic “Décima”.

Molico Nestlé were under pressure now. They had to improve their game in the third set if they wanted to keep their last hope alive – and they did. Luizomar’s players took over the reins. The “Paulistas” were even ahead 10-6 and it looked like a comeback; but suddenly the silver medallists of last year’s FIVB Volleyball Women’s Club World Championship couldn’t handle the pressure. Rexona Ades took advantage of Molico Nestlé’s down turn and made an incredible comeback. The excitement in the stadium had no limits when the local heroines booked match point at 24-18. And eventually Rexona Ades sent their home crowd into hysterics with their closing point to the 10th title in club history.

Nevertheless, there’s no time to rest for the old and new Brazilian champs as the team is going to fly to Switzerland next week to compete at the 2015 FIVB Volleyball Women’s Club World Championship in Zurich.