Riley McKibbin: Snow volleyball is one of the best volleyball events I’ve ever been part of 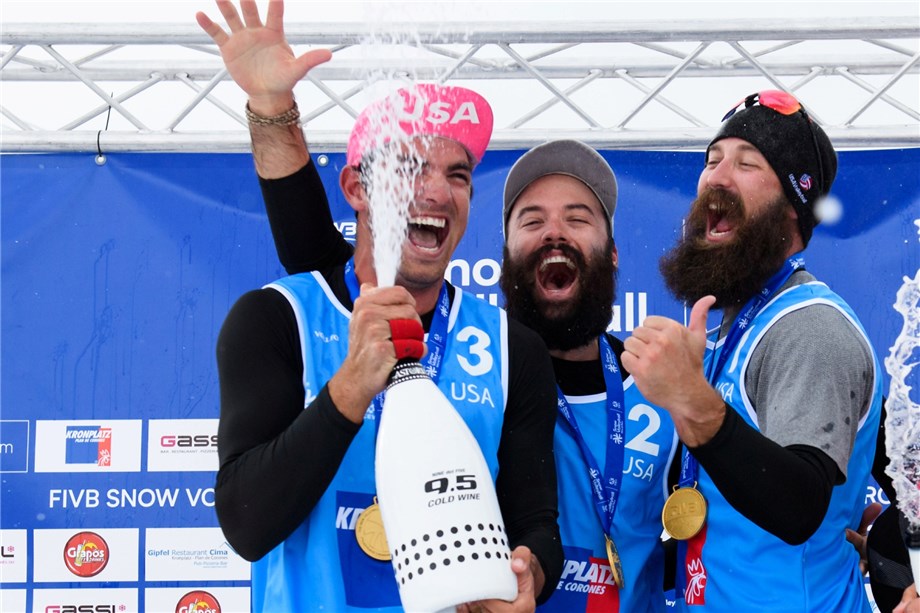 Lausanne, Switzerland, July 9, 2019 – On April 7, in a nail-biting final, USA snatched a 2-1 (9-15, 15-13, 22-20) extended tie-breaker victory over Russia to win gold at the FIVB Snow Volleyball World Tour event in Plan de Corones / Kronplatz. It was the rookie World Tour appearance for the three members of the American team - Riley McKibbin, Maddison McKibbin and Troy Field, after testing the snow for the first time at a Snow Volley Italia tournament in Prato Nevoso the previous week, and they made headlines by sensationally making it from the qualifications all the way to the top of the podium. Three months later and less than a month before their next snow volleyball appearance, in Bariloche, Rio Negro in Argentina, 30-year-old setter Riley McKibbin talked to fivb.com about their amazing experience.
What prompted you to register for the Bariloche stop on the FIVB Snow Volleyball World Tour?
Riley McKibbin: Upon entering the snow volleyball tournament in Kronplatz, Italy we had heard whispers of another tournament to come in the middle of summer, yet this time in the southern region of Argentina. The three of us have never ventured that far south on the map and we were immediately intrigued with the possibility of competing in Bariloche. And after our amazing experience playing snow volleyball for the first time both in Prato Nevoso and in Kronplatz, we knew Bariloche was a must.
Please introduce the new member of your team – Jameson McKibbin.
Riley McKibbin: The newest addition to our former team of three is the third McKibbin brother, Jameson McKibbin. Jameson is both a beach and indoor volleyball player at the University of Southern California. In Kronplatz, our team was quite possibly the only team of three, which created some problems for us especially on the day of the qualifier, where Maddison woke up with food poisoning and we had no one to replace him with, nearly causing us to drop out of the tournament. Jameson is an incredible setter, defender and server, with a high "volleyball IQ” and we are confident he will be able to come in and contribute to the team in Bariloche. 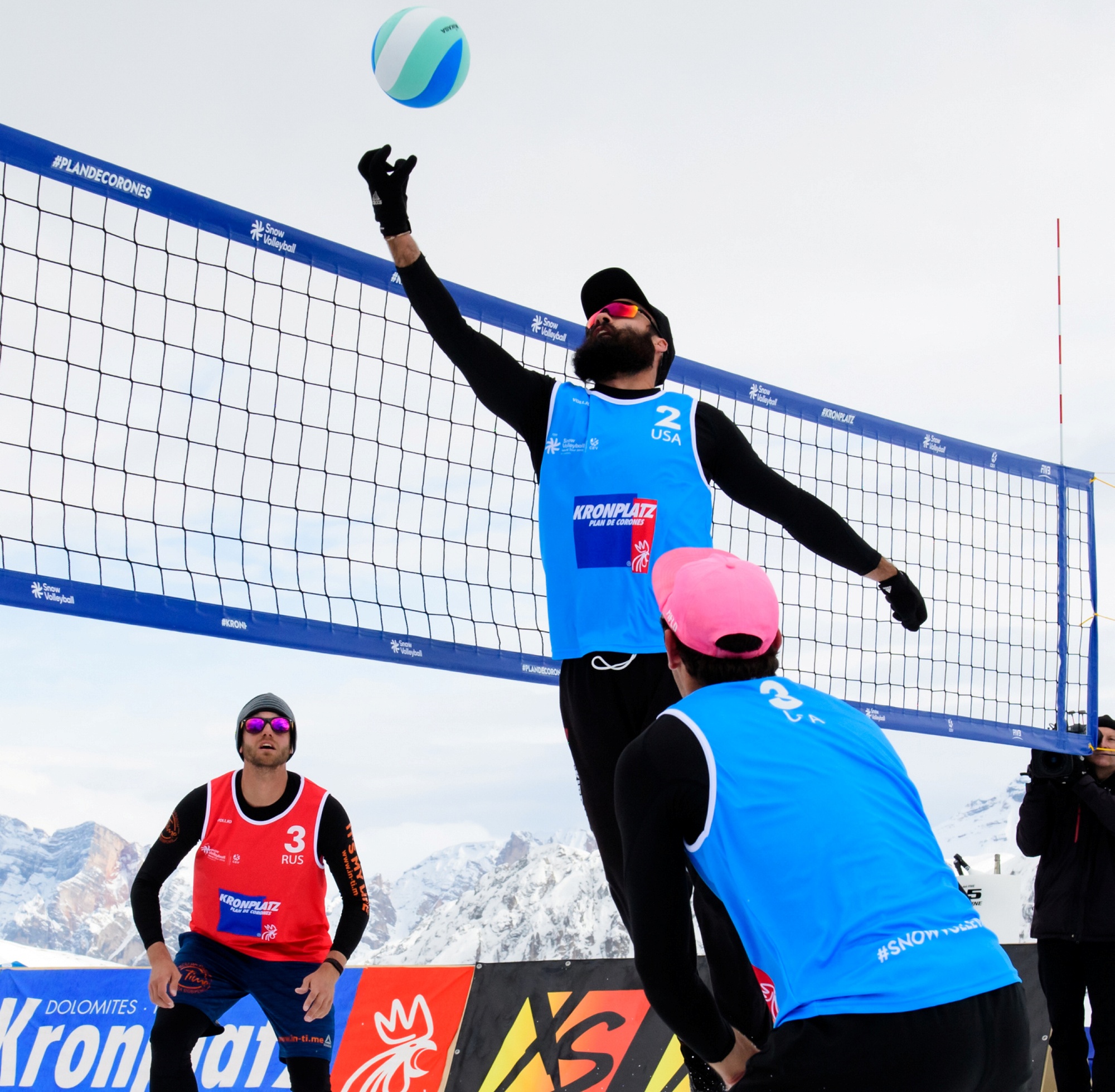 Riley McKibbin with a one-hand set during the Kronplatz final
After you tried snow volleyball for the first time earlier this year, did you change anything in your daily training routine? Are you doing anything special to prepare for Bariloche?
Riley McKibbin: It is very difficult for us to properly prepare for a snow volleyball tournament while we are in the middle of summer in southern California. The weather conditions even in winter don’t get cold enough for it to snow where we live. However, after gaining some very much needed experience both in Prato Nevoso and Kronplatz we have a better grasp of how to play this new and exciting (and very different) variation of volleyball.
You were super excited and super emotional when you triumphed with the gold at Kronplatz. How do you reflect on that success three months later and back on the hot beaches of California?
Riley McKibbin: I’ve talked with both Maddison and Troy in length about that final match in Kronplatz. For over 90% of that match we did not think we would come out victorious. That is the truth. The Russians’ strategy and experience was something we most certainly were not prepared for. That match could have easily gone either way and it was one of the hardest fought battles any of us have ever been a part of. When you find yourself in a seemingly never-ending match like that, the final point that concludes the match often comes as an incredible surprise and a surprise it was indeed for us. We were honestly shocked and the emotion we felt was raw and true and is a moment we’ll all never forget.
What kind of reactions did you get when you went back home as snow volleyball champions?
Riley McKibbin: The snow volleyball final we played against Russia was aired on multiple networks in the USA and my brother and I put together more than a handful of YouTube videos centred around snow volleyball that have amassed about a quarter of a million views at this point. Three vs. three means longer rallies, increased drama, an exotic terrain, all played at the top of a mountain. So, safe to say, the word is out about this new spin on volleyball.
Other than topping the podium at Kronplatz, what is your best memory from snow volleyball?
Riley McKibbin: My favourite memory about snow volleyball? It honestly wasn’t winning that final point of the tournament nor mounting the podium. The entire experience of the tournament seemed like a dream, I mean we were playing on the peak of a mountain in Italy, just saying that doesn’t sound real, almost fantastical. But my favourite memory was of the people. I’ve never seen such a joyous and passionate group of competitors, having the time of their lives, taking it all in. Win or lose, it was indeed a happy time for everyone who was there and was without a doubt one of the best volleyball events I’ve ever been a part of.
Related articles:
Teams from five continents sign up for Snow Volleyball World Tour event in Argentina
McKibbin brothers pick top 10 snow volleyball plays
Spectacular final brings first World Tour gold to USA
The McKibbins: What better place to compete than top of a mountain!
Quick links - Snow volleyball:
FIVB Snow Volleyball World Tour - Bariloche, Rio Negro
FIVB.com - Snow volleyball
Rules of the Game 2018-2020
News
About