Sao Paulo, Brazil, May 18, 2020 – Legendary libero Sergio Santos announced the end of his playing career this weekend. The 2019-2020 Brazilian Superliga season will be the last for the 44-year-old Brazilian, usually known as Serginho.

Sao Paulo, Brazil, May 18, 2020 – Legendary libero Sergio Santos announced the end of his playing career this weekend. The 2019-2020 Brazilian Superliga season will be the last for the 44-year-old Brazilian, usually known as Serginho.
The veteran libero wore the Brazilian national team jersey for the best of 15 years between 2001 and 2016 and amassed an impressive collection of medals and trophies with the team. Serginho won two FIVB Volleyball World Championships (2002 and 2006), two FIVB Volleyball World Cups (2003, 2007) and seven FIVB Volleyball World League golds (2001, 2003, 2004, 2005, 2006, 2007 and 2009). He was the Most Valuable Player of the 2009 World League, becoming the first libero to receive the honour.
His Olympic achievements alone put Serginho in a very special class of player. They include gold medals at the Athens 2004 and Rio 2016 Games and silver medals at Beijing 2008 and London 2012. The libero is one of just three male players to secure four Olympic medals. Italian Samuele Papi (silver at Atlanta 1996 and Athens 2004 and bronze at Sydney 2000 and London 2012) and Russian Sergey Tetyukhin (gold at London 2012, silver at Sydney 2000 and bronze at Athens 2004 and Beijing 2008) are the two others.
Serginho is the only man to play in four consecutive Olympic finals and his four medals are the most a team sport athlete has ever won for Brazil. Shortly after being named the Most Valuable Player of the Olympic tournament in Rio, Serginho had his farewell match with the national team, which drew 35,000 fans to the stadium.
“I’ve been trying to find a way to leave the sport since the Rio Olympics, but people wouldn’t let me,” he said, joking. “Every season a new challenge came up and I’ve always been a guy who would take every challenge I was presented to. Now I think it’s the right time and I can look back at my career and feel extremely happy about it. Every dig, every reception, every trip, every tournament, won or lost, they were all worth it.” 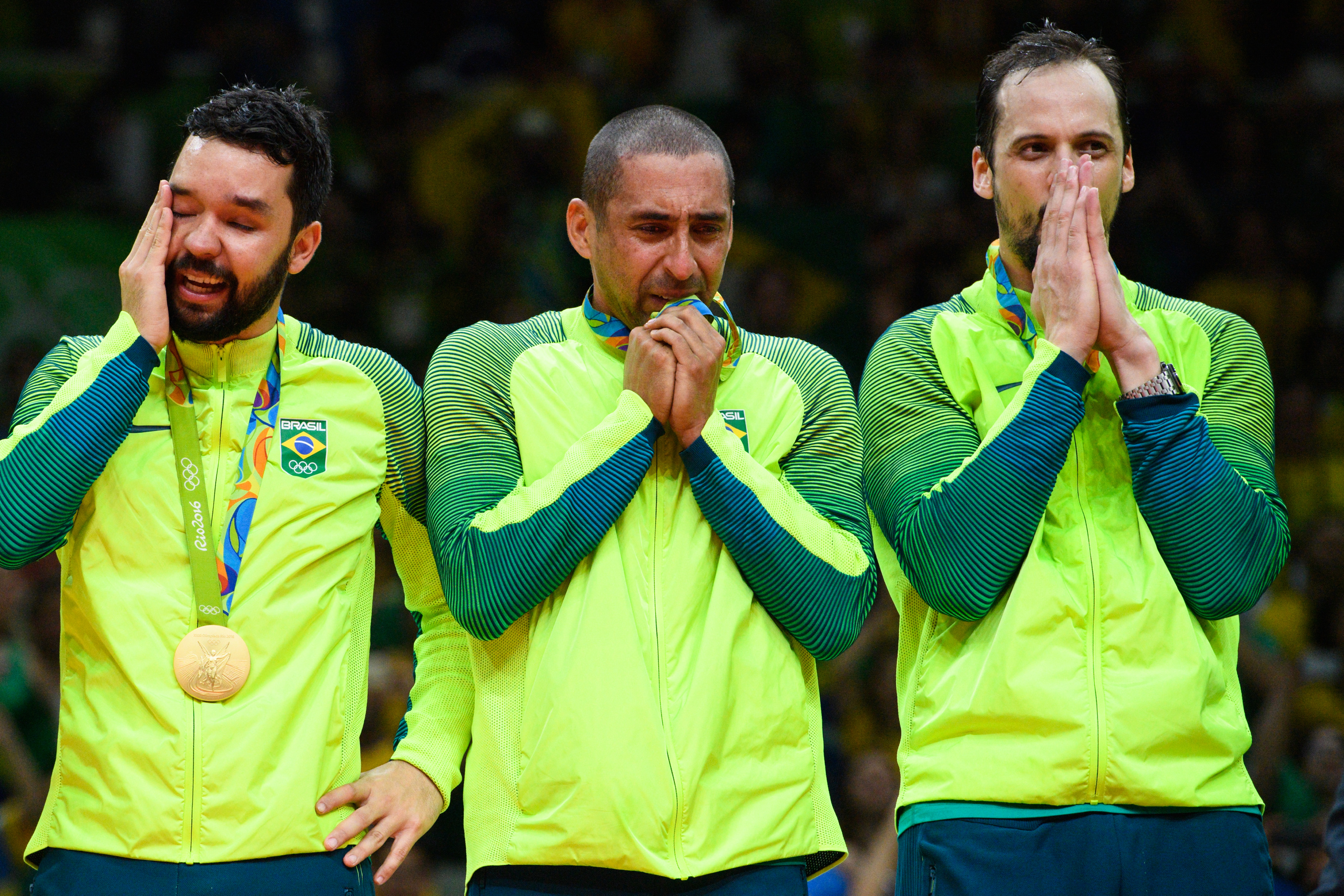 Serginho stands on the Rio 2016 Olympics podium alongside setter William Arjona (left) and Lipe Fonteles (right)
After winning his second Olympic title, Serginho continued playing at club level in Brazil. His last stop was at Pacaembu/Ribeirão Preto, one of the six clubs he played for in his home country. Serginho also had a four-year stint in Italy between 2004 and 2008, when he played for Volley Piacenza. Among his most important results are the 2005-2006 CEV Cup title and the 2007-2008 European Champions League silver medal for Piacenza and the 2010-2011 Superliga victory for Sesi Sao Paulo.
The last member of the Brazilian 2004 team to announce his retirement, Serginho wants to spend time on his farm, where he keeps another of his passions – his horses. The legendary defender, however, aims to keep close ties with volleyball.
“Volleyball is all I know in my entire life,” he added. “So, one way or another, I’m sure the sport will always be a part of my life. If there’s one thing I really don’t want to do, it is to die with all the knowledge I acquired during my career. So I’ll find a way to pass it along, be it by training kids, as a TV commentator or just helping the national team.”
The libero has already started to do that through his Institute Serginho 10, which introduces kids from unprivileged areas of Sao Paulo to the sport and has been operating since April 2019.
The libero’s final message to fans and those who sent him thousands of messages following his retirement announcement summed up the passion for the sport he always showed on the courts.
“If anyone wants to remember my career and honour it, just go to a court and play volleyball.”
More volleyball from Brazil:
Gabi: "My big dream is an Olympic medal"
Alan picks Poland, USA and Russia as Brazil's top opponents
Player of the Week: Gabi Guimaraes
Dani Lins targets national team return
Bruno returns home to play for Taubate
Same goal but new plan for Brazil
Weber departs from Club Bolivar to coach Taubate
Quick links:
FIVB.com - Volleyball
Facebook
Twitter
Instagram
Youtube
This website uses cookies to ensure you get the best experience on our website. For more information please read our Cookies Policy.
Ok