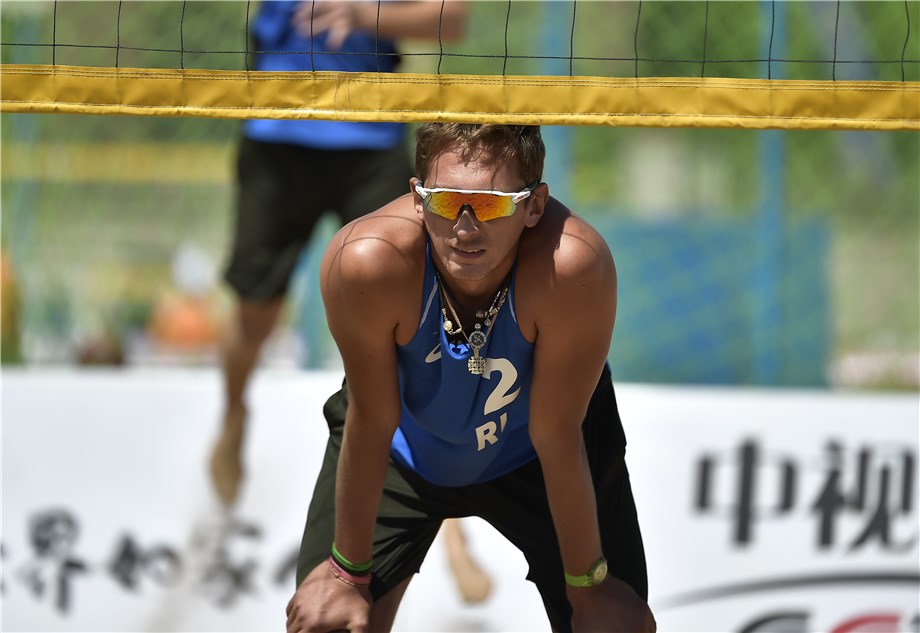 Haiyang, China, September 18, 2019 - It was not Copacabana Beach here Wednesday afternoon, but three players who competed for the bronze medals at the Rio 2016 Olympic Games were in action on centre court competing in the final men's match of the day at the FIVB Tokyo Beach Volleyball Olympic Qualification tournament.

And for the second time since the meeting in Rio on August 18, 2016, Konstantin Semenov and his new partner Ilya Leshukov of Russia posted a win over Alexander Brouwer and Robert Meeuwsen by defeating the Dutch pair 2-0 (21-18, 21-18) in 31 minutes to win Pool C.
"Yes, it is satisfying to defeat them," said the 30-year-old Semenov, who was paired with Viacheslav Krasilnikov in Rio where the Russians dropped a 2-0 (23-21, 22-20) Olympic bronze medal decision to Brouwer and Meeuwsen in 44 minutes. "But in Rio, the loss to the Italians hurt the most in the semifinals."
In the Rio semifinal, Italy’s Daniele Lupo/Paolo Nicolai defeated Semenov and Krasilnikov 2-1 (15-21, 21-16, 15-13) in 52 minutes to advance to the Olympic gold medal match where the Europeans dropped a two-set decision to Alison Cerutti and Bruno Oscar Schmidt of Brazil.

Semenov has met the Italians once on the FIVB World Tour since Rio as he and Leshukov defeated Lupo and Nicolai two weeks ago in Rome at the international circuit's 2018-2019 season finale. Lupo and Nicolai are also competing this week and finished second in Pool A by losing to Mirco Gerson/Adrian Heidrich of Switzerland 2-0 (21-18, 21-16) in the 32-minute group finale.
"Although I don't forget those moments in Rio, I am focused this week on gaining a second berth in Tokyo with Ilya for Russia after Krasilnikov and Oleg Stoyanovskiy earned their spot for the Olympics by winning the FIVB World Championships in July," said Semenov. "This is a tough tournament with a lot of good teams like the Dutch and Italians. Hopefully, we can reach the finals with an opportunity to qualify for Tokyo."
Quick links - Beach volleyball:
Tokyo Beach Volleyball Qualification - Haiyang
Facebook
Twitter
Instagram
Joining the Russians and Swiss in winning groups Wednesday were Adrian Gavira/Pablo Herrera of Spain (Pool B) and Ondrej Perusic/David Schweiner of the Czech Republic (Pool D). Gavira and Herrera are seeking their third-straight trip to the Olympic together. Herrera is also bidding for his fifth Olympic berth after capturing the silver medal at the Athens 2004 Summer Games with Javier Bosma.
Other teams advancing to Thursday's schedule along with the Dutch and Italians are Andre Loyola/George Wanderley of Brazil, Robin Seidl/Philipp Waller of Austria, Mathias Berntsen/Hendrik Mol of Norway, Martins Plavins/Edgars Tocs of Latvia, Piotr Kantor/Bartosz Losiak of Poland and the Grimalt cousins (Esteban and Marco) of Chile.
After Wednesday's competition featured a modified pool play format, Thursday's group action will be a round-robin affair. The top two teams in each group on Thursday advance to Friday's schedule where two pools of four teams each will also play a round-round schedule.
The FIVB Tokyo Beach Volleyball Qualification tournament concludes Saturday for men as the two pairs from each group from Friday's pool play schedule compete for two berths in the Tokyo 2020 Summer Games.