Vilnius, Lithuania, September 12, 2020 - Francisca Rivas and Chris Vorpahl became the first women's team from their country to advance to a semifinal of an FIVB Beach Volleyball World Tour event as the Chileans posted a quarterfinal win here Saturday in the first-ever FIVB-sanctioned event hosted by Lithuania.

Vilnius, Lithuania, September 12, 2020 - Francisca Rivas and Chris Vorpahl became the first women's team from their country to advance to a semifinal of an FIVB Beach Volleyball World Tour event as the Chileans posted a quarterfinal win here Saturday in the first-ever FIVB-sanctioned event hosted by Lithuania.
Quick links:
FIVB Beach Volleyball World Tour - Vilnius 1-star
FIVB Beach Volleyball World Tour
Olympic Games Tokyo 2020
Facebook
Twitter
Instagram
Youtube
Seeded fourth in the competition and competing in their first-ever international event together, Rivas and Vorpahl posted a 2-0 (22-20 and 21-16) quarterfinal win in 38 minutes over seventh-seeded Heleene Hollas and Liisa Soomets of Estonia. It was the third-straight Vilnius Open win for the Chileans after the pair posted two pool play wins Friday.
With the win, Rivas and Vorpahl will challenge second-seeded Margherita Bianchin and Claudia Scampoli of Italy in the second women's semifinal Sunday with the first match featuring Baltic state rivals as third-seeded Ieva Dumbauskaite and Karole Virbickaite of Lithuania meet ninth-seeded Marta Ozolina and Luize Skrastina of Latvia. 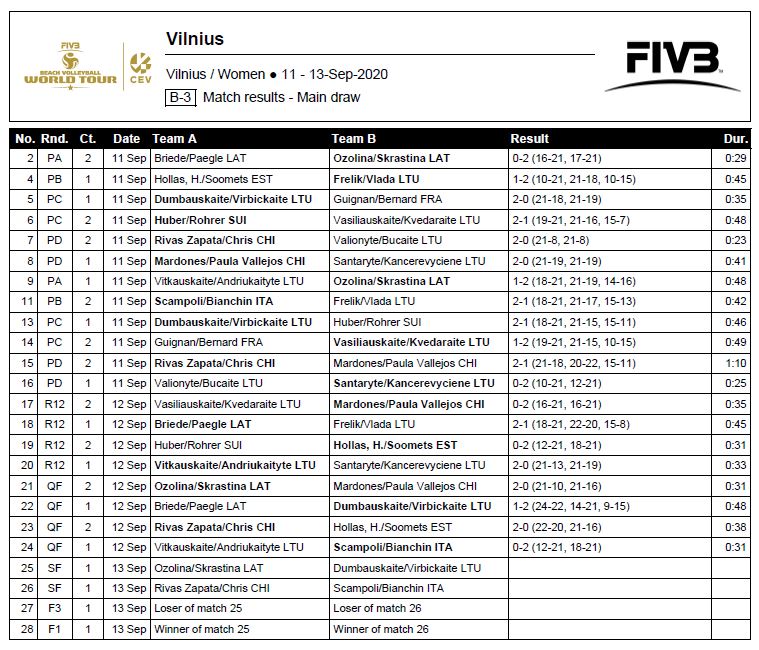 Prior to the Vilnius event, the best finishes for Chilean women on the FIVB World Tour were four ninths with the last being in May 2018 by Rivas and Paula Vallejos at Miguel Pereira, Brazil. Rivas and Pilar Mardones also posted ninths at back-to-back events in 2017 at Chinese-hosted tournaments in Tangshan Jiangning and Nantong. The first Chilean ninth was when the country hosted a World Tour stop in La Serena in 1994 by Carolina Coddou Silva and Lia Karmelic.
All four teams reached the semifinals undefeated as the pairs from Latvia and Lithuania join Rivas and Vorpahl in seeking their country’s first-ever FIVB World Tour women’s gold medal. The Italian women have captured three FIVB World Tour titles with their last being on the same weekend in July 2018 at events in Morocco and Turkey.
Lithuania's best women’s finish on the international circuit was a second by Urte Andriukaityte and Vytene Vitkauskaite in December 2018 at Ljubljana, Slovenia. Alise Lece and Ilze Liepinlauska posted Latvia’s best women’s World Tour placement with a bronze medal at the same Morocco event where Italy won the title.
In the men's semifinals, top-seeded Robert Juchnevic and Artur Vasiljev of Lithuania play fourth-seeded Alberto Di Silvestre and Tobia Marchetto of Italy before an all-Estonian match featuring second-seeded Kusti Nolvak and Mart Tiisaar meeting fifth-seeded Dimitriy Korotkov and Timo Lohmus.
With three of the four teams undefeated in the competition, Korotkov and Lohmus rebounded from a pool place setback to Di Silvestre and Marchetto Friday to post elimination wins over pairs from host Lithuania to reach the semifinals. 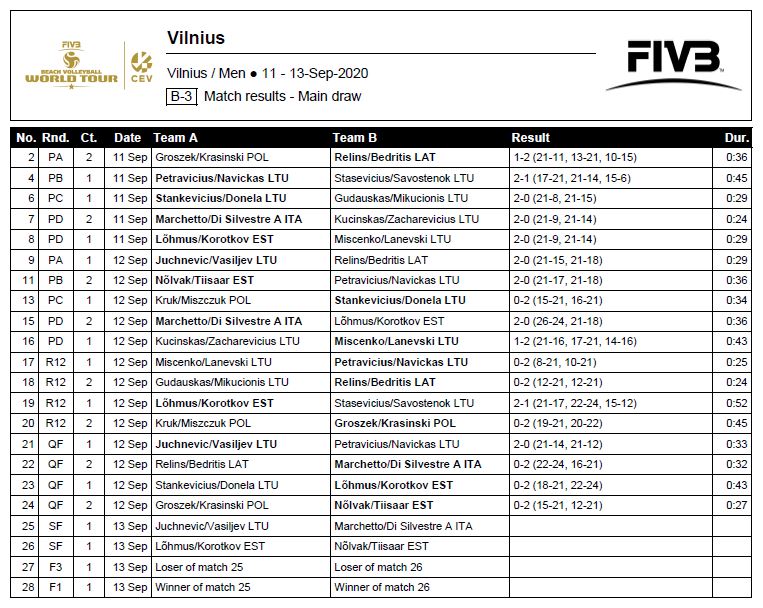 Lithuania will be seeking its first men's World Tour gold medal while Italy has collected 10 titles since the start of FIVB-sanctioned events in February 1987 with the last being in November 2019 by Samuele Cottafava and Jakob Windisch at Tel Aviv. Estonia's only gold medal was achieved in June 2007 by Kristjan Kais and Rivo Vesik at Zagreb, Croatia.
Sunday's winning teams will share the €1,000 first-place prizes as the Vilnius Open marks the fourth men's and third women's event to be staged on the World Tour since the resumption of FIVB-sanctioned beach volleyball events at the end of July.  The World Tour featured 10 men's and six women's events on the 2019-2020 calendar prior to the stoppage in play in mid-March due to the pandemic.
This website uses cookies to ensure you get the best experience on our website. For more information please read our Cookies Policy.
Ok