Itapema, Brazil, May 19, 2019 – April Ross and Alix Klineman captured their third FIVB Beach Volleyball World Tour gold medal together as the Americans topped the podium of the Itapema Open, the Brazilian four-star event held at the Meia Praia Beach, on Sunday.

Itapema, Brazil, May 19, 2019 – April Ross and Alix Klineman captured their third FIVB Beach Volleyball World Tour gold medal together as the Americans topped the podium of the Itapema Open, the Brazilian four-star event held at the Meia Praia Beach, on Sunday.
Ross and Klineman, the fifth-seeded team entering the tournament, ended their Itapema campaign with a hard-fought three-set (25-23, 18-21, 15-10) victory over Canada’s Sarah Pavan/Melissa Humana-Paredes in front of a packed center court. They were flanked in the podium by a pair of Canadian tandems, as Brandie Wilkerson and Heather Bansley secured the bronze medals.
Quick links - Beach volleyball:
FIVB Beach Volleyball World Tour - Itapema
FIVB.com - Beach volleyball
Facebook
Twitter
Instagram
The Itapema Open final was a rematch of the American AVP Huntington Beach gold medal match, just two weeks ago. As in Brazil, Ross and Klineman also needed three sets to prevail over the Canadians, who are their eventual training partners, in California.
“It was very close again,” Ross said afterwards. “I think both teams always try to get better against each other every time we play and, in certain ways, we did get better again. It’s going to be a battle every time and we just feel great that we came out on top one more time.”
Before winning the Itapema Open, the Americans had collected two other World Tour four-star gold medals, in the Hague and Yangzhou, both in 2018. For Klineman, however, the victory in Brazil had a more powerful meaning since it happened in the middle of the Olympic qualification process to the Tokyo 2020 Games and just a few weeks before their first appearance at the FIVB World Championships, in Hamburg, from June 28-July 7.
“Every victory is important, but this counts for more,” Klineman added. “We want to send a message and we want to be consistently the best. This match was very different from the last one in the style of play, it was a tough one. It’s always like this against them and we’re just grateful we managed to come out on top.”
For Pavan and Humana-Paredes, it was their eighth international medal together. They won three golds, four silvers and one bronze so far.
Back-to-back bronzes for Wilkerson and Bansley 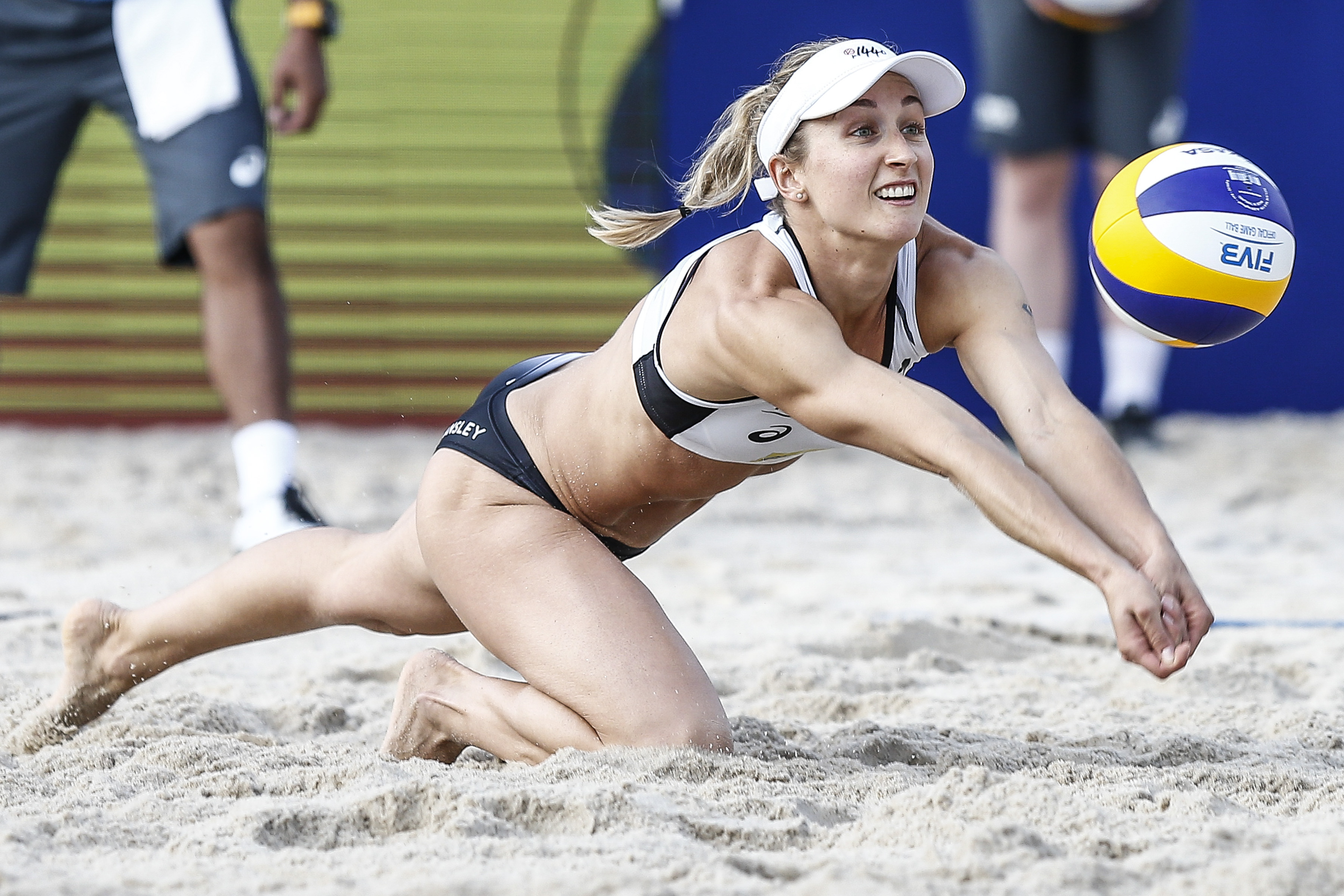 Heather Bansley in action during the bronze medal match
Bansley and Wilkerson returned to a familiar place in Itapema as the Canadians finished third after a three-set (21-19, 17-21, 22-20) battle with the Netherlands’ Marleen van Iersel/Joy Stubbe in the bronze medal match.
The result gave the world ranking leaders their second consecutive bronze medal in Itapema as in 2018 they stepped on the podium for the first time as a team in the Brazilian coastal city, also in third place.
“It feels great,” Bansley commented. “It was a special tournament for us last year, so it holds a special place in our hearts. It’s very nice to be able to repeat that, even if, of course, we wanted more. We’re happy that we came back this morning from a loss yesterday and were able to win against a very good Dutch team which played really well this week.”
It was the seventh medal won by the Canadians in just one year and the third in the 2018-2019 season. They won golds in Warsaw, Las Vegas and Chetumal, silver in Ostrava and bronzes in Itapema and Gstaad.
The fourth-place earned by van Iersel and Stubbe in Itapema is arguably their best result as a team so far. The Dutch started their partnership in 2018 and had reached the semifinals just once in their first 13 tournament, in a three-star event in Lucerne, Switzerland, last year.
The World Tour continues next week with a four-star event in Jinjiang, China, and a one-star tournament in Boracay, the Philippines.
This website uses cookies to ensure you get the best experience on our website. For more information please read our Cookies Policy.
Ok