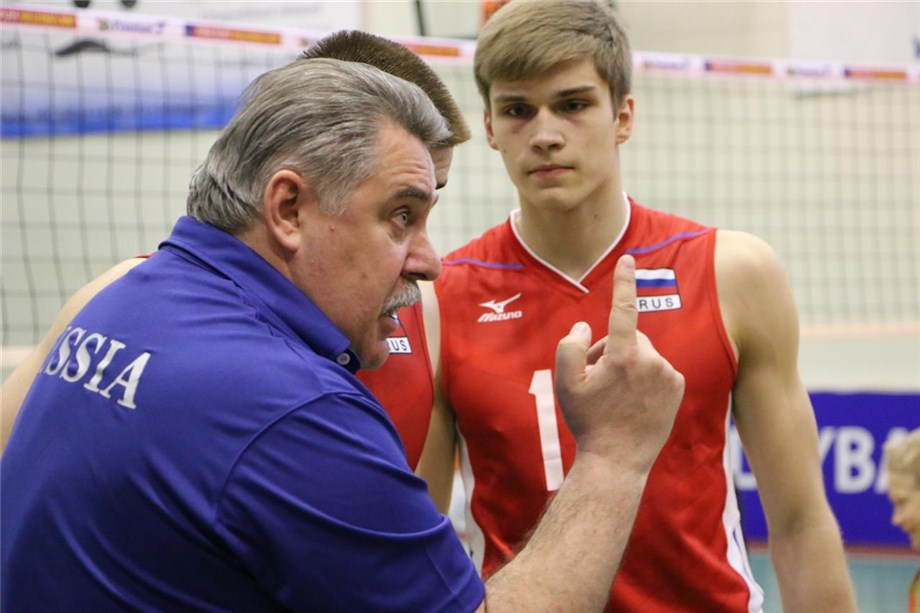 Lausanne, Switzerland, March 17, 2017 – The new head coach of the Russia men's national volleyball team, Sergey Shlyapnikov, has a tough act to follow in Vladimir Alekno, but the 55-year-old has paid his dues and has success with Russia’s age-category teams.
With the youth teams, he has won two World Championships and six European titles and this experience will be invaluable as Russia seeks to rebuild following a disappointing Rio Olympics, where they finished fourth.

“As always, the international calendar is very busy,” Shlyapnikov points out. “I have divided it into three stages. The first is the qualifying competition for the World Championship, which begins on May 22, but bear in mind the national champion will be determined on May 11, so we won’t have much time for even a short rest. As a result, it was decided that the task of getting to the World Championship would lie with our more experienced players. As for the World League, those who worked hard at the Olympic Games will be able to take a break, especially [Sergey] Grankin and [Maxim] Mikhaylov.”
As he balances his squad, Shlyapnikov insists that the team remains focused on trying to win both his “second stage” (the World League) and the “third stage”, the European Championship (August 24-September 3). It’s going to be a busy summer.
“The leadership of the federation have an understanding of the enormous amount of work we have ahead of us in this period,” he says. “In preparing for the European Championship we have a vision of the makeup of the squad that will travel to Poland in late August. For that, we will have all our strongest available players.”
Shlyapnikov has ensured that he has control over age-category teams to allow for a smooth upward progression toward the senior team.
“It was one of the points I made when I was appointed,” he explains. “I wanted assurances that I would have control of the whole range of national teams of different ages. This will allow me to create smoother transitions of talented players from age-category teams to the senior teams.
“With regards to the coaching staff, I have kept them almost entirely intact, from the general manager to the masseurs. I said at one time that we could do everything without any input from foreign specialists, but after talking to Sergio Buzatu and tapping into the wealth of knowledge he has on all the world’s leading players, I came to the conclusion he’s a man we need.”
Shlyapnikov says he is not prepared to put up with players deciding for themselves whether or not they are able to play for their country. “It is important to understand we are talking about the national team and the honour of the country,” he states. “No matter what condition a player is in, he is obliged to respond to a call-up and arrive at the appointed time and place. The coach and the medical staff have to make decisions on players. Even if he is not ready to start a tournament, he should be prepared to go onto the court later and contribute as Reid Priddy did for USA. Priddy almost single-handedly decided the outcome of the bronze-medal match at the Rio Olympics after basically sitting on the bench for two weeks. So the deal is, the player must arrive where the team is and the last word lies with the coach, who, after all, is responsible for the result.”
Although Shlyapnikov has been closely involved with younger players as a coach, he is quick to point out that senior players are vital to his squad and can remain vital as long as they are performing.
“I am fully aware that those with a professional attitude to their work can perform at a high level for many years, even until they are 40,” he states.
For now, he is assessing his players and leaving all doors open as he prepares for an intense summer of competition.