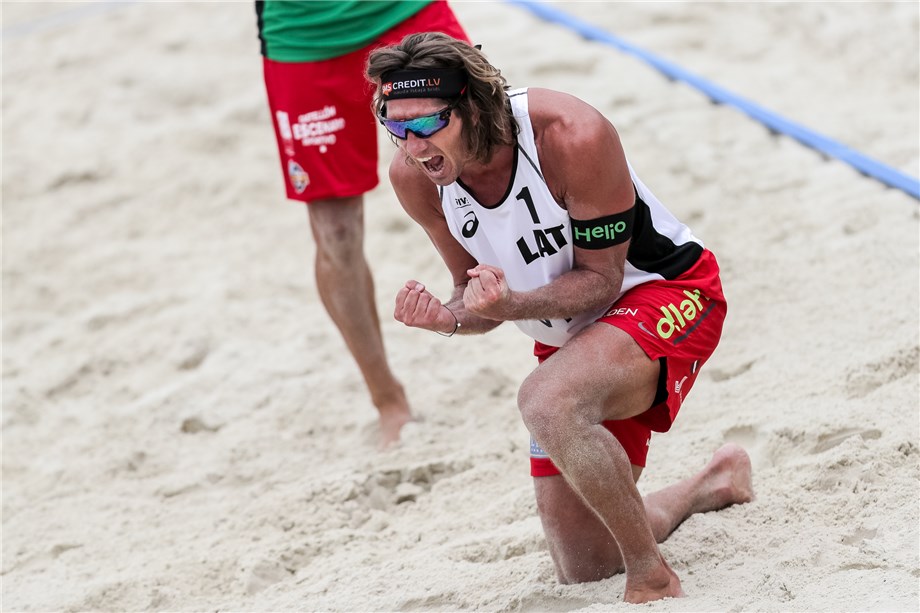 Moscow, Russia, August 16, 2019 – Aleksandrs Samoilovs & Janis Smedins delivered Friday’s biggest upset at the Moscow four-star stop on the 2019 FIVB Beach Volleyball World Tour, knocking the reigning world champions and number one seed in the tournament, Viacheslav Krasilnikov & Oleg Stoyanovskiy, out of the last eight on their home ground in the Russian capital. 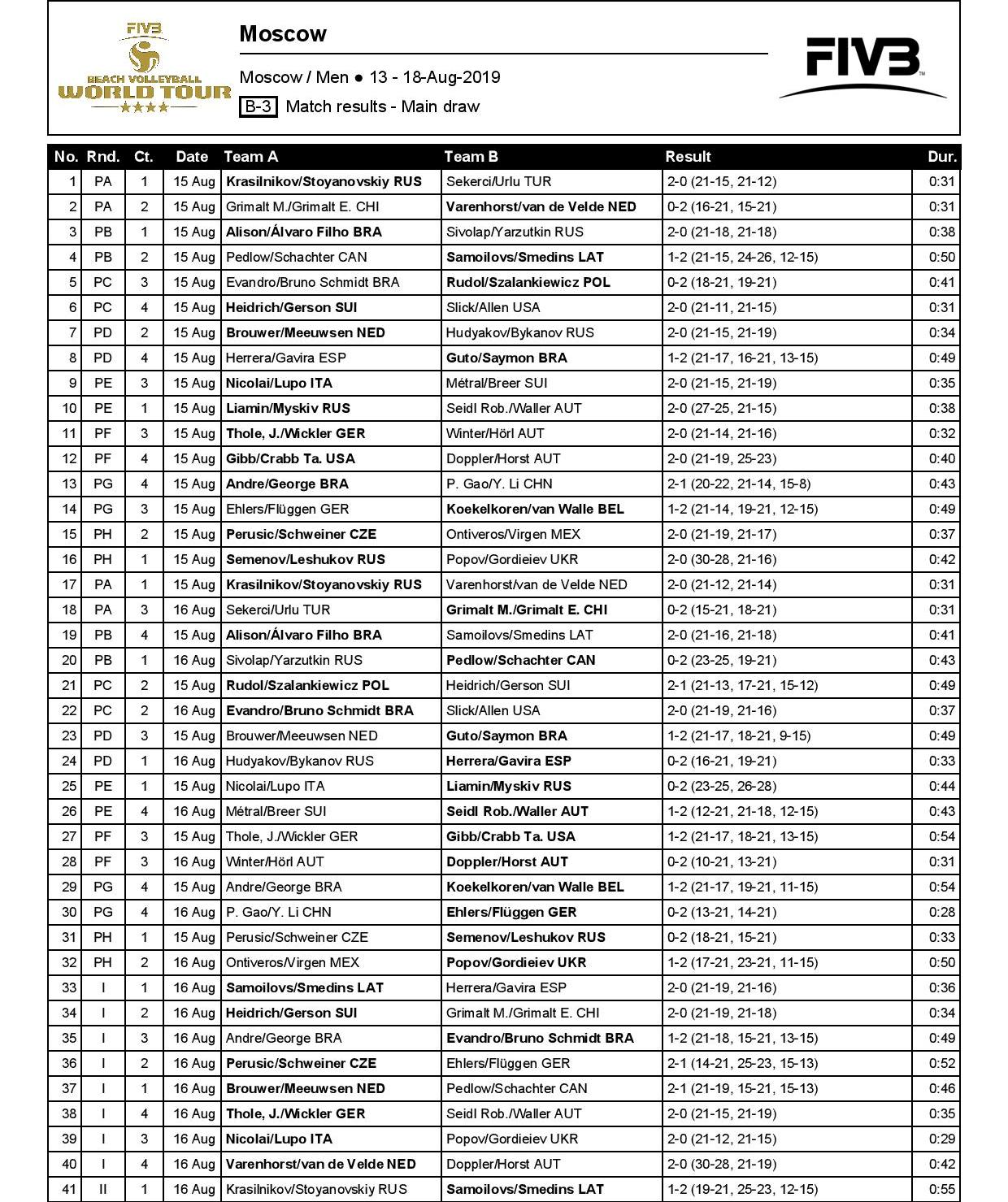 The 18th-seeded Latvians first stormed into the playoff stage with a 2-0 (21-19, 21-16) shutout of Spain’s Pablo Herrera Allepuz & Adrian Gavira Collado (seed #13) to progress to the round of 16. In a spectacular centre court three-setter, Samoilovs & Smedins disappointed the Russian fans with a 2-1 (21-19, 23-25, 15-12) victory over home favourites Krasilnikov & Stoyanovskiy.
“We also felt like we had the home-court advantage, because Moscow is one of the best tournaments for us. We won it last year, we won the Grand Slam six years ago and we have a lot of friends here and a lot of fans as well,” stated Samoilovs upon leaving the court. “Today we just played our best match of the season and I hope we can keep this level over the next two days and over the next tournaments. Our situation with in the Olympic ranking is tough and it’s the right moment to change something and keep going at our best.”
“It feels great to win against the best team of the World Championship and one of the best in the world,” exclaimed Smedins. “Of course, we had to put out our maximum to keep going as equal with them. Today we managed to serve well and put pressure in reception for them and it was working. In the second set, they did the same back on us and that’s why we lost. The game was very tough; it was just power volleyball.” 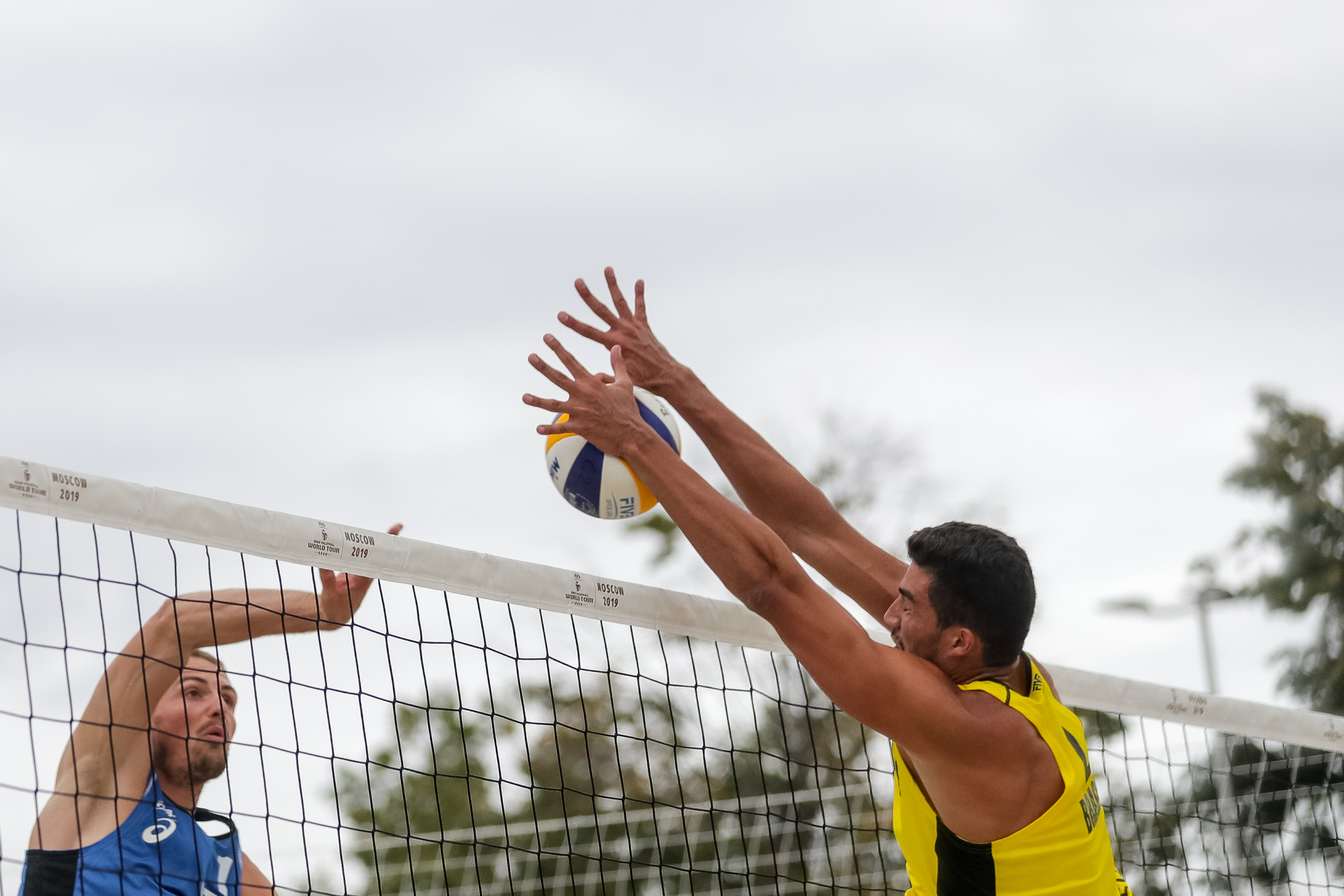 Brazil’s Saymon blocks the spike by Czechia’s Perusic
Qualification wild cards Gustavo Albrecht Carvalhaes & Saymon Barbosa Santos (#20) of Brazil continued their winning streak on the Moscow sand to become the lowest ranked team to advance to the quarterfinals. In the round of 16, they hammered out a 2-0 (21-8, 21-19) shutout of eighth-seeded Czechs Ondrej Perusic & David Schweiner.
Their compatriots Evandro Goncalves Oliveira Junior & Bruno Oscar Schmidt (#3) had to deal with the tough task to win three matches on Friday and they succeeded. The Brazilian standouts managed a 2-0 (21-19, 21-16) victory over USA’s Stafford Slick & William Allen to finish third in Pool C. Then they persevered through three sets against fellow Brazilians Andre Loyola Stein & George Souto Maior Wanderley (#7) to celebrate with a 2-1 (18-21, 21-15, 15-13) comeback win in the first knockout round, and in the eighthfinals, Evandro & Bruno Schmidt brought further disappointment to the home fans by defeating ninth-seeded Russians Konstantin Semenov & Ilya Leshukov 2-0 (21-15, 24-22).
The centre court crowd finally had a reason to celebrate when the third Russian duo, Nikita Liamin & Taras Myskiv (#12), battled their way back from a set down against Switzerland’s Adrian Heidrich & Mirco Gerson to a 2-1 (16-21, 21-19, 15-12) victory in the last match of the day.
“It was a very difficult match. In the first set we did not succeed because we could not cope with the reception, but we were able to turn the tide of the game,” said Myskiv. “The skyball serve, which I trained for a long time at the club, about four months, helped a lot. Tomorrow we will have an even more difficult match against the Latvians who knocked out our guys from the tournament today.  We will try, we will work…”
The remaining four of the top six seeds in the main draw, Brazil's Alison Cerutti & Alvaro Morais Filho (#2), Netherlands' Alexander Brouwer & Robert Meeuwsen (#4), Italy's Paolo Nicolai & Daniele Lupo (#5) and Germany's Julius Thole & Clemens Wickler (#6), met the expectations and also qualified for the men's quarterfinals, with a particularly interesting victory for Nicolai & Lupo, a hard-fought 2-1 (19-21, 21-19, 16-14) comeback against American standouts Jacob Gibb & Taylor Crabb.
Saturday’s semifinals and Sunday’s medal matches at the Moscow four-star will be streamed live on the FIVB YouTube channel.
Quick links - Beach volleyball:
FIVB Beach Volleyball World Tour - Moscow
Facebook
Twitter
Instagram