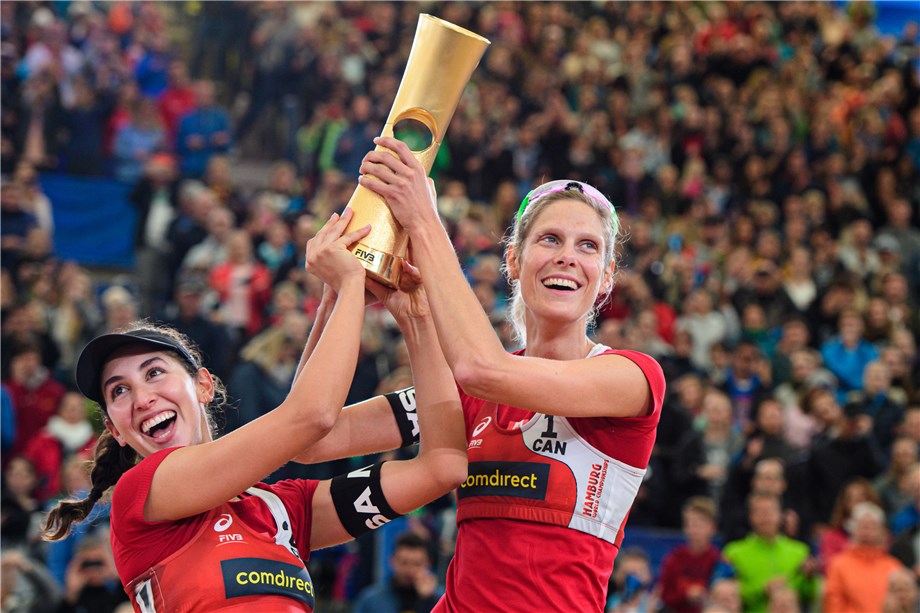 Lausanne, Switzerland, March 29, 2020 - In the third article of a series on world champions Sarah Pavan, Melissa Humana-Parades and their coach Scott Davenport we catch up with the team's blocker.

Sarah Pavan, 33, has been a terrifying opponent to many and almost all of the FIVB Beach Volleyball World Tour since 2013. Awarded best blocker awards on the Tour by her peers on three separate occasions in 2015, 2017 and 2019, she was still combining her indoor and beach volleyball careers until 2018.

The indoor format of the sport is something that Pavan ‘still misses’, having called time on a career that saw her play in Italy, Brazil, China and Korea to focus on beach.


Like the rest of the volleyball world, Canada's athletes were waiting to hear if the Olympic Games in Tokyo would go ahead as planned. It has been a time that Pavan has described as a ‘whirlwind’ as the Olympics were postponed until 2021.

“The last couple of days have been a whirlwind of emotions. I moved from despair at the potential of not being sent to Tokyo, to hopeful at the possibility of a postponement, and now to relief. I am so happy that Melissa and I will have the chance to fight for the gold medal we have been working our whole lives for, and that the Olympics will be celebrated in the way that they are meant to be celebrated - as a united global community”.


It is a feeling of relief for Pavan, who is looking to compete in her second Games after competing at Rio 2016 and finishing fifth with former partner Heather Bansley.

She says that 2019 was a dream season for her and her team and suggests the secret to their success is the fact that they nurtured their relationship just as much as they worked to develop their volleyball skills. Their philosophy of looking at the bigger picture also seems to have had a massive impact on their success in a season when they created history in becoming the first team ever from Canada to become world champions.

“2019 was definitely a dream season. We were able to achieve one of our biggest athletic goals in becoming world champions and made history in the sport in our country. Being able to represent Canada in the AVP as well, and to earn a place on the Manhattan Pier, in addition to winning some other key events along the way made 2019 a year to remember. I think our team really settled into a place of comfort in our relationships and routines, and that made a really big difference for us on the court.”


The team took a silver in Itapema, an event that took place six weeks before the World Championships. In the two tournaments building up to Hamburg, however, they finished only fifth in Warsaw after a defeat to Agatha Bednarczuk and Eduarda 'Duda' Lisboa from Brazil and fell to China’s Chen Xue and Xinxin Wang for a 17th in Ostrava. Pavan admits they weren’t going into the World Championships in top form, but they were focused when push came to shove.

"Honestly, in the lead-up to Hamburg we weren’t playing our best volleyball. Even during group play, we really had to work through some difficulties and grind through some matches. It wasn’t pretty. When it came to crunch time, though, we were dialled in and we executed at a very high level. I think it’s great that we went through that. We had some ups and downs during the tournament, we had our backs against the wall in the semifinal, but we always found a way to fight through it and come out on top. Pulling from that experience in Hamburg will serve us in a big way in future events, especially during the tough moments.”

Sarah and Melissa have achieved seven wins together in a partnership which started officially in 2017 and their victories include some of the biggest titles in the sport. The world champions have also won the Porec Major, Vienna Major, Gstaad Major and the Commonwealth Games and when asked what the secret recipe was down to, Pavan replied: “Our team is very methodical in our preparation for the season, and we design our strength training, mental prep, practice, etc. to try to peak for key events during the year. Periodisation definitely plays a big role in what we do. We are also fierce competitors, though, and we spend a lot of time game planning and being in the moment during competition. There have been events that we have won that our periodisation didn’t necessarily plan for, and that is because of our confidence, prep, and fighting spirit.”

Things are very competitive in women’s beach volleyball at the moment with numerous different teams winning a gold medal on the World Tour in 2019 and in Pavan’s opinion the sport is better than it has ever been.

“I started playing beach in 2013, and I am in awe at how much more physical and talented the pool of teams has gotten in such a short time. There used to be six to eight teams that were always battling in the semifinals, but now that number has grown to at least 15. It is great to see how far the game has come and how much more creative teams are getting. I would say that women’s beach volleyball is definitely in the best place it has ever been, but it is still getting better.”

And when asked about the team's potential favourites tag for the Games when they take place, it made for a difficult question to answer.

“I would say that we are definitely in the discussion for medal contenders. The women’s field has become so strong and so deep in recent years that on any given day at any given event, I really believe that there are 15 teams who could make the semifinals. I believe in our team more than anything, though, and we have an incredible coach and staff that will be behind us the whole way. When we are all together and focused, we can do great things.”

Thank you for following the series and you can read the articles with Melissa Humana-Paredes and Scott Davenport below.