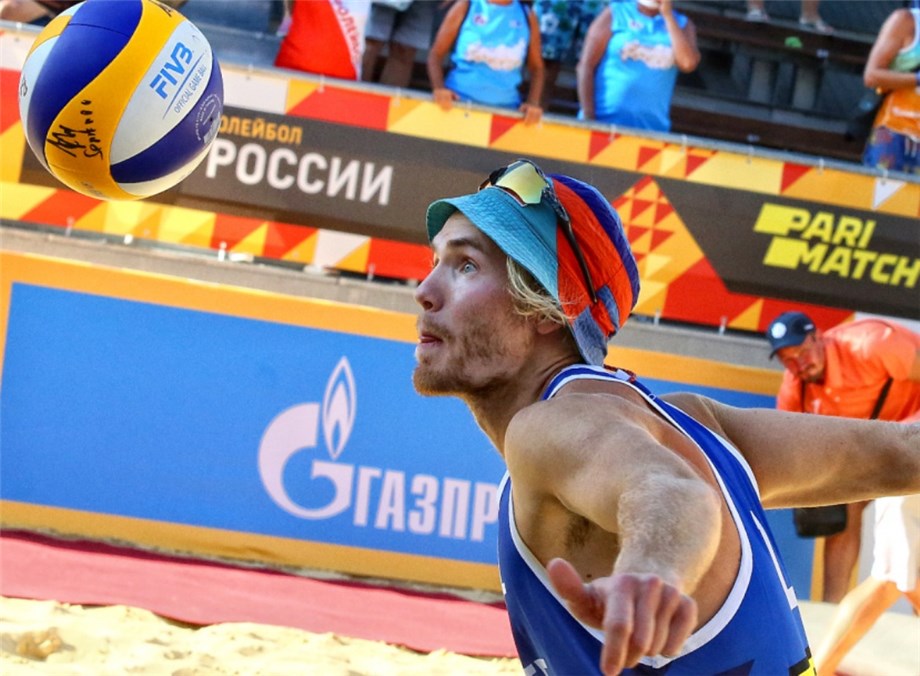 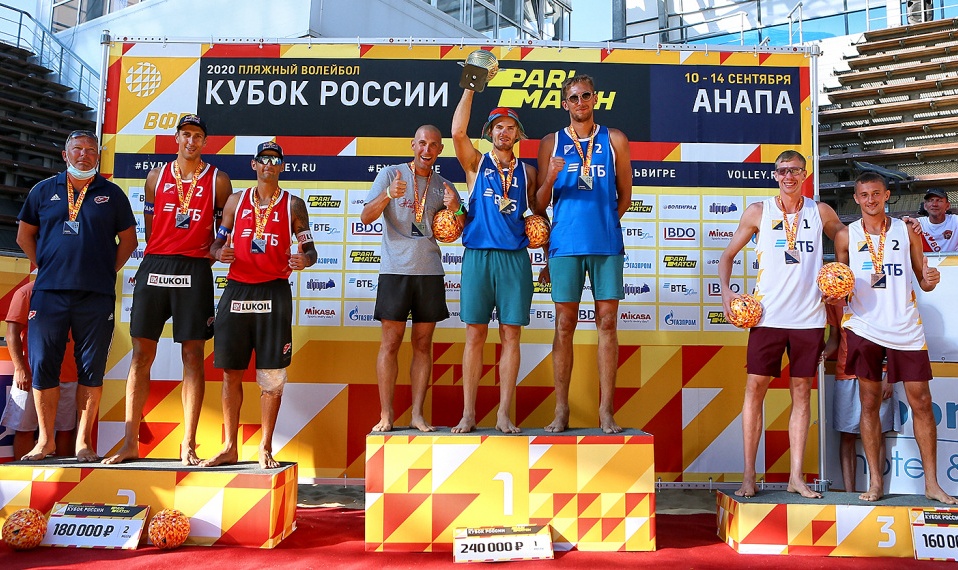 The men’s Russia Cup podium in Anapa
Semenov and Leshukov, silver medallists of the 2019 CEV European Championship and currently #16 in the FIVB World Ranking, took their payback from Krasilnikov and Stoyanovskiy for the defeats in last year’s Russia Cup final and this year’s Russian Championship final in early September.
Both pairs reached the semifinals in Anapa without dropping any sets in five legs played, but had to resort to tie-breaker victories in their battles for the spots in the gold medal match. Semenov and Leshukov of Podmoskovie Moscow Oblast snatched a 2-1 (21-18, 19-21, 15-10) win over clubmates Alexander Likholetov and Ruslan Bykanov, while Krasilnikov and Stoyanovskiy of Fakel Novy Urengoy mastered a 2-1 (15-21, 21-9, 15-11) comeback against Russia’s third highest placed duo in the FIVB World Ranking, Nikita Liamin and Taras Myskiv (#21) of Vityaz Anapa.
In the big final, Semenov and Leshukov claimed a 2-0 (21-17, 21-14) victory over the number two team in the World Ranking to triumph with the trophy. Liamin and Myskiv completed the podium after a 2-0 (21-14, 21-15) win over Likholetov and Bykanov in the third place match. 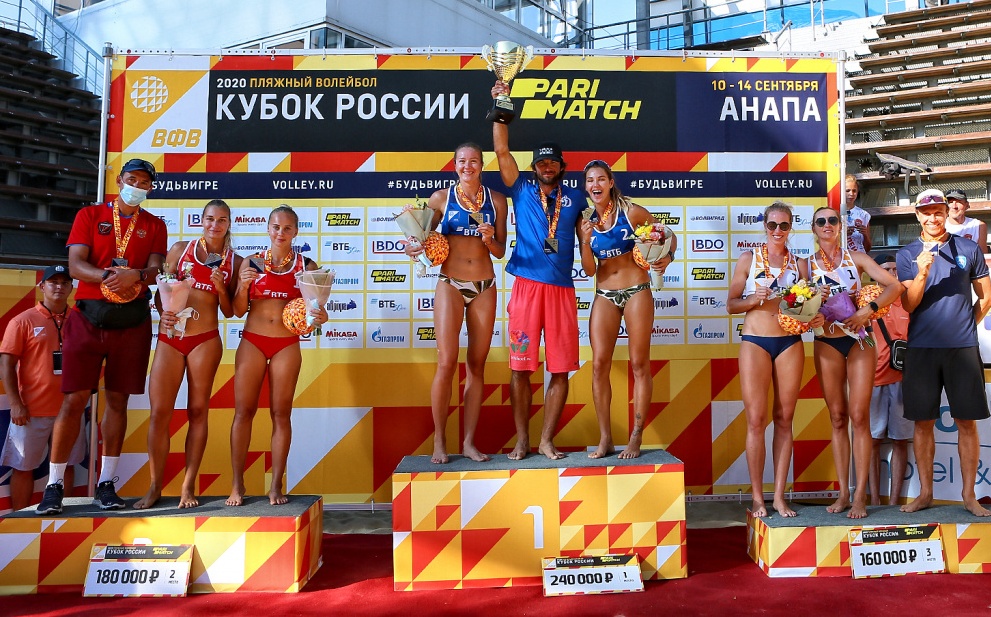 The women’s Russia Cup podium in Anapa
Split along club lines, Nadezda Makroguzova had to face her regular partner in Russia’s highest ranked women’s pair (#21) Svetlana Kholomina in the trophy match in Anapa. The Dinamo Moscow duo of Makroguzova and Rudykh cruised to a 2-0 (21-16, 21-12) shutout of Obninsk’s Svetlana Kholomina and Maria Voronina to top the podium and dethrone last year’s cup winner Voronina, who celebrated the 2019 victory alongside regular teammate Mariia Bocharova.
The only set Makroguzova and Rudykh lost during the tournament was in their exciting semifinal game against Podmoskovie’s Alexandra Moiseeva and Ekaterina Syrtseva (#67 in the World Ranking), which they won by 2-1 (21-23, 26-24, 15-12).
The latter also brought the bronze medal match to a tie-breaker, only to lose to experienced two-time Olympians Evgenia Ukolova and Ekaterina Birlova (#31 in the World Ranking) of Dinamo Moscow, who made the podium on the wings of a 2-1 (19-21, 21-19, 15-7) comeback.
Nadezda Makroguzova and Ilya Leshukov were named Best Players of the women’s and the men’s tournaments respectively.
More beach volleyball from Russia:
Krasilnikov & Stoyanovskiy defend Russian Championship title
Kholomina & Makroguzova get back at Bocharova & Voronina on Russian Tour
Krasilnikov & Stoyanovskiy, Bocharova & Voronina triumph on Russian Tour
Krasilnikov & Stoyanovskiy reunite to win Kazan stop on Russian Tour
Big names on the sand as Russia tour restarts
Ilya Leshukov keen to return to action
Stoyanovskiy on improving and the world's best blockers
Viacheslav Krasilnikov talks about his journey
Krasilnikov: I’ll build a court and teach my neighbours how to play
Stoyanovskiy patiently awaits return to the sand
Quick links:
FIVB Beach Volleyball World Tour
Olympic Games Tokyo 2020
Facebook
Twitter
Instagram
Youtube