Semenov gets the green light to head back to the beach

Lausanne, Switzerland, February 5, 2018 – For some, the transition between beach volleyball and indoor volleyball is relatively smooth and painless. For Konstantin Semenov, it was fine going one way but a problem going the other.

Lausanne, Switzerland, February 5, 2018 – For some, the transition between beach volleyball and indoor volleyball is relatively smooth and painless. For Konstantin Semenov, it was fine going one way but a problem going the other.
The Russian had played in two Olympic Games on the beach and had won two gold medals, three silvers and a couple of bronzes in 74 international events. But beach volleyball requires a lot of travel and time away from home, so despite reaching the Olympic semifinals in Rio 2016, Semenov made the decision to try indoor volleyball once again and spend less time travelling and more with his family.
Nice idea but it didn’t work.
“Moving back to indoor after playing beach was very difficult,” the 210-cm Semenov revealed in an interview with www.beachmajorseries.com. “My back and my knees struggled and I’ve had a lot of injuries because of the hard floor. I didn’t have much of a reputation on indoor and any mistakes I’d make on my limited playing time would cost me a lot.”
Semenov had started out as an indoor player and played for the Russian Youth and Junior National Teams, but the beach came calling in 2009 and he found considerable success. However, the extended time away from his home made life difficult and at the age of 27, he accepted an offer from Gazprom-Ugra to play indoor volleyball. 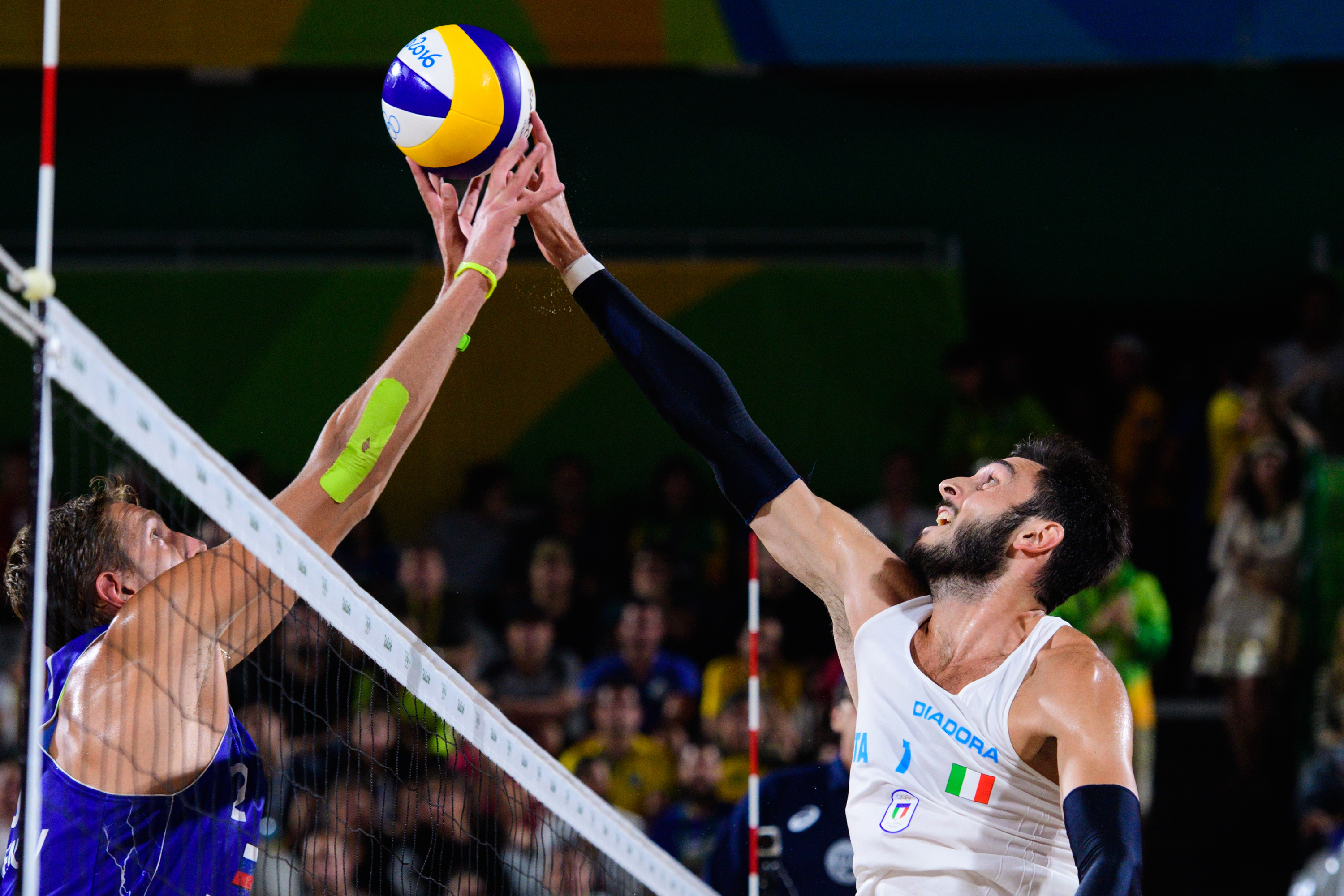 Konstantin Semenov (left) up against Italy's Paolo Nicolai at the Rio 2016 Olympic Games
Being home again was fine, but his return to the hard floor just didn’t work out. He suffered injuries and struggled to find playing time in the competitive Russian league. He tried moving to another club, Belogorie Belgorod, but the problems remained.
If the voices in his head were hinting that he’d made a mistake, the voice in his wife’s head made everything very clear. “I don’t see any fire in your eyes since you have been playing indoor again,” she told him. “You used to be a different person on the court. You have to return to beach volleyball.”
That made his decision to return to the beach easier, but he would still have to readjust to life on the sand and, more importantly, find someone to play with.
He opted to team up with 22-year-old Ilya Leshukov, a silver medalist at the 2014 FIVB Under-21 World Championships, but with Semenov having been away from the World Tour since 2016 and Leshukov registering only eight tournaments in his entire international career, they wouldn’t be starting at the top in a system where rankings are all-important.
“The points are an issue for us now, so we’ll have to play some regional and satellite tournaments, but I hope we can compete in the Major Series at some point this season,” Semenov said.
The 28-year-old is confident in his new partner: “He’s young, but very experienced, and he has big goals, as I do.” That faith was quickly repaid.
A week before Christmas, Semenov made his official return to beach volleyball with Leshukov in the Eastern European Volleyball Association Finals, a tournament held in Moscow with teams from Russia, Latvia, Belarus, Estonia and Ukraine.
The pair romped through the opposition winning the gold medal with five straight wins and no sets dropped.
“It was such an awesome feeling to return and win the Moscow EEVZA,” Semenov recalled. “I had about 10 days to prepare and I got massive support from Russian coach Evgeniy Romashkin. I am so grateful to him.”
To test their strength against the best, Semenov and Leshukov headed to Brazil for training and competition.
“This is how we decided to start our preparation for the season,” says Semenov.

“We are working with famous Brazilian coach Adriano Ticao before competing and it has been great to train with some tough Brazilian teams.” 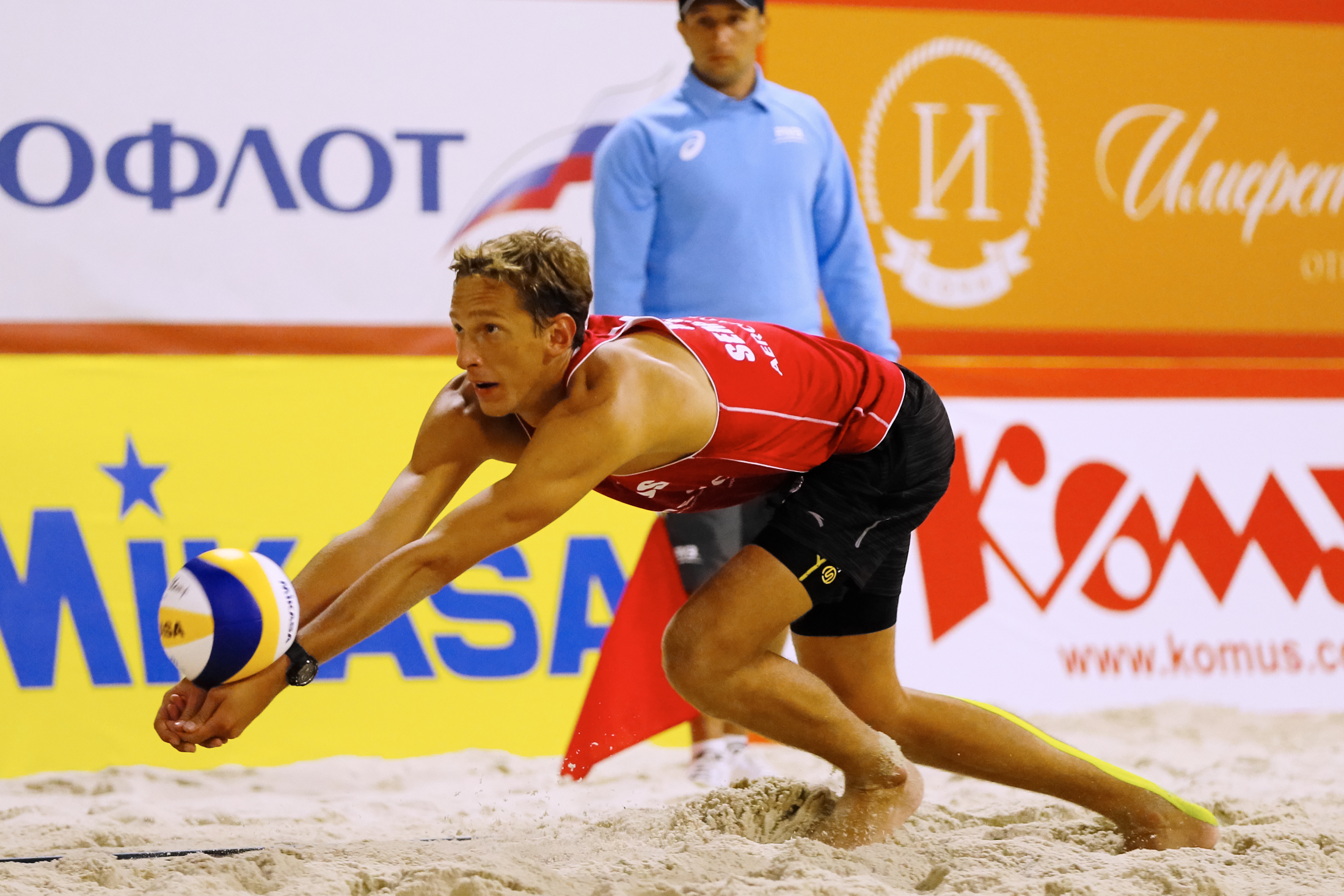 Semenov in action at the 2016 Sochi Open, where he and Viacheslav Krasilnikov won silver.
While they’ve started well, Semenov knows the road to Tokyo 2020 is hardly going to be easy with loads of beach volleyball talent in his home country.
“But I hope my deepest dream of becoming an Olympic champion comes true one day,” he states.