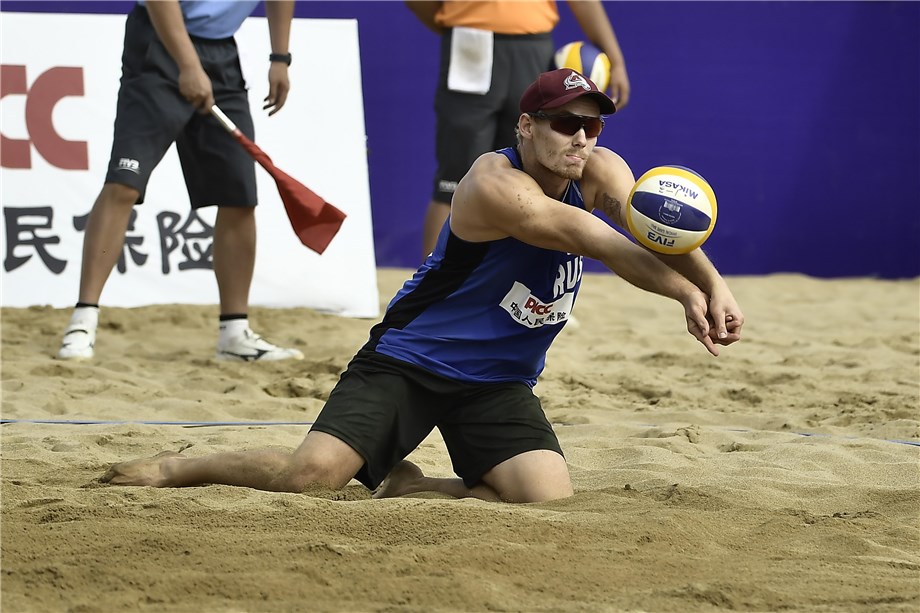 Ilya Leshukov of Russia with a Mikasa reception during his team's match against Poland Saturday morning at the FIVB Tokyo Beach Volleyball Qualification Tournament in Haiyang, China.

Haiyang, China, September 21, 2019 - Teams from Russia and Italy secured the first two spots in the finals of the FIVB Tokyo Beach Volleyball Qualification tournament here Saturday morning.
Quick links - Beach volleyball:
Tokyo Beach Volleyball Qualification - Haiyang
Facebook
Twitter
Instagram
Ilya Leshukov and Konstantin Semenov captured Pool I with a 3-0 match mark as the Russians posted a 2-0 (21-14, 21-17) win in 34 minutes over Piotr Kantor and Bartosz Losiak of Poland.  The Russians, who have now won six of seven matches this week, will play in the first final Saturday at 2 p.m. (local time).
Semenov, a fourth-place finisher at the Rio 2016 Olympic Games with Viacheslav Krasilnikov, and Leshukov defeated the Poles for the third time in four FIVB matches this season.
Despite finishing in a three-way tie for second in Pool I, Daniele Lupo and Paolo Nicolai of Italy advanced from the group by having a better point ratio among the deadlocked teams with a plus-12 advantage.
Mirco Gerson and Adrian Heidrich of Switzerland created the three-way tie in Pool I by posting a 2-0 (26-24, 24-22) victory in 44 minutes over the Italians.  It was the Swiss second win this week over Lupo and Nicolai as the two pairs met Wednesday in an opening match.
Despite the win, Gerson and Heidrich finished fourth in the group with a minus-seven point ratio among the three-tying teams.  Kantor and Losiak, who defeated the Swiss in three sets Friday after losing to the Italians in two sets, had a minus-five point ratio.
In Pool J, Alexander Brouwer/Robert Meeuwsen of the Netherlands leads with a 2-0 record and has secured a spot in the finals.  The Dutch play Mathias Berntsen/Hendrik Mol of Norway in the final group match Saturday morning with a win sending Brouwer and Meeuwsen to the second final at 3 p.m. against Lupo and Nicolai.
The second Pool J berth will be decided between the winner of the match between Martins Plavins/Edgars Tocs of Latvia and Andre Loyola/George Wanderley of Brazil.  A Dutch setback will create a two-way tie in Pool J with either the Latvians or Brazilians.  The deadlock would be broken by point ratio first and head-to-head second as Brouwer and Meeuwsen (1.5-point ratio) defeated both the Latvians (0.9) and Brazilians (1.1) Friday.