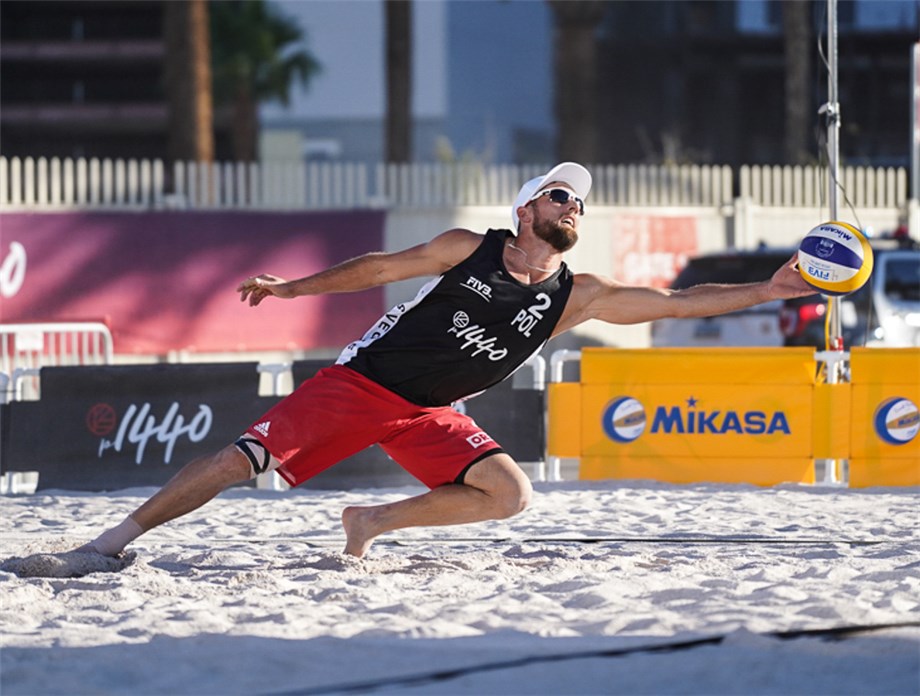 Las Vegas, USA, October 19, 2018 – Eight teams from seven different countries remain alive as the men’s tournament of the FIVB Las Vegas Open presented by p1440 ended its second day at the American resort city on Friday.
After the completion of pool play, Round of 24 and Round of 16, beach volleyball duos of Brazil, Italy, Norway, Poland, Russia, Spain and the United States secured spots into the quarterfinals of the World Tour four-star event in American soil.

The Polish tandem of Grzegorz Fijalek and Michal Bryl is one of the quarterfinalists. The Europeans, who finished second in the World Tour Finals in August and had not played since then, are off to a great start in Las Vegas, winning all of their first three matches without dropping any sets.
The team, which topped Pool D, advanced to the quarterfinals with a comfortable two-set (21-13, 21-11) victory over Italians Marco Caminati and Enrico Rossi.
“We’re very happy about our start as it’s not easy to get back to a good level after a break like the one we had,” Fijalek said. “We’re trying to concentrate on our side of the court and one thing we knew we had to do well was serving because it’s a little bit windy here. I hope we can continue playing well until the end of the tournament.”
The Polish will face another Italian team in the quarterfinals, the one of Rio 2016 Olympic silver medalists Daniele Lupo and Paolo Nicolai, who took Qataris Cherif Samba and Ahmed Tijan down in two sets (21-18, 21-17). 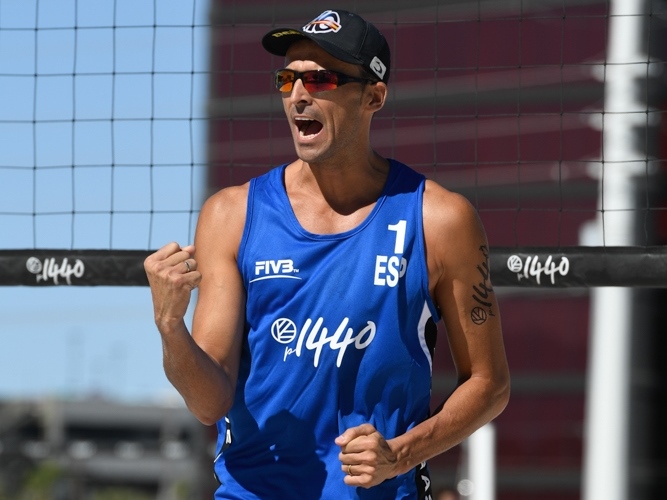 Spanish veteran Pablo Herrera celebrates a point in the victory against the Brazilians
Spaniards Pablo Herrera and Adrian Gavira had a tougher route to the quarterfinals as the European had to go through a pair of three-setters to secure their places among the best eight team s of the tournament.
In the Round of 24, the veterans defeated Chilean cousins Marco and Esteban Grimalt 21-18, 19-21, 15-11. Later, they took down Brazilians Pedro Solberg and Bruno Schmidt 21-17, 18-21, 15-13 in the Round of 16.
“We managed to keep the focus the entire time despite of some struggles,” Gavira explained. “They planned really well and Bruno made an amazing dig in the final point, but fortunately Pablo was there too and we scored the point we needed to win. It’s the last tournament of the year for us and we’re happy we advanced, but we want more.”
The Spanish will now face Americans Tri Bourne and Trevor Crabb, who qualified after a hard-fought three-set (19-21, 23-21, 15-9) battle against Germans Phillipp Bergmann and Yannick Harms. The teams played each other on Thursday and the Americans came out on top.
Americans Jake Gibb and Taylor Crabb, who posted a 2-1 (21-18, 12-21, 15-13) victory over Czech Republic’s Ondrej Perusic and David Schweiner, and Russians Oleg Stoyanovskiy and Viacheslav Krasilnikov, who also needed all three sets (21-13, 17-21, 15-13) to eliminate Brazilians Saymon Barbosa and Guto Carvalhaes, will meet in another quarterfinal game.
The final semifinal spot will be in dispute between Brazilians Ricardo Santos and Alvaro Filho, who posted a 21-15, 13-21, 15-9 victory over the Netherlands’ Alexander Brouwer and Robert Meeuwsen, and Norway’s Anders Mol and Christian Sørum, who took down Latvians Martins Plavins and Edgars Tocs in straight sets (21-18, 21-14).
Quarterfinals and semifinals of the men’s tournament in Las Vegas will be played on Saturday while the gold and bronze medal matches are scheduled for Sunday.
Quick links - Beach volleyball:FIVB Beach Volleyball World Tour - Las VegasFIVB.com - Beach volleyballLatest VideosFacebookTwitterInstagram