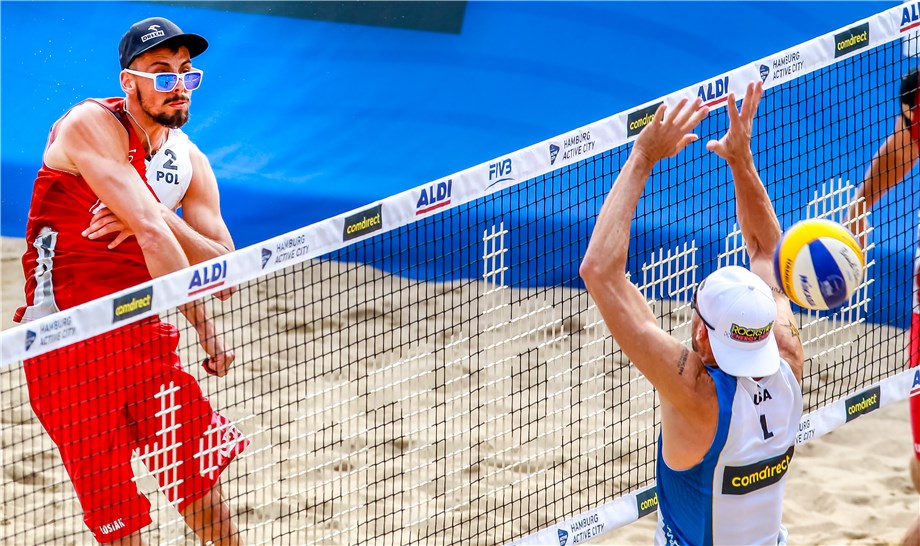 Bartosz Losiak (left) of Poland hits the Mikasa past Jake Gibb of the United States as the Polish star is returning to international beach volleyball competition after missing a month due to a foot injury.

Hamburg, Germany, July 4, 2019 - A field of 38 countries is now down to 17 nations in contention for World Championship gold and a ticket to the Tokyo 2020 Olympic Games as the $1-million FIVB Beach Volleyball World Championships presented by comdirect and ALDI Nord continue here Thursday at Am Rothenbaum Stadium.
Quick links - Beach volleyball:
FIVB Beach Volleyball World Championships Hamburg 2019
FIVB.com - Beach volleyball
Facebook
Twitter
Instagram
Sixteen (16) women's teams from 10 nations and 32 men's pairs from 17 countries remain in the competition as Thursday's schedule features the eight women's and 16 men's elimination matches. The 12th edition of the FIVB World Championships concludes Saturday for women and Sunday for men.
With nine men's and seven women's pairs ranked in the top-10 on the FIVB World Tour remaining in the competition, Wednesday's featured men's match of top-ranked tandems will be a meeting between No. 8 Ilya Leshukov/Konstantin Semenov of Russia and No. 9 Piotr Kantor/Bartosz Losiak of Poland at 5 p.m. (local time) on a Rothenbaum Stadium side court. 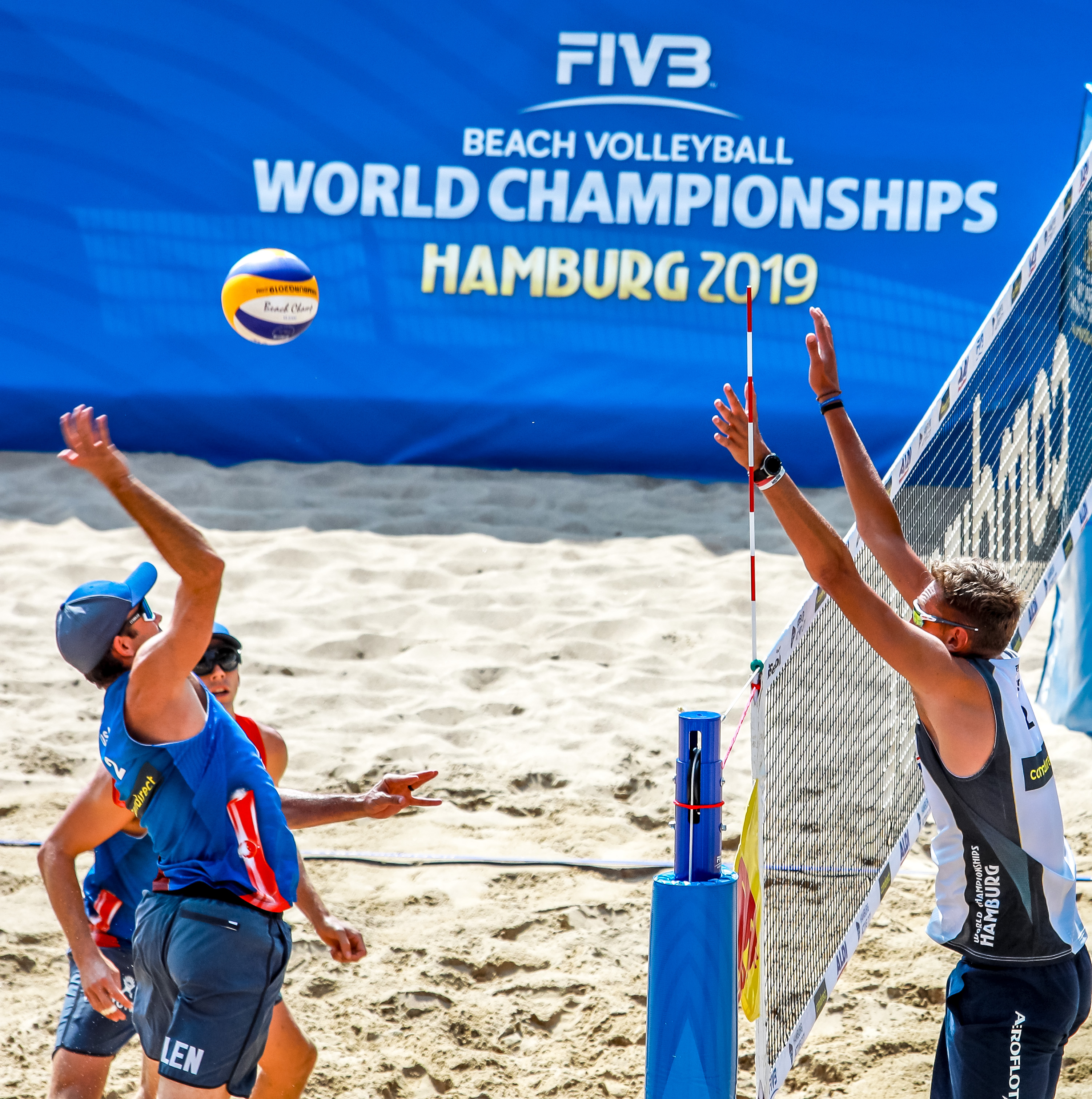 Konstantin Semenov (left) of Russia blocking earlier in the World Championships against Bill Allen of the United States
It will be the second FIVB World Tour meeting between the two teams as Leshukov and Semenov defeated the Polish pair in the quarterfinals at The Hague where the Russians finished third at the first international beach volleyball event of the 2019 calendar year.
Losiak is returning to action at the FIVB World Championships after being sidelined for a month with a foot injury. While the Russians are competing in their first-ever World Championships together, Kantor and Losiak were at the 2017 Vienna Worlds.
The women's spotlighted match will feature No. 6 Melissa Humana-Paredes/Sarah Pavan of Canada meeting No. 10- Sanne Keizer/Madelein Meppelink of the Netherlands at 4 p.m. Wednesday on the Rothenbaum centre court. 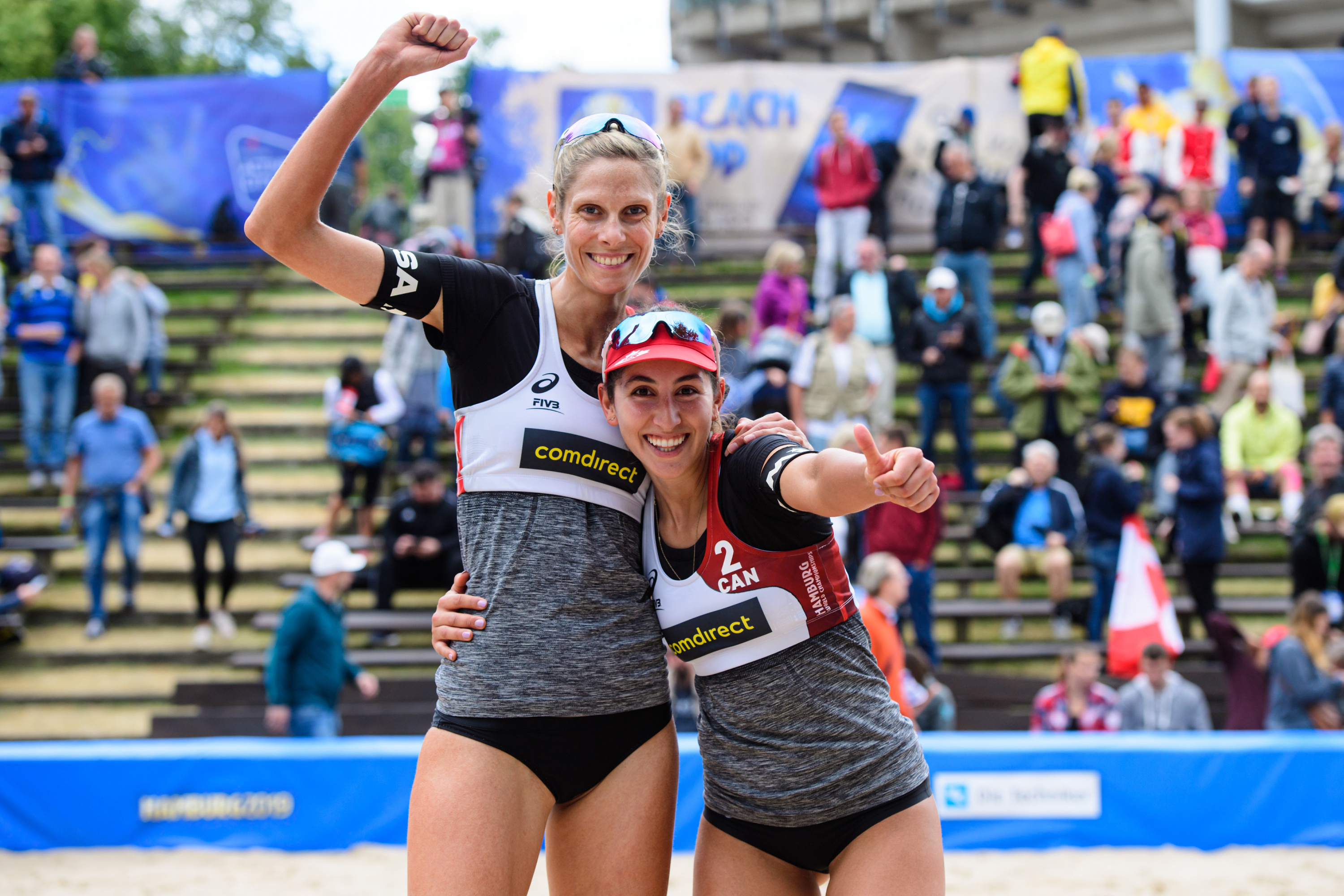 Canadians Sarah Pavan (left) and Melissa Humana-Paredes
The two teams have met twice before on the FIVB World Tour with Keizer and Meppelink defeating the Canadians last August in pool play at the Vienna Majors with Humana-Paredes and Pavan prevailing three weeks ago in an elimination match at the Warsaw Open.
Humana-Paredes and Pavan finished fourth at the 2017 Vienna World Championships as Germany, the United States and Brazil placed 1-2-3, respectively. Keizer and Meppelink are the reigning European champions.
The women's quarter- and semifinal matches will be played on Friday followed by the medal matches Saturday on the Rothenbaum Stadium center court. The men's round of 16 matches will be Friday, the quarters and semis on Saturday and the podium placing contests on Sunday. In addition to the $60,000 first-place prize, the winning teams will net a berth in the Tokyo 2020 Olympics for their country. 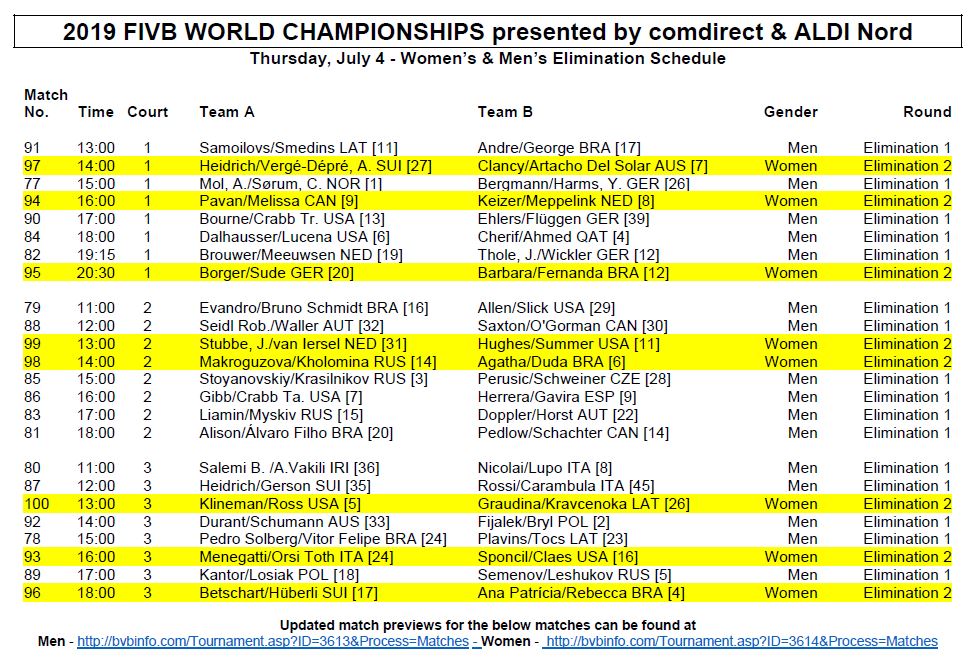