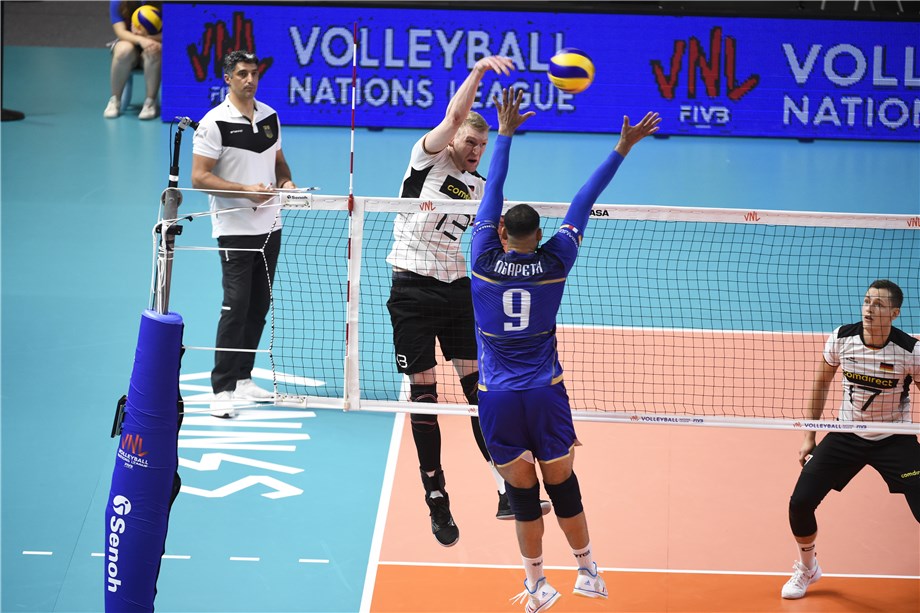 Lausanne, Switzerland, June 15, 2019 – Despite only winning two of their matches so far, Germany are hoping they will be able to pick up some valuable points and experience as the 2019 FIVB Volleyball Nations League nears its business end and opposite striker Simon Hirsch believes his team has the quality to compete against the world’s best.
In the inaugural 2018 edition, Germany won seven of their 15 matches and finished ninth in the standings. They currently rank fourteenth in this year's edition.
“All in all, we can be happy with the 2018 result. We wanted to reach the finals and we were quite close,” Simon Hirsch told fivb.com in the build-up to the 2019 competition. “We learned that we can win against big teams, but also lose against smaller teams, if we do not play at 100 per cent. We want to do better this year.”
The highlights of Germany’s participation in the 2018 VNL, according to Hirsch, were the victories over Poland and USA. “We enjoyed winning against such strong opponents a lot.” 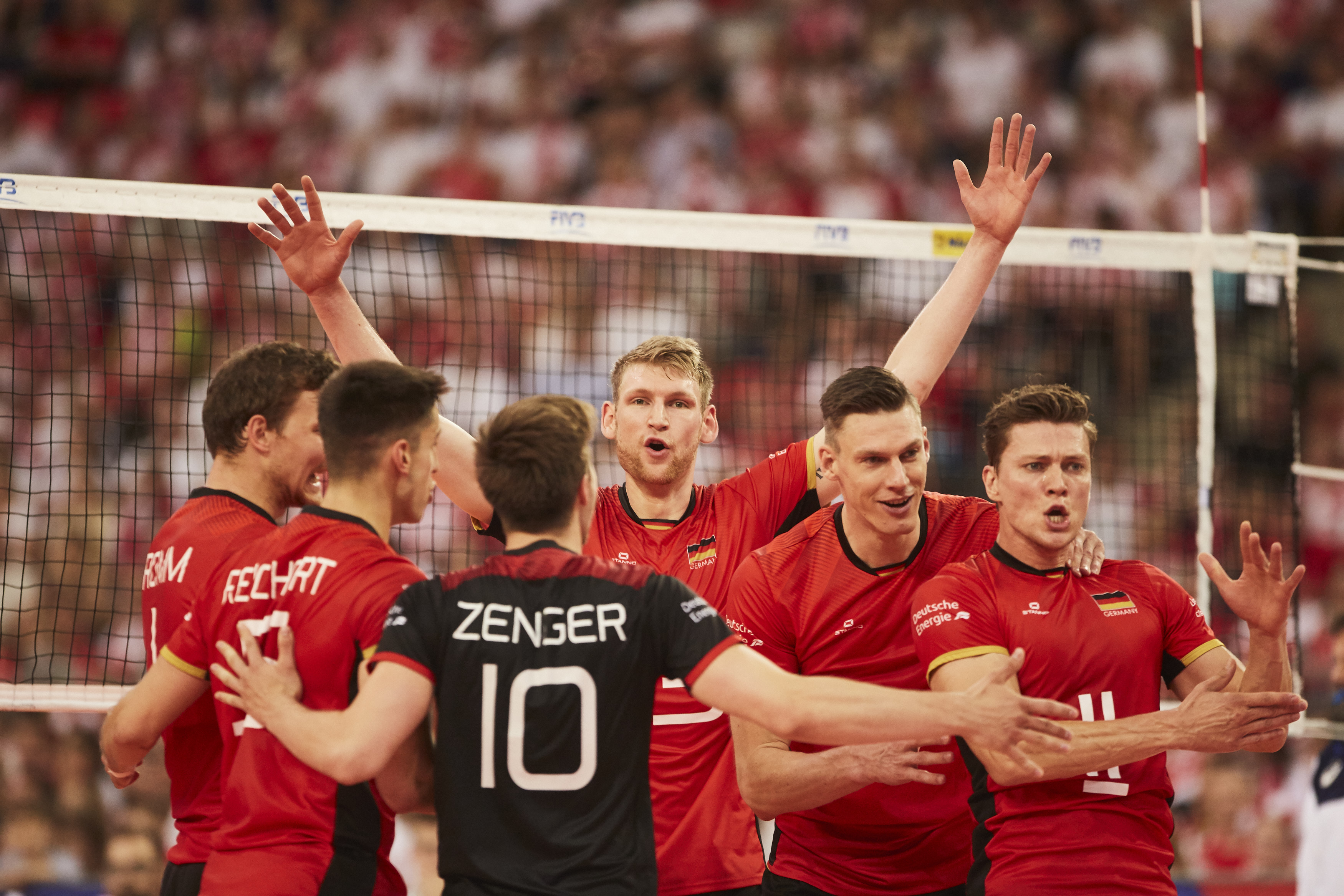 Simon Hirsch was Germany’s best scorer in the superb VNL win over world champs Poland in Poland in 2018
With 183 points to his name, Hirsch was Germany’s most prolific player and the sixth best scorer overall of the VNL preliminary round in 2018, but he modestly shrugs it off as a “lucky” achievement. “It is nice to hear about it afterwards, but I’m a team player and just want to win. I would be as happy if I score 5 or 35 points for the victory,” he pointed out. In 2019, he is again his team's leading scorer, currently on a total of 99 points as Germany prepare to take on USA on Saturday.
Hirsch prefers to look into the future rather than talk about the past. “It will be nice to see what we can accomplish," he said. "We need to show we can play with the best and we can be one of the best. We will try to achieve as many wins as possible. Without a doubt, we will try to reach the finals and, yes, I think we have the quality to do so.”
Germany will host a men's VNL tournament in Leipzig from June 28 to 30, entertaining Japan, Poland and Portugal, and the 2.04m-tall volleyballer looks forward to it. “It is always nice to play in your country. The atmosphere in Ludwigsburg last year was amazing. With all the travelling, it’s good to come home and eat some good German food,” Hirsch said laughing.
The latter obviously applies to travelling not only for volleyball, but also for holidays. Hirsch plans a road trip to Spain and Portugal after the VNL this summer. After last year’s VNL, he enjoyed a road trip to Belgium, the Netherlands and France. “I like to travel and experience other cultures. But most of the time I was with my friends in Berlin and enjoyed doing nothing,” he admitted with a smile.
Germany are silver medallists from the most recent European Championship and Hirsch is also excited about this year’s EuroVolley which takes this summer. He even looks further ahead hopeful that Germany will make the 2020 Olympics, a “big chance to bounce back” from missing the 2018 World Championship.
The 26-year-old athlete thinks Andrea Giani, who is in charge of the German national squad, is a big asset to the team. “Andrea is an amazing coach, so experienced from playing at high level for over 15 years! He is always very supportive and with a great sense of humour, but can also make sure you listen. He is the perfect mix between a humble guy and a coach, always hungry for volleyball.” 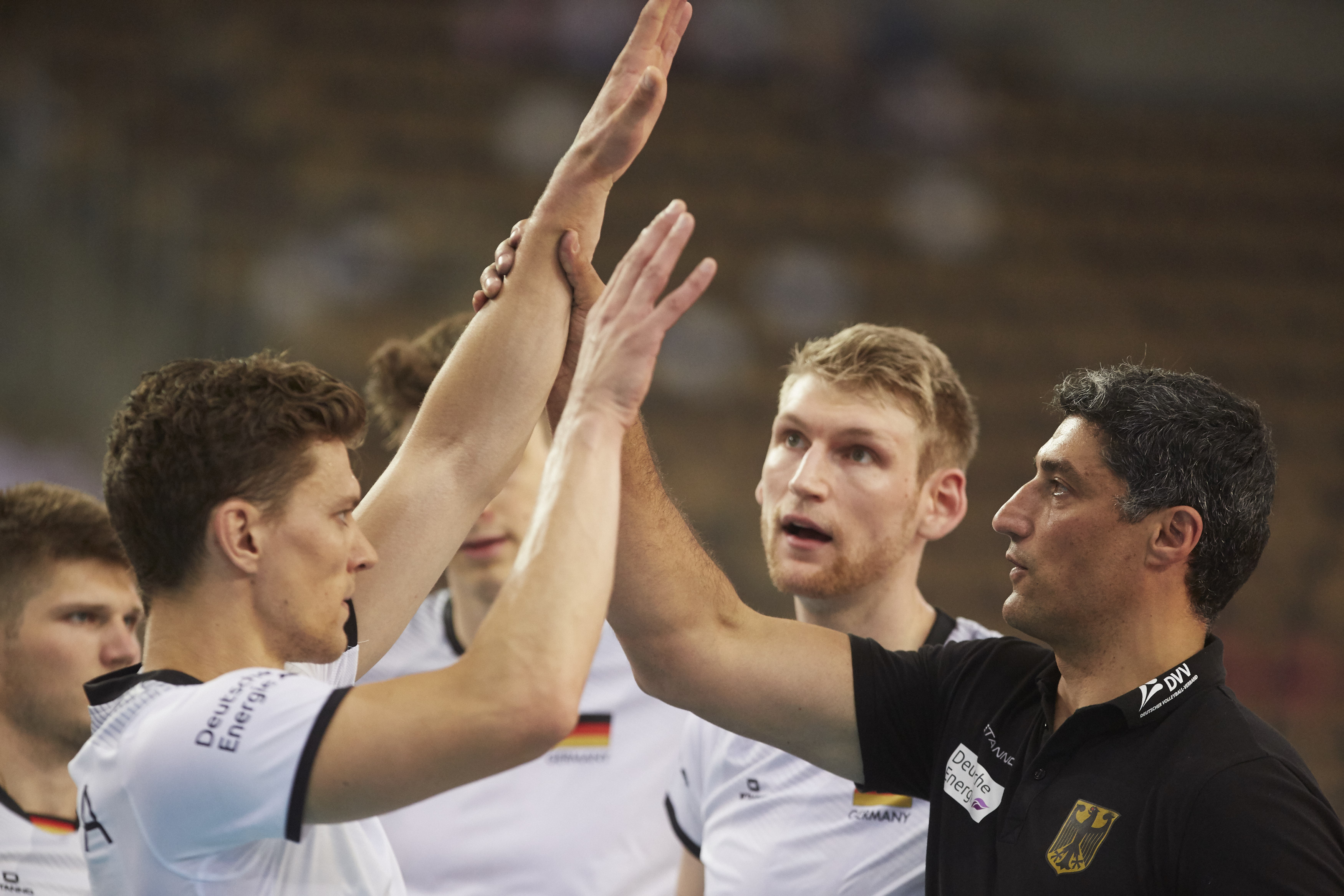 Simon Hirsch listens to coach Andrea Gianni’s instructions during time-out
In a 2018 interview, Hirsh pointed to Wallace De Souza as his volleyball hero, but there is a simple reason he would bench him on the Dream Team of his choice. “If I picked Wallace, then I would not be able to play on my own Dream Team. I’m sorry for him, but he needs to take a seat so this team can feature me on the court,” Hirsch joked.
Among Hirsch’s German teammates, fellow opposites Gyorgy Grozer and Jochen Schoeps are also a great source of inspiration. “Both of them will always be my heroes. When I was starting to play volleyball, I watched them play with my eyes wide open,” he said. “Lukas Kampa is also an amazing inspiration for many young guys - a hard worker with the mind of a leader.”
So who would end up among Simon Hirsch’s ideal teammates? “Setter Bruno Rezende (amazing guy, amazing hands), outside hitters Wilfredo Leon (the best player on the planet right now, I would be stupid not to pick him) and Giba (one of my favourite players to watch), middle blockers Dmitriy Muserskiy (he can change the game - not easy for a middle blocker, but he can do it!) and Thomas Beretta (my team captain, on the court and outside), and libero Jenia Grebennikov (it’s amazing to see his reflexes and work in every aspect of the game!). On the bench I would put my close friends to join me on this team and enjoy the after-work evenings together.”
Quick links - Volleyball:
FIVB.com - Volleyball Nations LeagueFIVB.com - Volleyball
Latest VideosFacebookTwitterInstagram