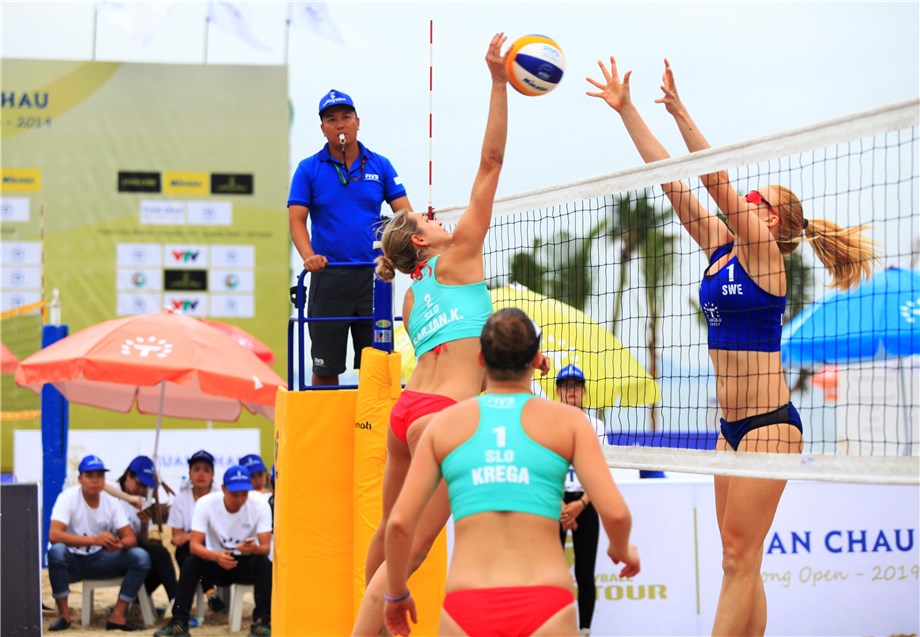 Tuan Chau Island, Vietnam, May 9, 2019 – Klara Kregar and Katarina Fabjan were the lowest ranked team to emerge from Thursday’s qualifications and make the main draw at the women-only one-star stop on the FIVB Beach Volleyball World Tour in Tuan Chau Island. The Slovenes, seeded seventh in the qualification bracket, managed to win two tie-breakers on Vietnamese sand to join qualifying pairs from Austria, Romania and USA among the best 16 of the event.

Kregar and Fabjan were the only duo that scored two wins on the way to the main draw. They started off with a hard-fought 2-1 (20-22, 21-15, 17-15) first-round victory coming back from a set down against Japan’s Shion Tsubouchi and Haruka Arai. In the deciding second round, the Slovenes mastered a 2-1 (21-16, 18-21, 15-11) win over second-seeded Swedes Fanny Lindstrom and Sara Malmstrom in what was the longest-running match of the day – 57 minutes.
The second qualification round offered two more exciting three-setters. Top-seeded Austrians Franziska Friedl and Eva Pfeffer overpowered Russia’s Elena Fediunova and Elizaveta Novikova on the way to a dramatic 2-1 (21-15, 18-21, 16-14) close, while sixth-seeded Americans Kaley Melville and Lindsey Fuller delivered a 2-1 (19-21, 21-18, 15-6) come-from-behind upset of third-seeded Hiroko Matsuyama and Keiko Urata of Japan.
Romania’s Beata Vaida and Ioana-Alexandra Ordean, seeded fourth, were the only team that did not lose any sets on Thursday. Despite an extended second part of their clash with Thailand’s Saowaros Tangkaeo and Jaikatog Duanggaew, Vaida and Ordean managed to close the deal in straight sets – 2-0 (21-12, 22-20).
The main draw battles for World Tour medals and the distribution of the US$ 10,000 prize money are set to begin with a 16-team modified pool play format at 09:00 local time on Friday, followed by the knockout rounds on Saturday and Sunday.
Quick links - Beach volleyball:
FIVB Beach Volleyball World Tour - Tuan Chau IslandFIVB.com - Beach volleyballFacebookTwitterInstagram