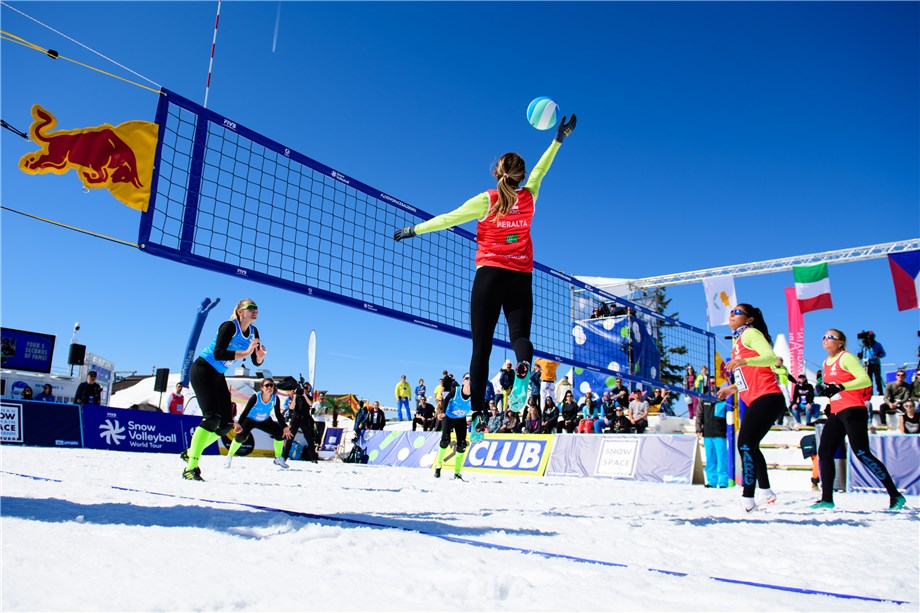 Bariloche, Argentina, July 31, 2019 - The 2019 FIVB Snow Volleyball World Tour makes its first stop outside Europe when Bariloche in the Argentinian province of Rio Negro holds the third and final event in the competition's inaugural season this weekend, with teams from all five continents set to compete for medals.

After successful stages in Wagrain-Kleinarl, Austria, and Plan de Corones/Kronplatz, Italy, snow volleyball lands in another iconic venue for winter sports in Argentina’s Cerro Catedral. The resort features the biggest ski area in South America and the entire Southern Hemisphere, hosting over half a million tourists per season.

Three courts have been prepared at its base standing at 1,030 metres above sea level, where teams from Argentina, Brazil, Cameroon, Chile, China, Czech Republic, Italy, Japan, Lithuania, Nigeria, Russia, Slovakia, Sweden, Turkey, Uruguay and the United States have entered to play for the last batch of medals of this inaugural FIVB Snow Volleyball World Tour.

Expectations are through the roof for the local fans as the team which gave Argentina back-to-back bronze medals at the previous stages in Austria and Italy will also play in Bariloche, including 2012 London Olympian Virginia Zonta alongside Cecilia Peralta, Julieta Puntin and Eugenia Tuliz. The host country is also set to appear for the first time in the men’s event, with the likes of 2018 YOG medallists Mauro Zelayeta and Bautista Amieva leading the charge.

However, it won’t be an easy ride for any of the teams due to the presence of many of the most recent snow volleyball gold medal winners. Russia’s Olga Filina and Anna Romashova, after consecutive titles in Austria and Italy, will try to make it three out of three with newcomer Marina Grechko replacing double-champion Olga Motrich. The alarm is also sounding in the men’s draw with the American team that took gold in Plan de Corones/Kronplatz returning. Troy Field and siblings Riley and Maddison McKibbin will this time be joined by a third and younger McKibbin brother, Jameson, thus constituting a four-player team at the event.
Be sure to watch the event on the FIVB's YouTube and Facebook accounts. The tournament will also be available on the Olympic Channel, NBC and Canal 7 in Argentina.