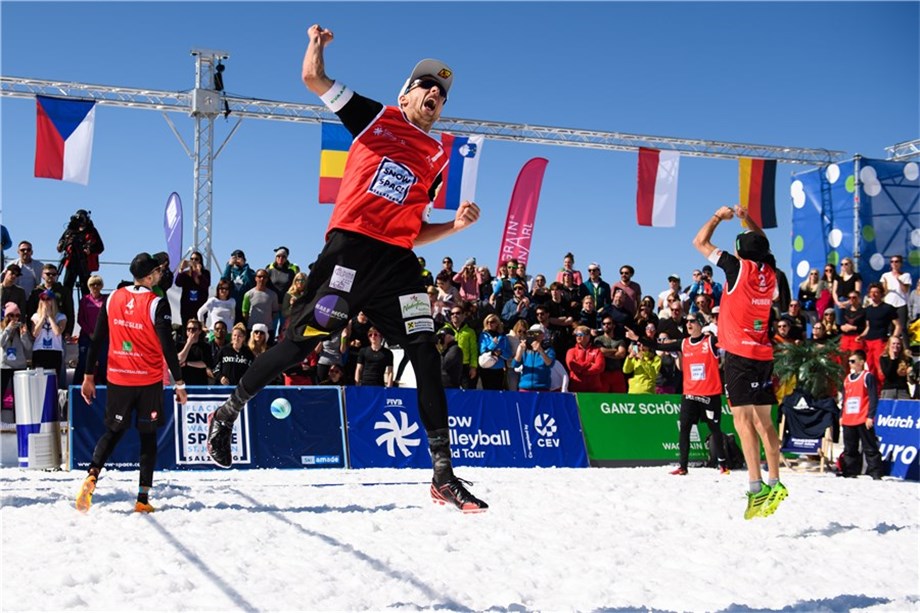 Lausanne, Switzerland, May 3, 2019 - Statistics gathered on the global media coverage and social media activity indicate that the first two legs of the FIVB 2019 Snow Volleyball World Tour in both Wagrain-Kleinarl and Plan de Corones/Kronplatz was a huge success.

The first two legs of the inaugural Snow Volleyball World Tour, which were co-organised with the CEV, began in Wagrain-Kleinarl, Austria, at the end of March before the second stop in Plan de Corones/Kronplatz, Italy, from April 4-7.

All FIVB and CEV social media channels covered the live action, which proved popular as all posts received an impressive 5.4 million impressions. Social media alone generated a reach of more than 60 million, with around 1500 mentions across all channels.

The first two stops of the FIVB 2019 Snow Volleyball World Tour received a combined amount of almost 175 million reaches in international online media coverage, and more than 220 articles written on the action.

Not only this, all of the games were streamed on the FIVB YouTube Channel (www.youtube.com/fivbvolleyball), EuroVolleyTV and the Olympic Channel platform, giving the opportunity to fans around the world to watch the action. Italy’s Rai Sport featured highlights of the Tour on their programme Oltre la Rete and Austria’s ORF also televised the games.

The Tour has attracted volleyball athletes from all five continents, some of whom were competing in the winter conditions for the first time. Argentina’s women’s team made history by winning the country a winter medal in snow volleyball.

As well as new nations, the Snow Volleyball World Tour has also caught the attention of world class players from the disciplines of indoor and beach volleyball. Olympic champion and Brazilian volleyball star Giba joined his compatriots bidding for snow volleyball gold but on both occasions was beaten in the quarterfinals

FIVB President Dr. Ary S. Graça Fᵒ said:
“It is great to see how much snow volleyball has grown, and the first ever FIVB Snow Volleyball World Tour has so far been brilliant and exhilarating to watch.

“Global media coverage is incredibly important to publicise the sport and get more people involved. Volleyball is one of the most popular sports in the world and our athletes are role models for millions of fans globally.”

The FIVB is thrilled to be experiencing positive and substantial growth across a broad spectrum of digital activities for snow volleyball. The organisation is moving forward in its efforts, to use a variety of digital platforms to communicate with fans right around the globe about the new discipline.

The final leg of the FIVB Snow Volleyball World Tour will be held in Bariloche, Argentina, during the first week of August.