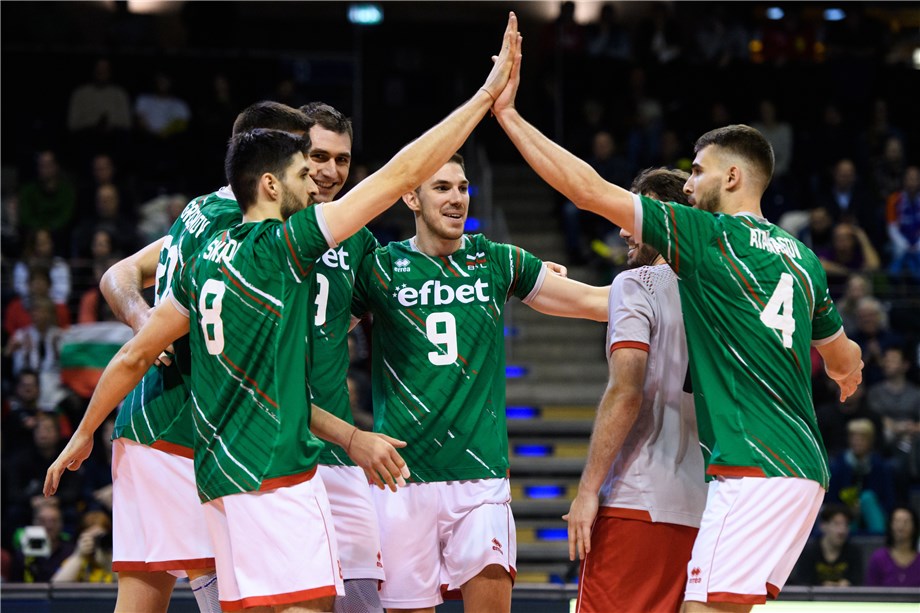 Lausanne, Switzerland, January 6, 2020 – Tsvetan Sokolov powered Bulgaria to a tiebreak victory over France in the first five-setter of the continental Olympic qualifiers on the road to Tokyo 2020. Serbia and hosts Germany were also victorious on the second competition day of the CEV tournament in Berlin, recording straight-set wins over the Netherlands and Belgium, respectively.
CEV qualification tournament
Bulgaria opened their Pool B campaign in Berlin with a spectacular 3-2 (25-23, 17-25, 25-22, 19-25, 15-8) win over France on Monday. With both teams putting in a lot of power from the serving line, they hammered a total of 27 aces over the five sets of play with Bulgarian captain Viktor Yosifov leading the way with four. He also led the blockers with five stuffs. In the deciding set, opposite Tsvetan Sokolov proved a true leader and hammered five points, including the tiebreak’s only two aces, towards the emphatic closing. With a total of 23 points to his name, he topped the charts of the match, followed by French counterpart Jean Patry with 20.
In Pool B’s early match on Monday, Serbia rebounded from Sunday’s straight-set loss to France with a 3-0 (25-18, 25-18, 25-17) straight-set win over the Netherlands. Captain Nemanja Petric was the best scorer of this one-sided game with 15 points to his name, including two aces and two stuffs.
In Pool A’s only game of the day, Germany gained their second clean-slate victory, a hard-fought 3-0 (25-18, 25-23, 26-24) shutout of Belgium with a remarkable performance by setter Lukas Kampa. Opposite Gyorgy Grozer top-scored 22 points, but sustained a calf injury and left the court just four rallies from the end.
Men’s continental qualifier action continues on Tuesday with day three of the European event in Berlin and the start of Asian and the African tournaments in China and Egypt, respectively.
● Europe: January 5 - 10 in Berlin, Germany
● Asia: January 7 - 12 in Jiangmen, China
● Africa: January 7 - 11 in Cairo, Egypt
● South America: January 10 - 12 in Santiago, Chile
● North, Central America and Caribbean: January 10 - 12 in Vancouver, Canada
Quick links - Volleyball:Continental Tokyo Volleyball QualificationFacebookTwitterInstagramYoutube