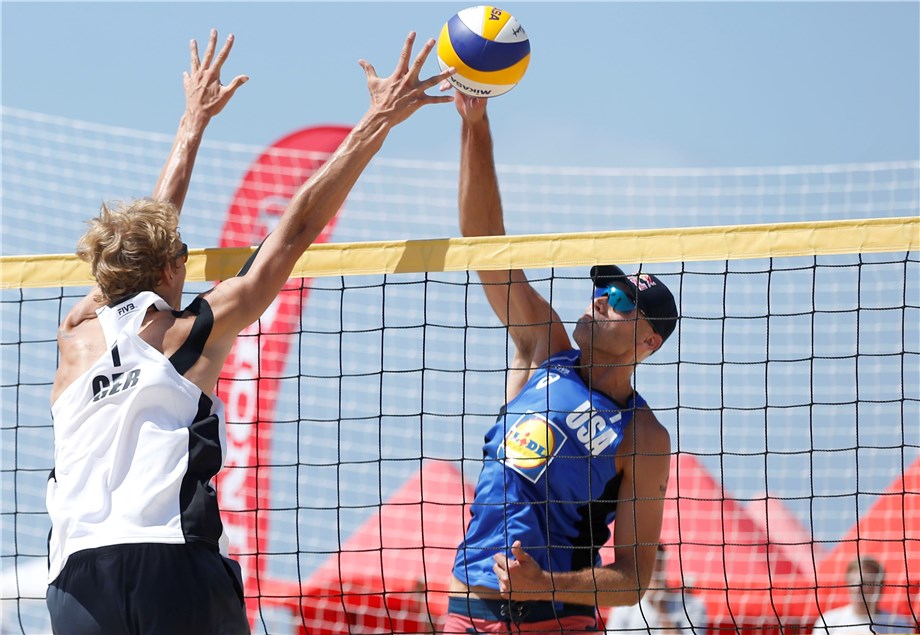 Espinho, Portugal, July 16, 2019 – The town of Espinho on the Atlantic coast of Portugal, one of the veteran venues on the FIVB Beach Volleyball World Tour, is hosting yet another Tour event this week, from July 16 through 21. Having welcomed the world’s beach volleyball elite from 1995 to 2007, Espinho reappeared on the World Tour calendar in 2017 with a men-only two-star event and upgraded to a double-gender four-star event in 2018 and 2019. This will be the overall 16th men’s and the 11th women’s FIVB tournament in the city, known as the volleyball capital of Portugal.
104 teams (52 men’s and 52 women’s pairs) representing 32 different countries have registered for the tournament in Espinho, attracted by the appealing conditions at the sandy Atlantic beach and the total of $300,000 of prize money. In each gender, a 32-team main draw will feature a modified pool play system with the top three teams in each four-team pool progressing to the single elimination phase. The pool winners will advance directly to the round of 16, while the pool runners-up and the third-placed pairs will play in the round of 24. With 24 duos seeded directly into the main draw, the remaining eight spots will be contested in qualifications to be played on Wednesday, July 17, for women and on Thursday, July 18, for men.
The impressive list of participants is headed by Russia’s Konstantin Semenov & Ilya Leshukov in the men’s line-up on entry points. With two gold and three bronze medals on their World Tour tally, the pair will be looking for their sixth podium finish. Two-time Olympian Semenov also has two first, three second and two third place finishes on the Tour from the time before he partnered with Leshukov.
39-year-old legends Nicholas Lucena & Philip Dalhausser of USA come in next on entry points. Dalhausser is a 2007 world champion and a 2008 Olympic champion. He also played at the next two editions of the Olympic Games, in 2016 alongside Lucena. In addition, Dalhausser’s showcase contains 66 (37 gold, 16 silver, 13 bronze) World Tour medals, while that of Lucena has “only” 25 (9 gold, 11 silver, 5 bronze).
Another legendary American, 43-year-old Jacob Gibb, is on the team that completes the top three of the men’s entry list. The three-time Olympian has won six gold, eight silver and seven bronze medals on the World Tour, but all in 2015 or earlier. His partner since 2017, 27-year-old Taylor Crabb, has never won a World Tour medal, so both will be eager to reach the podium at Espinho.
Last year’s Espinho champions Aleksandrs Samoilovs and Janis Smedins of Latvia are also among the 24 pairs directly qualified for the men’s main draw this year. The remaining 20 include four from Brazil, two each from Italy and hosts Portugal and one each from Belgium, Canada, Chile, China, Czechia, Germany, Latvia, the Netherlands, Qatar, Spain, Switzerland and USA.
The women’s preliminary seeding for Espinho is topped by Czech pair Barbora Hermannova & Marketa Slukova, participants in the Rio Olympics. Since they teamed up in late 2015 Hermannova & Slukova have tallied four gold, three silver and one bronze medal on the World Tour. Previously, Slukova, who also played at the 2012 Olympics, had two gold and one bronze World Tour medals, while Hermannova managed to top the podium once.
The number two team in the FIVB World Rankings, Ana Patricia Silva Ramos & Rebecca Cavalcanti Barbosa Silva, are also number two on entry points for Espinho. The Brazilian pair have already won three gold, two silver and two bronze medals on the 2019 World Tour since October 2018, including a third place finish at the Gstaad five-star last week. 21-year-old Ana Patricia is also a 2014 Youth Olympic champion and a two-time U21 world champion, alongside Eduarda Santos Lisboa (Duda).
20-year-old Duda, who is also a three-time U19 world champion, and her current partner, 36-year-old Agatha Bednarczuk, 2015 world champion and 2016 Olympic silver medallist, come in third on the Espinho preliminary seeding. As a pair, Agatha & Duda have claimed four gold, three silver and five bronze medals on the World Tour.
The remaining 21 pairs seeded directly into the women’s main draw are made up of three American, three Russian, two Chinese, two German, two Portuguese, and one each from Brazil, Finland, Italy, Japan, the Netherlands, Poland, Slovakia, Spain and Switzerland.
Quick links - Beach volleyball:
FIVB Beach Volleyball World Tour - Espinho
FIVB.com - Beach volleyball
Facebook
Twitter
Instagram