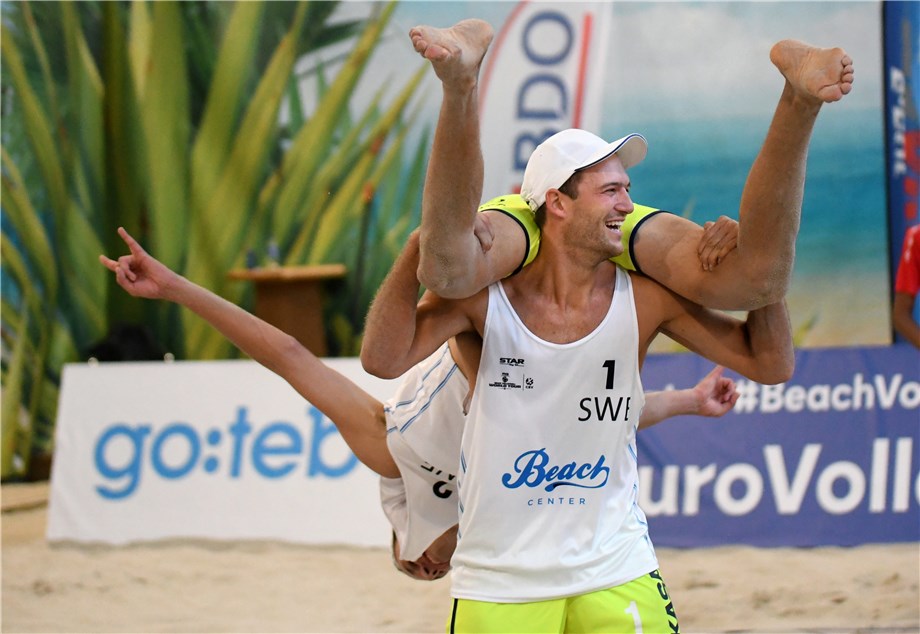 Gothenburg, Sweden, April 20, 2019 – The four semifinalists at the one-star stop on the 2019 FIVB Beach Volleyball World Tour in Gothenburg emerged after a busy competition day in the men’s main draw at the indoor Beach Center. Unlike the previous two days, when the vast majority of matches got extended to three sets, on Saturday, all but one of the 16 games were resolved in straight sets. Pairs from Belarus, Latvia, Sweden and Turkey topped the pool standings and followed up with winning the quarterfinals to advance to the battles for the spots in Sunday’s gold medal finale. 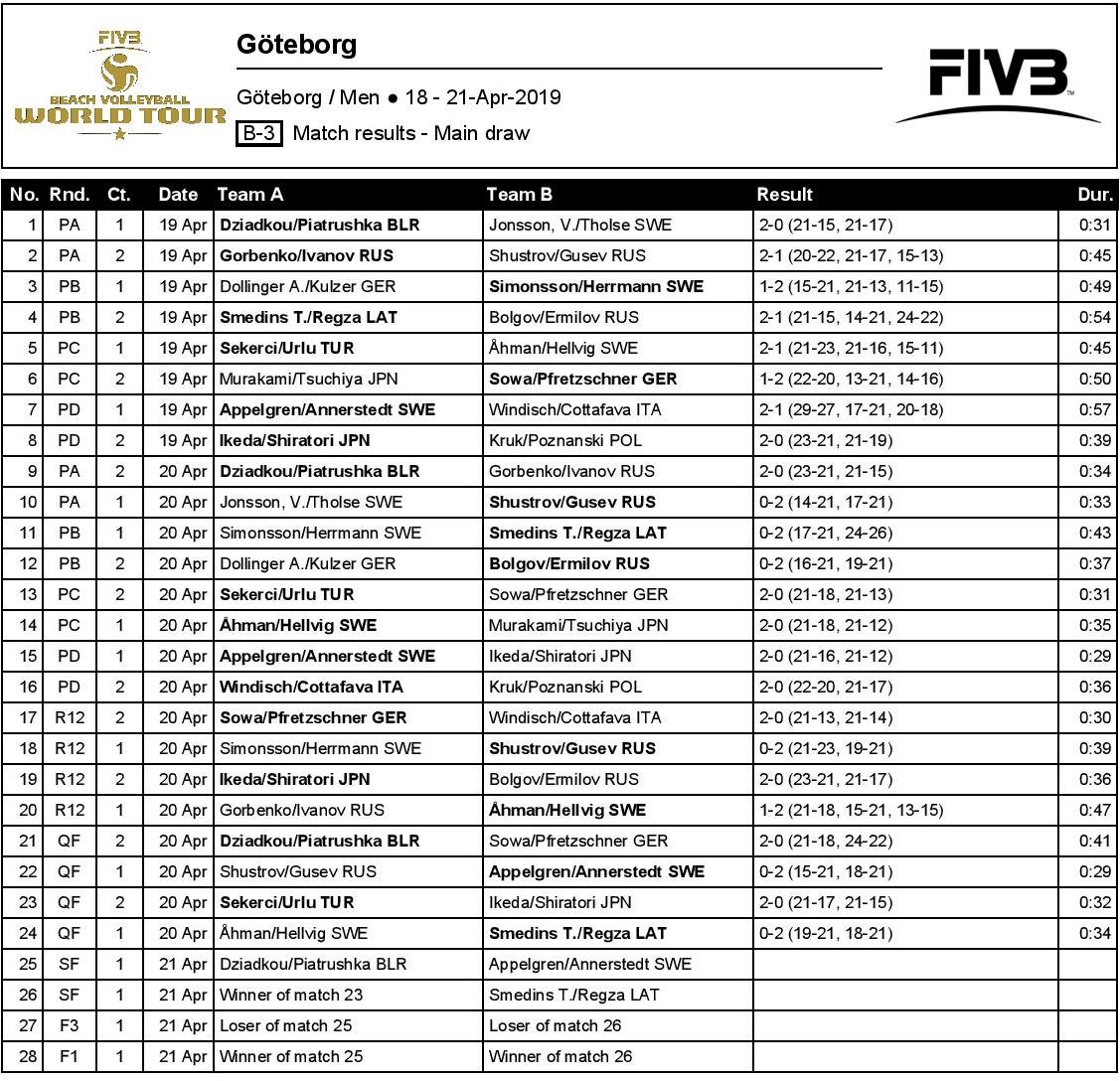 Martin Appelgren and Alexander Annerstedt gave the home crowd a lot to cheer for. The fourth-seeded Swedish pair first topped the table in Pool D after a 2-0 (21-16, 21-12) shutout of Japan’s Jumpei Ikeda and Katsuhiro Shiratori to advance directly to the quarterfinals, where they claimed another speedy win – 2-0 (21-15, 21-18) over Russia’s Pavel Shustrov and Alexey Gusev – to step further into the semis.
"It is an amazing feeling to play here, at Beach Center. It is impossible to describe. The support is unreal and we can’t believe how great the setup for this tournament is. We are feeling good and it is a great start of the season for our new team and it really shows that all our training paid off. We are enjoying every point and will continue to do so,” said Appelgren after the quarterfinal victory.
The other Swedish team in the quarterfinals, 14th-seeded David Ahman and Jonatan Hellvig, who had won the survival match of Pool C against Hitoshi Murakami and Takashi Tsuchiya of Japan and the first elimination round clash against Russia’s Sergey Gorbenko and Vasilii Ivanov earlier on Saturday, stopped short of making it further to the semifinals. They could not overcome their quarterfinal hurdle, Toms Smedins and Haralds Regza. The seventh-seeded Latvians managed a hard-fought 2-0 (21-19, 21-18) victory to move on to the last four. Smedins and Regza reached the quarterfinals directly as pool winners after another tough win over Swedish opponents - 2-0 (21-17, 26-24) against Ludvig Simonsson and Alexander Herrmann – in the Pool B decider. 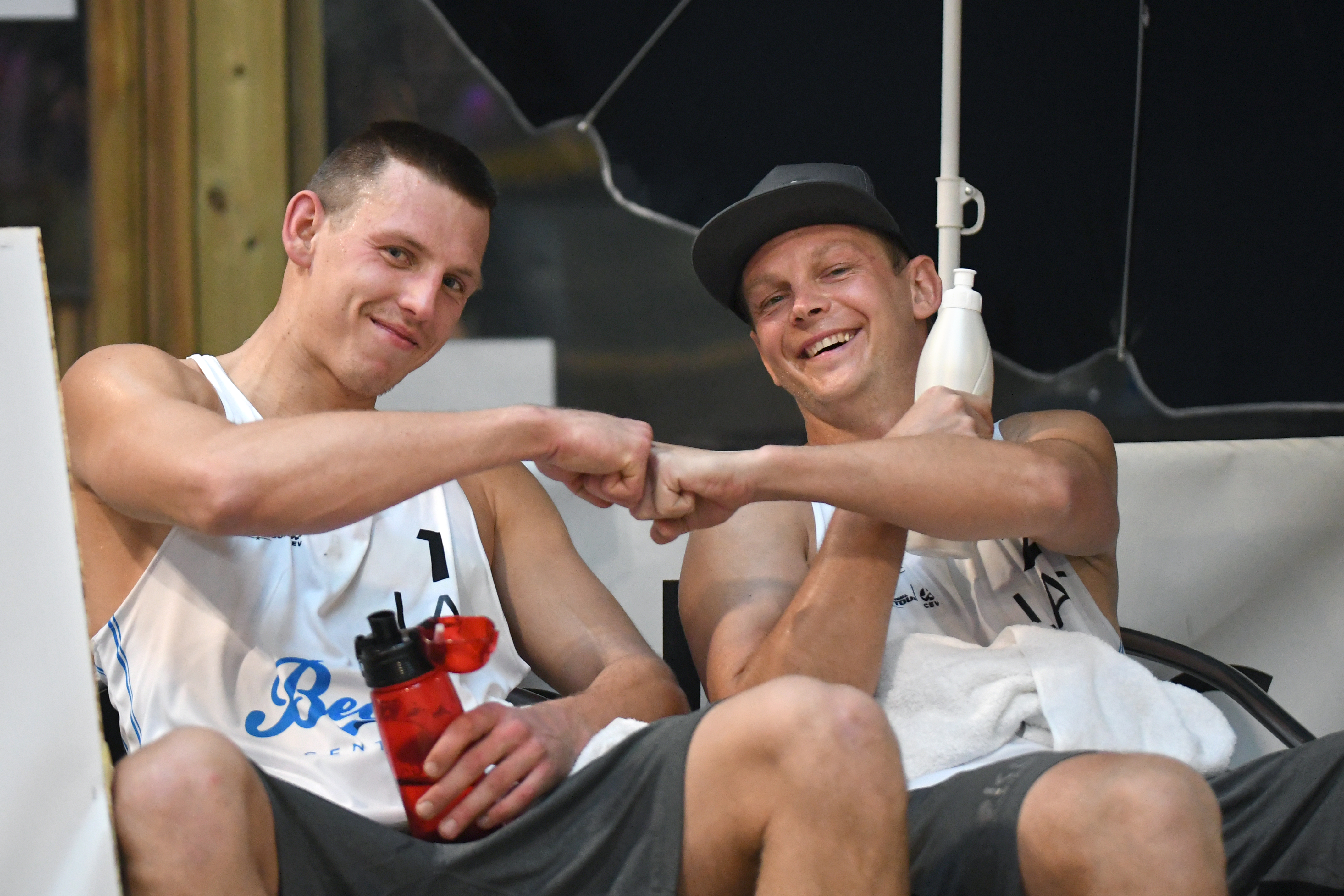 Latvians Smedins and Regza smile after a successful day on the courts at the Beach Center in Gothenburg
Selcuk Sekerci and Safa Urlu were quite emphatic in their two games on Saturday. The third-seeded Turks started their day with a 2-0 (21-18, 21-13) shutout of Germany’s Robin Sowa and Lukas Pfretzschner to win Pool C and finished it with a 2-0 (21-17, 21-15) quarterfinal victory over Ikeda and Shiratori.
Top-seeded Belarusians Aliaksandr Dziadkou and Pavel Piatrushka had a more challenging day on the way to the semifinals. To win Pool A, they mastered a 2-0 (23-21, 21-15) win over Gorbenko and Ivanov. In the longest of the four quarterfinals, Dziadkou and Piatrushka outplayed Sowa and Pfretzschner to claim a 41-minute 2-0 (21-18, 24-22) victory.
On Sunday at 11:00 local time, Dziadkou and Piatrushka will meet Appelgren and Annerstedt in the first semifinal. Sekerci and Urlu will face Smedins and Regza at 12:00. The third-place match is set to start at 14:00 and the big final for the title – at 16:00. All games are streamed live on EuroVolley.tv.
Quick links - Beach volleyball:
FIVB Beach Volleyball World Tour - GothenburgFIVB.com - Beach volleyballFacebookTwitterInstagram