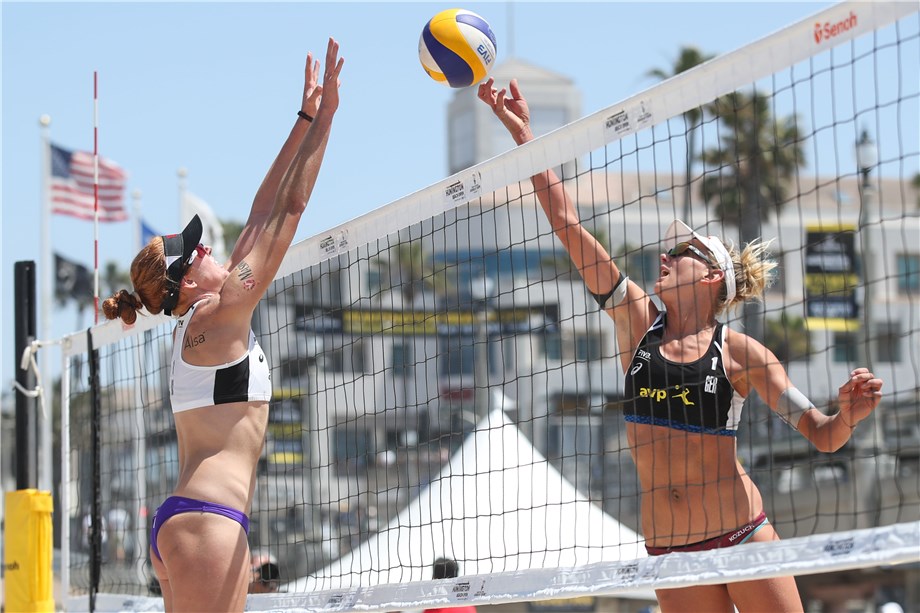 Competing at the Huntington Beach Open net are Kelly Claes (left) of the United States and Germany's Margareta Kozuch.

Huntington Beach, USA, May 3, 2018 - Germans Karla Borger and Margareta Kozuch were one of two teams to post a pair of wins here on Thursday during the opening rounds of the $300,000 Huntington Beach Open after advancing to the third round of the winners' bracket with victories over two American teams. 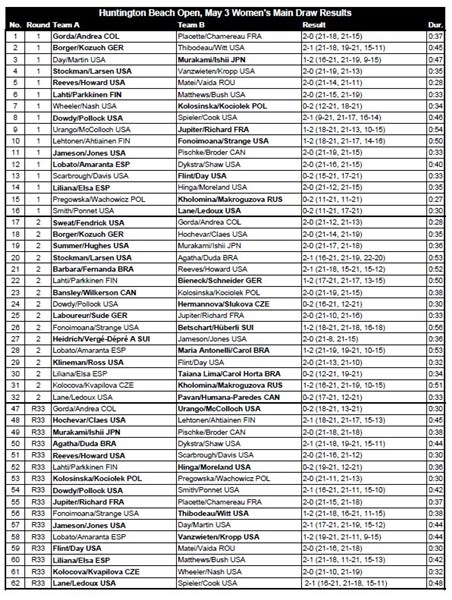 Seeded 17th in the FIVB World Tour event being played north of the Huntington Beach Pier where more than 5,000 fans were on hand to witness 96 beach volleyball matches on 10 courts, Borger and Kozuch had to survive a three-set scare from 48th-seeded qualifiers McKenna Thibodeau/Madison Witt to advance to a third round with a win over 16th-seeded Kelly Claes/Brittany Hochevar. 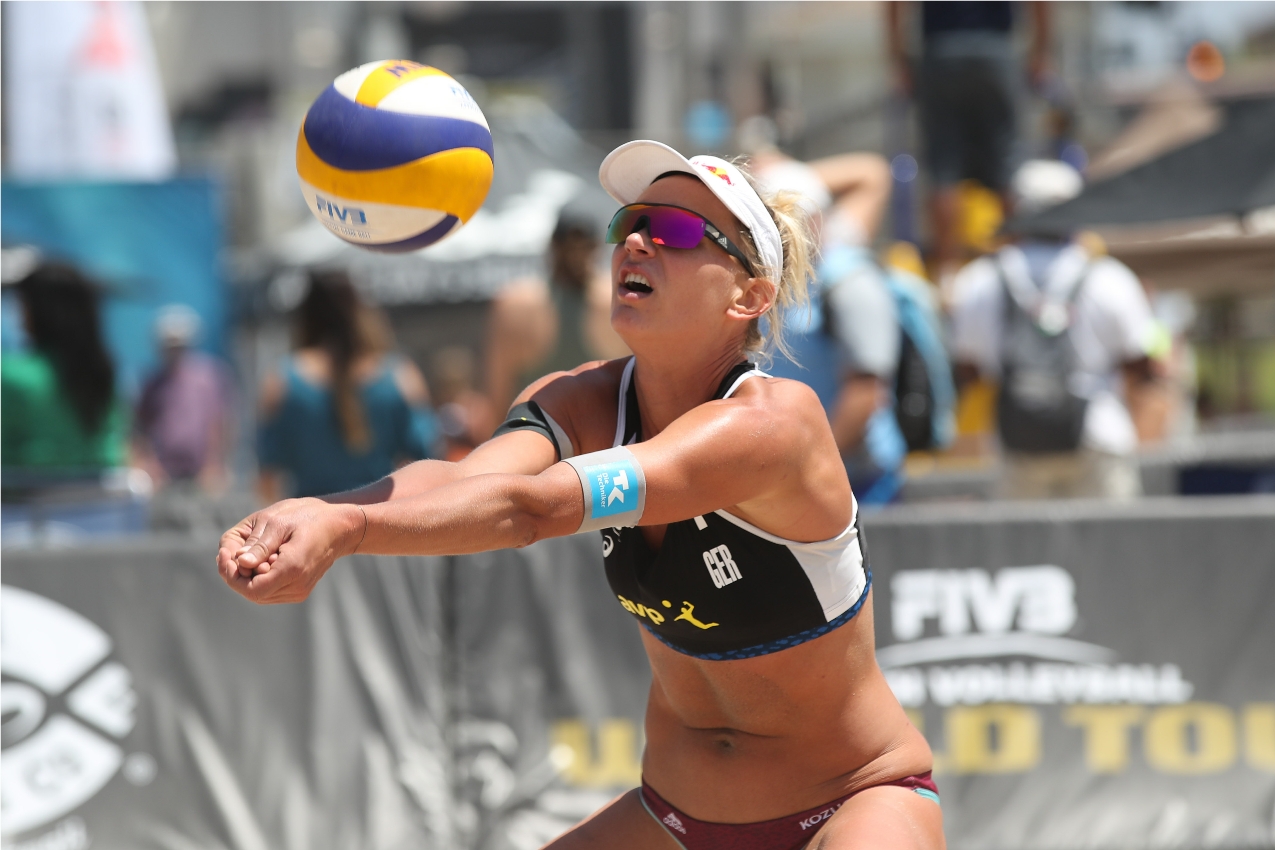 Germany's Karla Borger zeros in on the Mikasa return
Borger and Kozuch posted an opening victory on Thursday with a 2-1 (21-18, 19-21, 15-11) in 45 minutes over Thibodeau and Witt, who are identical twins and entered play on Thursday after winning three qualifying matches on Tuesday and Wednesday. The Germans ended the day with a 2-0 (21-14, 21-19) win in 35 minutes over Claes and Hochevar, who earned a silver medal two weeks ago at a FIVB World Tour event in Xiamen, China.
With the two wins, Borger and Kozuch challenge top-seeded American Olympians Lauren Fendrick and Brooke Sweat, who posted a 2-0 (21-12, 21-13) win in 28 minutes over 33rd-seeded Andrea Galindo/Claudia "Gorda" Galindo in the pair’s only match on Thursday. It was Fendrick and Sweat’s only match as the two are playing in their first international event together since August 2016 when the pair placed fifth at a FIVB stop in Long Beach.
In talking about her first win on Thursday with Kozuch over Thibodeau and Witt, Borger said it was “A super early match. It was kind strange to play early in the morning against a new team. It was just different. We struggled for sure but those are the games that develop our game. Knowing you’re not leading, you’re kind of two or three points behind, you still have to make it, everyone expects you to win. The struggle to win those games is a good thing we’re developing.”
Kozuch, who is entering her second year of beach volleyball competition after being Germany’s top indoor player for years said: “I don’t have so much experience on the sand because it’s still quite new but we’ve played enough to know what happens during the tournament if you don’t know the opponent, so we can check that out and see a little bit of the game of who is supposed to be our opponent. The twins also had a good crowd, they are athletic. It was a little bit of pressure but it’s a great experience.”
As for the second win on Thursday, Kozuch said: “We were also practising a little bit together (with Kelly and Brittany) last week so it was different preparation. Also we had already played once, they didn’t play, they were waiting and could see our match this morning. We entered this one more in the competition mood I would say.”
Hochevar said: “I think there’s good or bad in everything. Everybody’s good out here. We’re dealing with elements, everybody’s good, I don’t know if there’s necessarily an advantage. That’s what you tell yourself anyway.” 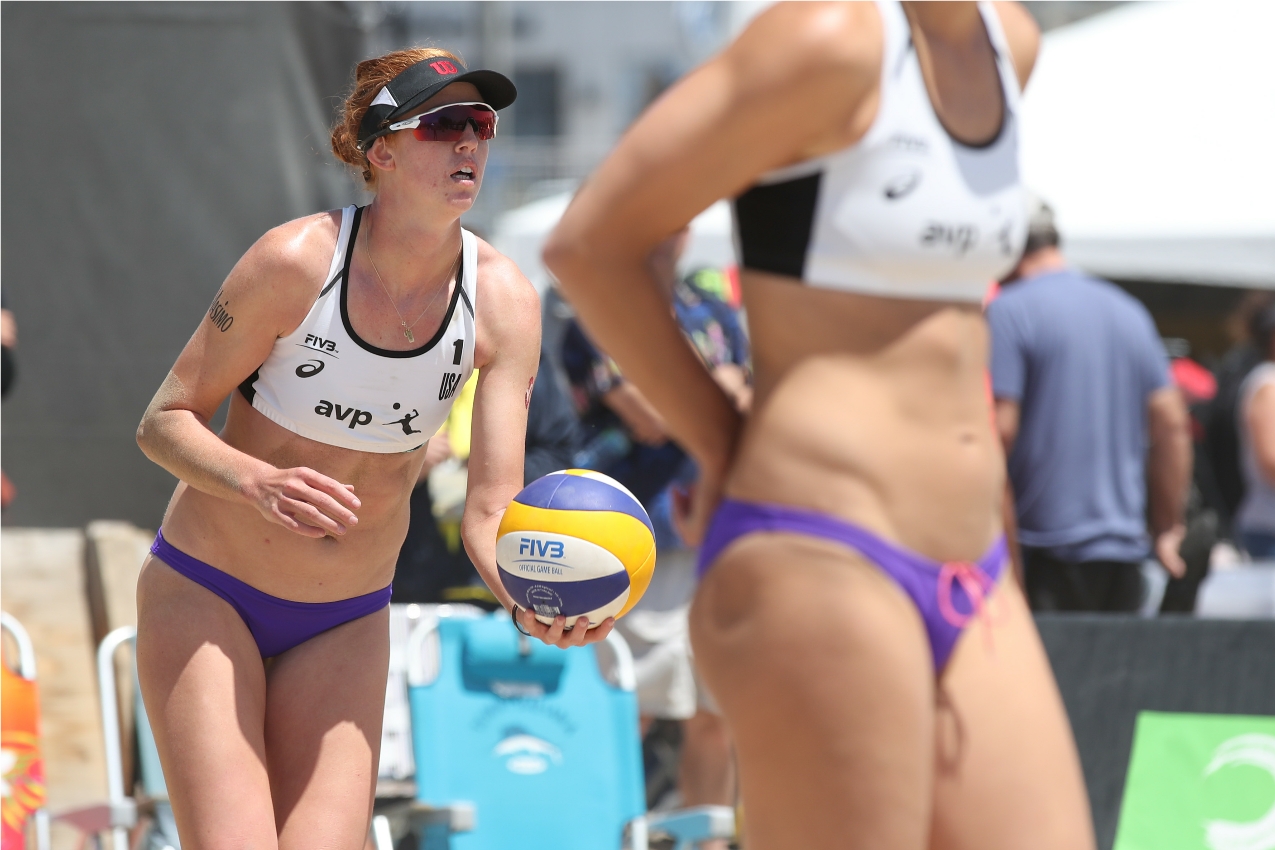 Claes added that “everybody out here is good so I don’t think we are any more or less of a target (after the silver finish in Xiamen). Everybody out here can be beaten and can win. It’s who steps on that court, plays their game and does the work.”
Also posting two winners' bracket wins on Thursday were 25th-seeded Kelly Larsen and Emily Stockman of the United States. After posting a 2-0 (21-19, 21-13) win in 35 minutes over compatriots Jenny Kropp/ Kendra VanZwieten in the early morning, Larsen and Stockman bounced back in the afternoon to score a 2-1 (16-21, 21-19, 22-20) victory in 53 minutes over eighth-seeded Agatha Bednarczuk/Eduarda "Duda" Lisboa of Brazil.
Larsen and Stockman, who lost to Agatha and Duda 2-0 (21-16, 21-16) in a 31-minute pool play match in Xiamen, will play ninth-seeded American rivals Sara Hughes and Summer Ross in a winners' bracket third-round match on Friday morning. Hughes and Ross opened play on Thursday with a 2-0 (21-17, 21-18) win in 36 minutes over 24th-seeded Miki Ishii/Megumi Murakami of Japan.