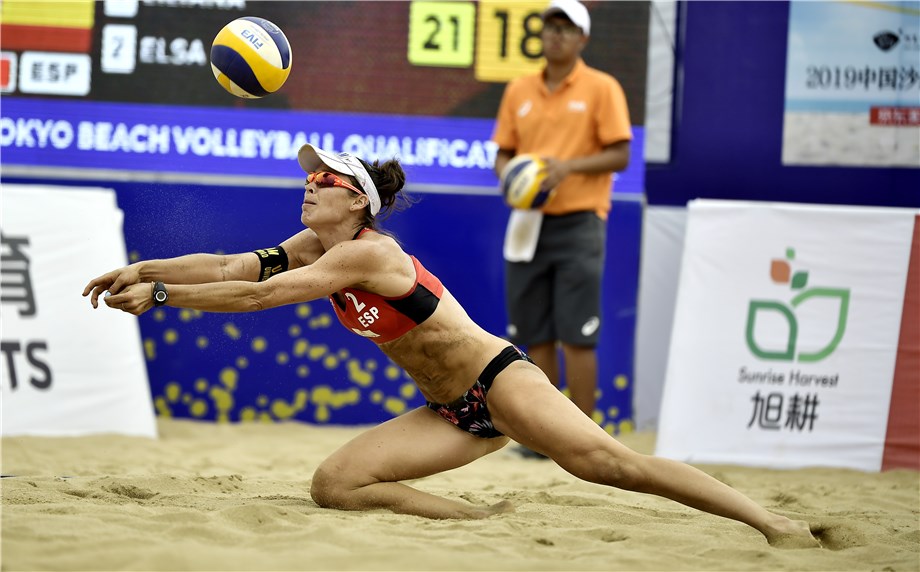 Spanish success on Friday for Liliana Fernandez and Elsa Baquerizo (above) as the pair posted two wins over teams from China and the Czech Republic to move closer to the finals at this week's FIVB Tokyo Beach Volleyball Olympic Qualification tournament.

Haiyang, China, September 20, 2019 - After winning two of their first four matches at the FIVB Tokyo Beach Volleyball Olympic Qualification tournament, Elsa Baquerizo and Liliana Fernandez of Spain completed a perfect day here Friday to gain the leadership of their pool.

However, the Spaniards must secure a win over Katarzyna Kociolek/Kinga Wojtasik of Poland on Saturday morning to win Pool I and gain a place in Sunday's final two matches where the winning pairs will claim a berth for their countries in the Tokyo 2020 Olympic Games.
In case of a setback to the Polish pair, Elsa and Liliana still can advance to Sunday's finals if Fan Wang and Xinyi Xia of China defeat Barbora Hermannova/Marketa Slukova of the Czech Republic in Saturday morning’s other Pool I match.
"What a day with two big wins," said the 32-year-old Elsa after their last match on Friday as the Spaniards are seeking their third trip to the Olympics after placing ninth at both the London 2012 and Rio 2016 Summer Games. "We still have the pressure of winning on Saturday against Poland, so we need to be at our best against another good team."
After posting a 2-1 (11-21, 21-17, 15-11) win in 46 minutes over Wang and Xia to open play Friday for their second win in three FIVB meetings with the Chinese, Elsa and Liliana posted their fourth win in six matches with Hermannova and Slukova by defeating the Czech Republic pair 2-0 (22-20, 25-23) in 41 minutes.
Quick links - Beach volleyball:
Tokyo Beach Volleyball Qualification - Haiyang
Facebook
Twitter
Instagram
In Pool J, the same scenario holds true for Marta Menegatti and Viktoria Orsi Toth as the Italians must defeated Sandra Ittlinger/Chantal Laboureur of Germany to win the group outright. Menegatti and Orsi Toth posted wins Friday against Tina Graudina/Anastasija Kravcenoka of Latvia 2-0 (21-17, 21-19) in 38 minutes and 2-1 (17-21, 21-13, 15-12) in 47 minutes over Lena Plesiutschnig/Katharina Schutzenhofer of Austria.
With a loss to the Germans, Menegatti and Orsi Toth can still advance to the finals if Plesiutschnig and Schutzenhofer defeat Graudina and Kravcenoka. To note, Ittlinger and Laboureur hold a 2-1 edge over the Italians in FIVB matches with Graudina and Kravcenoka winning four of five meetings with the Austrians.