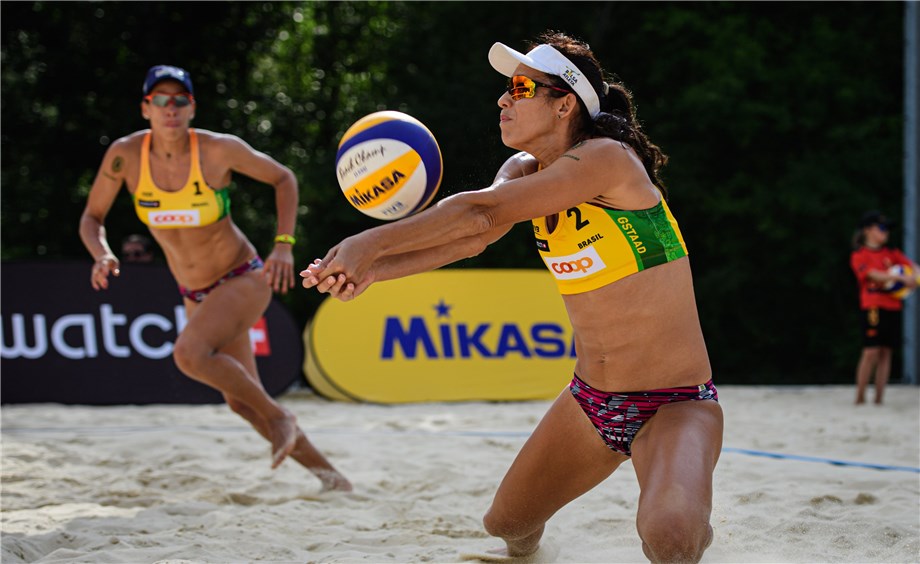 Talita Antunes (right) returns to the FIVB World Tour after missing the 2018 season to give birth to her son.

Gstaad, Switzerland, July 11, 2019 - It’s almost as if Talita Antunes were learning to walk again. Just like her 1-year-old son.
Quick links - Beach volleyball:
FIVB Beach Volleyball World Tour - Gstaad, Switzerland
FIVB World Tour - Daegu, Korea
FIVB World Tour - Alba Adriatica, Italy.
FIVB.com - Beach volleyball
Facebook
Twitter
Instagram
When the three-time Olympian from Brazil interrupted her beach volleyball career to start a family with husband Renato, it was with the intention that she was done with traveling on the FIVB World Tour.
But sure enough, there is Talita in familiar form, winning matches, advancing through tournaments after convincing fellow veteran Taiana Lima to join forces. However, that was not the original plan.
“At the beginning I planned to get pregnant and let life go on,” Talita said. “I was not sure about coming back to play again. That was not my plan.”
Things changed on the Brazilian domestic tour.
“I started slow and I played one tournament in Brazil, two, three, I was getting better step by step,” Talita said. “Since the beginning I spoke to (Taiana) and said I’m not sure I want to do this again, play the qualifications for the World Tour. I will try if I feel good and I feel I can play at a high level again.
“In Brazil we got good results, in the last tournament we got to the final and lost to Barbara (Seixas) and Fernanda (Alves). I said ‘OK, why not?’ I was looking for some answers - if I was happy inside the court, I want to be a champion again, I want to do my best and I had all the answers and I said ‘OK, let’s try this.’”
But there are rules, foremost being that Renatinho (Little Renato) picks up some frequent flyer miles. Talita may be a fierce competitor, but she doesn’t want to wake up and discover that she missed a bit of development.
“In the beginning my first plan was if I came back to play, he comes with me,”
Talita said. “Without him I don’t want to play. That’s the rule, my son is with me. I don’t want to miss anything.”
She’s not the only one. This week in Gstaad, players’ kids are everywhere. Laura Ludwig of Germany, Kerri Walsh Jennings of the United States, Viki Arvaniti of Greece, Marleen Van Iersel of the Netherlands have half an eye off the court.
“They are friends, we talk all the time about kids,” Talita said. “We started at the same time then we have our children and they are all together. We have nice friendships.”
Now it’s working her way back into the position where she can compete the way she wants. When she left off in 2017, Talita had won three FIVB World Tour events that year with Larissa Franca. 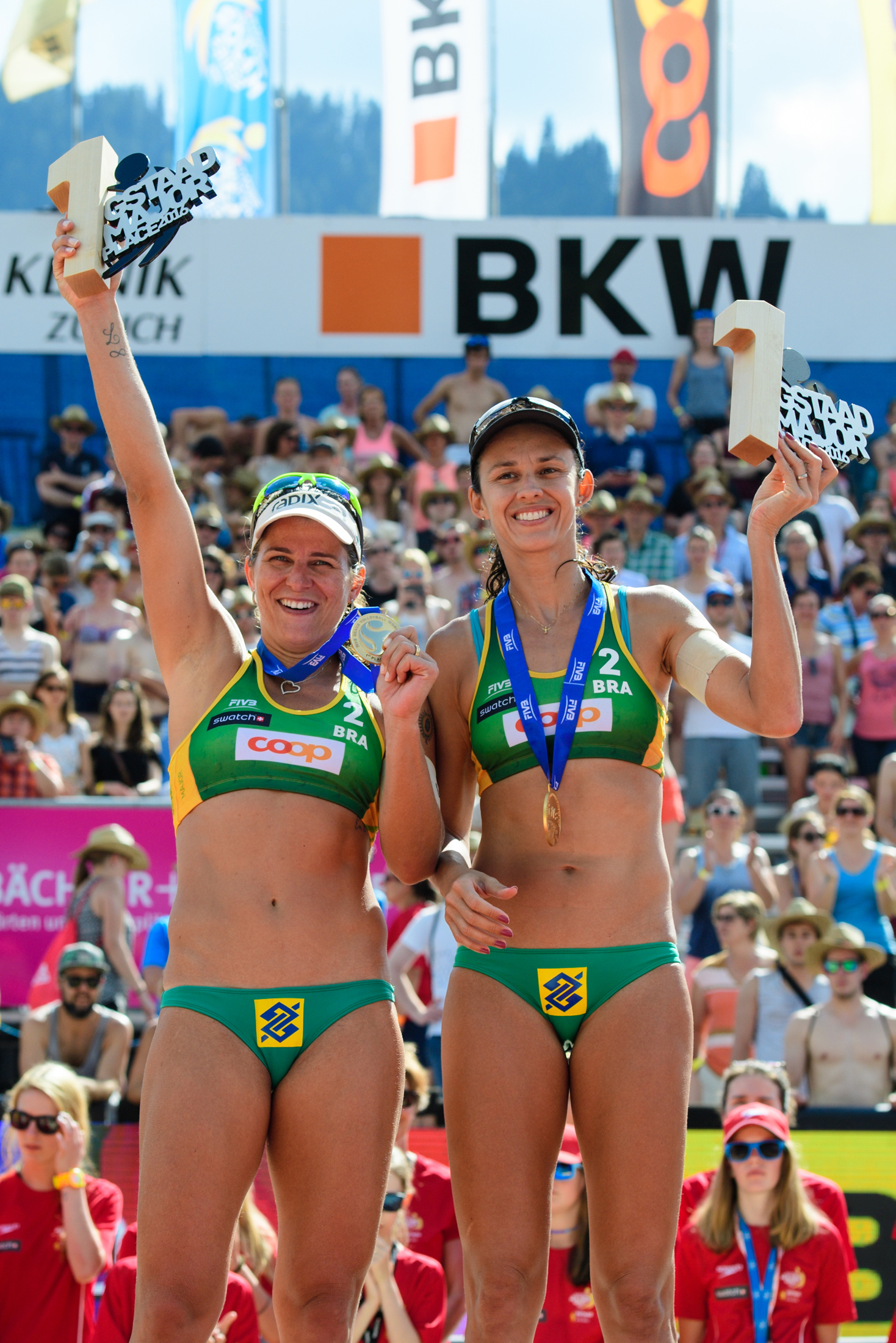 Talita Antunes (right) captured a Swatch Major Gstaad gold medal in 2016 with Larissa Franca
Gstaad is her sixth tournament of the year and she has had to work her way through the qualifiers in each one. But one of these days, that main draw will beckon
“I feel happy that I’m back. It’s not easy, step by step,” Talita said. The shape is not back, but I think my mind is still working well.
“Now I have mixed feelings. I have my son with me so all the time even when I’m losing the match, he’s there with me. It’s different. When I lose, I come to him and I’m strong again. When I win it’s real nice because he’s smiling all the time. When I lose, I get his smile. So, it’s always good with him.”