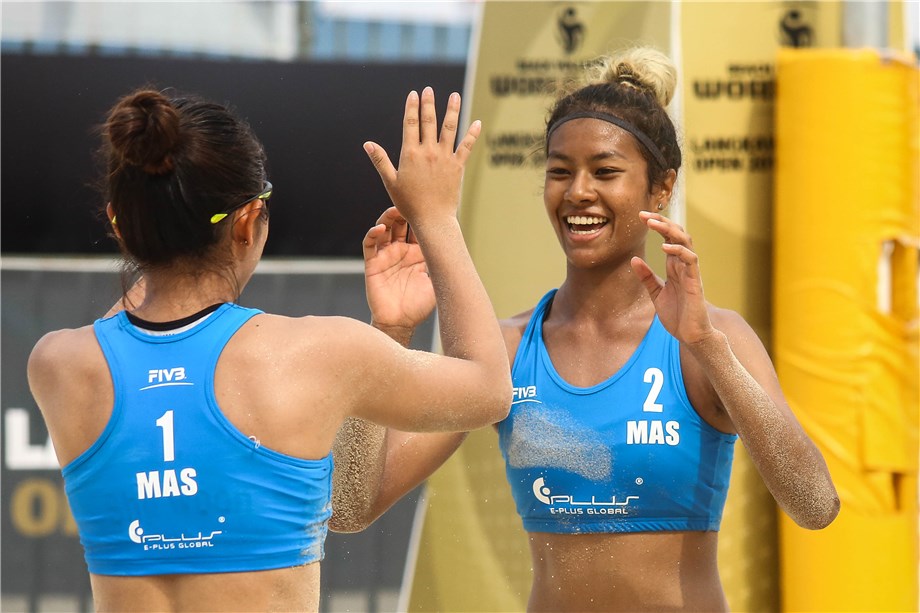 Tasha represented her country in volleyball at age 16 but realised that the indoor discipline was not the best fit for her until she tried playing on sand. Now the 18-year-old is eager to learn and compete in beach volleyball more than ever before.

“I had been involved in volleyball since I was 10, and just had so much passion for the sport. When I was 16, I was lucky to represent the national team, but I realised that we did not have a thriving volleyball community in Malaysia like in other countries. I began to lose hope and I even promised myself that after my high school graduation, I would be done with volleyball and move on to other things in life,” Tasha recalled.

“However, as fate would have it, the national federation decided to participate in the 2019 Southeast Asian (SEA) Games beach volleyball tournament, which was a year after I had finished high school. I was not keen at all and I wanted to pursue other passions, but my childhood coach, who was a beach volleyball player himself, told me to give it a shot. He trusted that I could do it and said that beach volleyball would be fun and exciting. So I listened to him and I fell in love with the sport. Beach volleyball made me rediscover my true passion and love for volleyball.”

Tasha Mae struggled as an indoor volleyball player, but her mindset changed completely from the moment when she shifted to beach volleyball.

“We were somehow unprepared when we went for volleyball competitions. We felt it was difficult to compete against neighbouring countries like Thailand, Indonesia and Vietnam. I did not like that feeling and I did not see myself dedicating my life to something that bore no fruit.

“The main thing that motivates me about being a beach volleyball athlete is hope. I know that we can go far here even if it is just a small group of people who are willing to do what it takes to finally accomplish something for Malaysia. That’s what keeps me going.”

Tasha Mae is still learning the ropes of being a beach volleyball player, but competing regularly has taught her a few valuable lessons along the way.

“I think the most valuable lesson that I have learned from beach volleyball is flexibility and adaptability. Whoever can switch it up fast according to the circumstances will win the game.

“There are so many factors to consider in beach volleyball – the weather, the audience, your mental state, your fitness level – all of these and figuring it all out by yourself. There’s no coach who would tell you what you should so, which calls you should make, what plays you should do.

“I guess all of that comes with experience and I’m still trying to understand it all, because the more I know, the more I realise that I don’t know. Beach volleyball definitely challenges my mental state because as a player you have to be really independent and sort things out with your partner as quickly as possible or else you will lose the game. You have to be a thinking player all the time.”

She has been training regularly since playing on the FIVB Beach Volleyball World Tour and the SEA Games.

“We usually have a centralised training two to three weeks before each tournament. As for the big tournaments like the SEA Games, we had been training and competing all year round. Our training consists of a lot of court sessions but not too many gym sessions because we still have to brush up on our skills.”

In just her first year playing beach volleyball, Mae has already competed in seven World Tour events, including the 3-star event in Port Dickson in Malaysia, where Olympic gold medallists highlighted the competition.

“My most interesting experience on the World Tour was the 3-star event in Port Dickson. It was the first time Malaysia organised such a huge event in beach volleyball with the likes of Kerri Walsh Jennings, Laura Ludwig and Alison Cerutti joining the event. I was super excited the days leading up to this event.

“Based on our FIVB points we were not qualified to participate but as hosts we entered as wild cards. I was grateful that my country hosted this event and I got the chance to meet my idols and watch the world’s best players in action. It was definitely an experience I will cherish forever.

“I was lucky to meet Kerri and Laura! I remember I was stuttering when I spoke to Kerri because I was just awestruck. Kerri was so kind, and she even gave me her shirt, which I always bring in every competition I go to.”

Despite the struggles in her first year, Tasha is seeing progress through these challenges and wants to discover more about the sport.

“The first beach volleyball tournament I participated in was the 1-star event in Vizag in February 2019. It was a really cool experience because my partner and I had to travel to India all by ourselves. Fortunately, my partner had prior experience, so I learned from her how to organise without a coach.

“I quickly realised how different it was to volleyball as we had to go to the preliminary inquiry on our own, arrange our trainings and whatnot. I love the fact that we have to be independent and manage everything on our own. We lost in the qualification round but I made many new friends and it marked the beginning of a wonderful journey.

“My most memorable tournament was the 2019 SEA Games. We had been training hard for the whole year just for that and I think it was the best performance we had ever displayed as a team. I felt so proud to represent my country at such a prestigious event. The atmosphere was just amazing, and it made me think about what I was fighting for. I also got to know many other incredible beach volleyball players from the region and learned from them.

“The last World Tour event I took part in was the Langkawi 1-star before the whole lockdown happened. It was one of my favourite events as it is held in my country. The biggest change for me from my first World Tour event was that I switched from a blocker to a defender when I changed partners. My movement on the court has improved but I still have so much more to learn and discover in this sport.”

Kerri Walsh Jennings is Tasha Mae's hero but she also looks up to a lot of beach volleyball players who inspire the way she plays.

“I have so much respect and admiration towards all of the beach volleyball players because everyone is so special in their own way, but if I had to pick a few, I would say Kerri Walsh Jennings because she’s a legend yet so humble and kind.

“I love Laura Ludwig’s style and flare on the court. I also like Melissa Humana-Paredes because her ball control is just insane. Taliqua Clancy because of how dynamic she is. Sisi Rondina because she’s small but fiery. And of course Anders Mol and Christian Sorum because they’re so young but already dominating the world.”

Off the court, Tasha Mae is like any regular teenager who has spontaneity and does a lot of fun activities on social media.

“I like to draw people. During my free time I like to read, play the guitar and piano. I’ve recently discovered a new hobby – learning new languages. I can speak English, Malay and Chinese, and I’m trying to learn Japanese and Portuguese. I want to become a polyglot one day.