Team of the Week: Claes and Sponcil (Part 2) 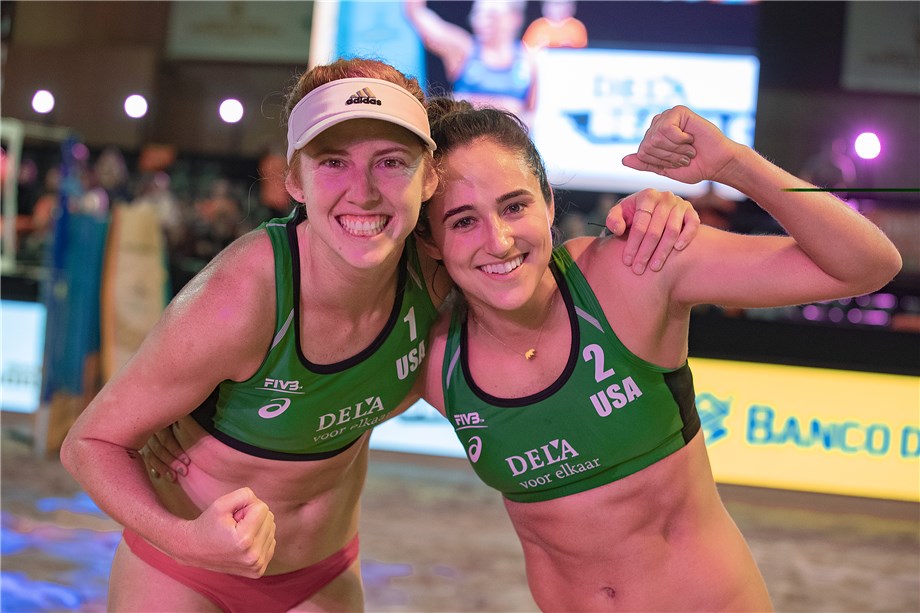 Lausanne, Switzerland, July 2, 2020 - Casey Patterson was one of dozens of athletes on the double-decker bus traveling from the hotel to the competition site in Qinzhou, China, host of a three-star in the early fall of 2018. Like most athletes, he was quiet, lost in that pre-match world to which athletes go prior to competition.

He was also ticked.

Close-by – too close, it seems – were Sarah Sponcil and Kelly Claes, the former still a student at UCLA, the latter in her first full-time year on the FIVB. Their pre-match world is a bit different than most. While many lose themselves in music, podcasts, breathing, Sponcil and Claes laugh (maybe the most contagious fits of laughter you'll hear on tour). Talk at a volume high enough that much of the bus could listen in without much trouble. Write songs. Sing.

"We were laughing our butts off," Sponcil said. "We were just young."

They have remained young, too, in the best of ways. Their ages – Sponcil is 23, Claes 24 – suggest as much, but traveling around the world, hopping from hotel to hotel, time zone to time zone, getting a brief glimpse of home before it’s onto another plane or bus, can age even the most youthful of spirits. It has not done so with Claes and Sponcil.

In fact, all that travel, competition, and ubiquitous pressure of an Olympic race has only seemed to emphasize the importance of having fun with one another.

"I think one of the things I love most is how well we laugh together," Claes said. "I think that’s really important. We have similar senses of humor and we just add on to each other’s jokes and it gets out of hand and we love it."

It took one lunch, and subsequent practice, for Claes to know there was something special there. She had recently split with her partner, Brittany Hochevar, and was exploring her options. As a 6-foot-2 blocker with good hands and an AVP win on the resume, there was no shortage of potential partners.

But it wasn't just a business partner she was looking for.

She sought someone she liked both "on and off the court, and having that chemistry," she said. "I was training with a lot of different athletes, having lunch, talking. I asked Sarah to train a little, have lunch, and I’m very much a feeler. I knew pretty much instantly that 'Dang, this is going to be something special.' And then we trained and I said 'Ok this is going to be really special. I'm all in.'"

A bronze medal at their debut tournament, in Qinzhou, didn’t hurt her case. Neither did a top-10 at the Las Vegas four-star one month later, and a silver medal at The Hague, in 2019, just two months after that – finishes, it must be noted, accrued while Sponcil was still competing for the University of California, Los Angeles.

All that success was impossible to ignore. Sponcil was in, too.

In for what, it was impossible to guess. Sponcil had never done a full-time beach season, and Claes had only been playing professionally for two years herself. They more or less winged it, figuring things out -- and oftentimes not figuring things out -- on the go, racing up the FIVB ranks while establishing themselves as bona fide Olympic contenders.

On the surface, it sounds smooth enough: Two young kids partner up, take on the world with the vigor of youth. In truth, there was, as they are both happy to note, with much laughter, plenty of mishaps along the way.

"There's so many things to laugh about because so many things went wrong," Sponcil said. And that, right there, could be their secret sauce, the ingredient to the chemistry so many teams miss: Their ability to laugh together at all the missed or delayed flights, the matches gone wrong. That they do not simply remain friends throughout some inevitably adverse circumstances, but become closer because of them.

"We've gone to hell and back and been there for each other the whole time which I think is so special and we just [talk] together off the court," Claes said. “Writing songs, the adventures we go on, I wouldn’t want to be doing this with anybody else. I could talk about Sarah all day."

She will, too. Just give her the option and Claes will opine all day about her partner. That's what Claes does, though. She’s a feeler. Her engine is fueled primarily on emotions. Sponcil couldn’t be more different – all logic and reason.

It took a bit for them to figure out that piece of the puzzle, how to communicate with someone on the opposite side of the emotional feedback spectrum. Sponcil once told Claes, in the middle of a match, to just be mentally tougher, "and I'm like 'Oh my God that is not what I want to hear right now!'" Claes recalled, laughing. "And Sarah makes a mistake and I'm like 'It's ok!' and Sarah says 'Just tell me to hit the ball!'"

They've learned to communicate not in the old adage to "treat others how you want to be treated," but to treat the other how that person would want to be treated. Sponcil has softened up on Claes, and Claes is now – she's trying, anyway – more direct with her partner.

"I think it's great that we're complete opposites because we bring so many different things to the table and so many different ideas," Sponcil said. "We're not going to sit here and say we haven't ever had conflict before but I feel like that just means we have so much more trust and we get through it and it makes us stronger in the end. If you're not having conflict that’s a problem because you're just walking egg shells around people and you can't just be yourself and talk about it, get through it, and move on.

"In the beach volleyball world, when things don't go right, everyone just diverts but I don't think they understand why they separated other than they weren't successful in that moment. But you just have to realize that nobody is ever going to win all the time. It doesn't just come naturally. There's a ton of work behind the scenes. You don't grow by just bailing out and finding someone new."

Neither has any plans on finding someone new anytime soon. There's an Olympic race to finish. More medals to win. More songs to write.

More laughter to bring to a couple buses in China.

Related story: Team of the Week: Claes and Sponcil (Part 1)