Team of the Week coach Pitman: My philosophy comes from my Maori culture

Lausanne, Switzerland, May 8, 2020 - Kirk Pitman is the head coach of Australian duo and Team of the Week Taliqua Clancy and Mariafe Artacho del Solar and we talk with him about his coaching philosophy and the team who are currently ranked number five in the world.

Lausanne, Switzerland, May 8, 2020 - Kirk Pitman is the head coach of Australian duo and Team of the Week Taliqua Clancy and Mariafe Artacho del Solar and we talk with him about his coaching philosophy and the team who are currently ranked number five in the world.

Also read:
- Taliqua Clancy's 2019 story
- Mariafe Artacho del Solar on battling through injury, success and what comes next
Pitman played 124 FIVB events in an 11 year career that finished in Klagenfurt in 2012. Klagenfurt is one of the most vibrant stops that the FIVB Beach Volleyball World Tour has ever seen and it was the stage of Pitman's finest memory, when he and his long term partner Jason Lochhead (for 118 of 124 events) had their best finish of a 4th in 2008, losing in a closely fought bronze medal match against two absolute legends of the game in Ricardo Santos and Emanuel Rego.
The Austrian lakeside city was always a memorable stop on the FIVB World Tour and although Pitman and Lochhead just missed out on a medal, they did win the hearts of the fans with their performances on court and their rendition of the haka, an ancient war dance from their Maori culture that is used to intimidate opponents, something that the Kiwi pairing had promised to perform if they ever made it to a final four.
Pitman, who has been coaching since he retired now suggests that instead of intimidating opponents his Maori roots now help him paint the picture of his coaching philosophy, a philosophy that is built around his athletes.
“I have an athlete centred approach. My philosophy comes from my Maori culture, I try to create warriors that will go out there and go to war.”
Kirk, a fiery competitor who played his career as a blocker and is remembered by many for his incredible transition setting skills, admits that although his coaching philosophy is now becoming more refined, he didn’t see himself coaching after a successful playing career. But it now seems as if his mindset has shifted and he is enjoying the challenge that the coaching profession has presented to him. There are even a few similarities between the two and a few nerves too.
“After retiring in 2013, I didn’t see myself getting into coaching. But as I am so competitive it does give me the closest feeling to actually being out on the court, even if it is more nerve-racking! I enjoyed the journey as a player, so now it feels as though I have started a new journey as a coach, learning lots along the way and then producing performances.”
Pitman is aware that his openness to learning has helped his team produce world class performances, but states that his biggest lesson when transitioning from a player to coach was when he understood that there is a bigger picture than just his own performances, he declares.
“It isn’t all about me anymore! Now it’s all about doing what’s best for the team and putting their needs ahead of mine. It is also about the emotional control needed to maintain a stable leadership no matter what the situation and how your athletes are feeling.”
Kirk credits a lot of his development as a person to his first partner and eventual coach Craig Seuseu and to his mentor Mike Dudson, who has helped him through his journey as a player and now as a coach and has in his words constantly shown him ‘what it takes’. He also credits  Lochhead because they learnt so much together and Jason ‘put up with me for 10 years!’ 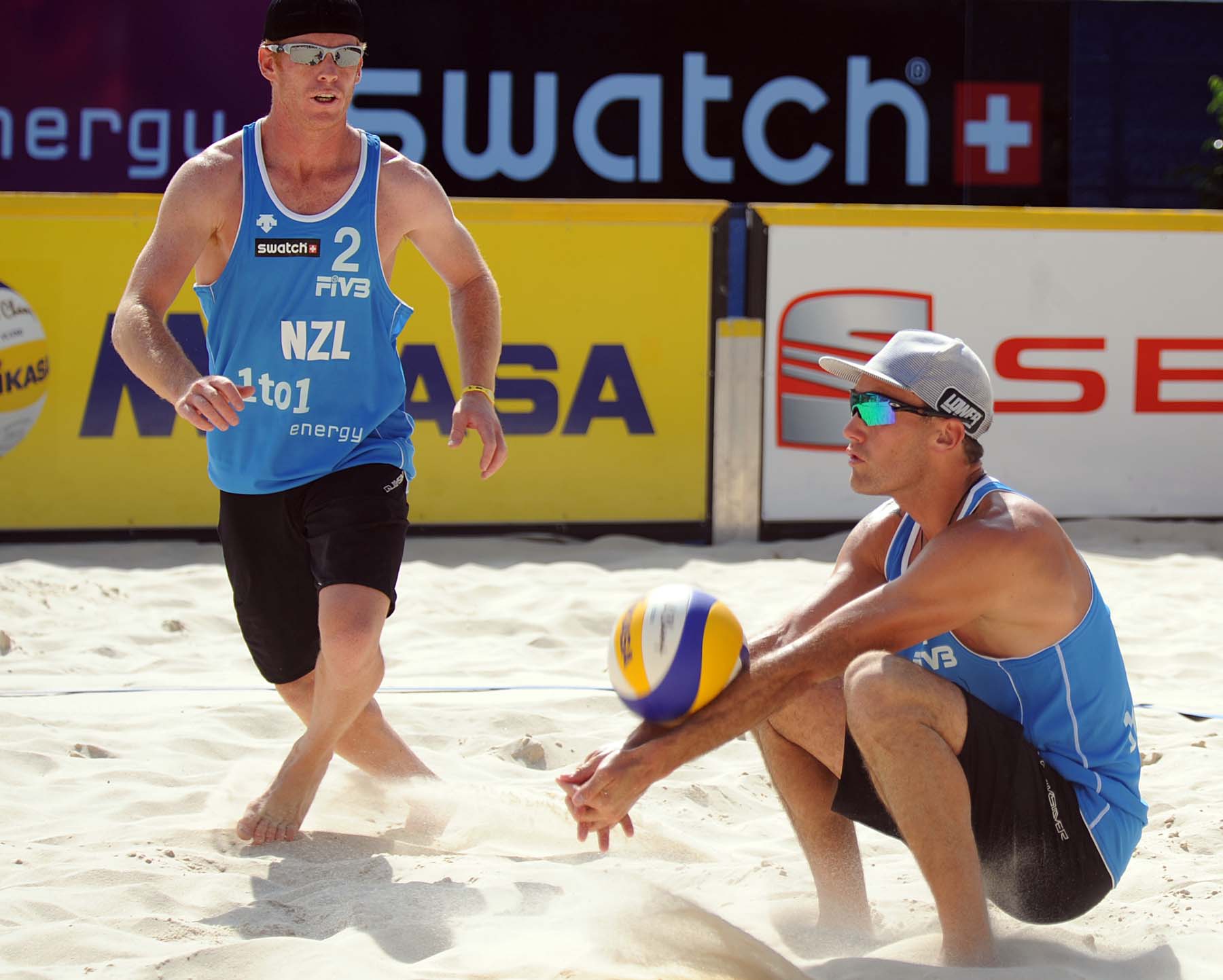 Kirk Pitman and Jason Lochhead in action in Gstaad in 2010

When asked what Kirk the coach would advise Kirk the player, Pitman answers: “I would tell myself to say less!! Also to just focus on the things I can control.”
Kirk finished his playing career and moved to England where he married 2012 Olympian, Zara Dampney and they have since had two children, Florence, 3, and Otto,1. Kirk had been coaching England’s Chris Gregory and Jake Sheaf prior to his appointment with ‘The Volleyroos’. The turnaround was quick with Kirk finishing his role with the English outfit at the Commonwealth Games in 2018 and then starting his new role with Clancy and Artacho del Solar the very next week.
“After living five years in England and starting a family, it has been a great experience so far and we are loving the lifestyle here in Australia.  It’s quite similar to New Zealand and there is a good volleyball community.”
Like many coaches on the Tour, Kirk can spend up to six months a year away from home and away from his loved ones, and for him, like so many other parents on the World Tour, this is the toughest part.
“The travel is the hardest thing. I have travelled around the world since I was 19, but now it is tough being away from the family.”
Since Pitman started coaching Clancy and Artacho in 2018, they have become one of the most consistent teams on Tour. They were one of the few teams to win twice or more on the World Tour in 2019, with wins in Warsaw and Chetumal, and they also finished third at the FIVB Beach Volleyball World Championships in Hamburg, an impressive feat considering that Artacho del Solar injured herself in the first elimination round. The injury kept the team from competing for almost four months after the competition.
Both Clancy and Mariafe have both said in their articles with us that their team values seem to just ‘align’ and that their team has a ‘resilience’ to it. Clancy also suggested that their great 2019 season started in the preparation stage. Pitman tells a similar story.
“We had a good pre-season so I knew we had something special. The girls were committed to achieving their goals and we worked really hard.  So that is always a good sign. Our goal is always to walk away with some medal in any event we go to. The thing that has impressed me the most with the girls is their resilience and coping with adversity. The World Championships was an amazing outcome, that we targeted, especially considering Mariafe’s injury, and then it was tough to make the decision not to play the rest of the season as we had some big events after the World Championships - but it was for the best”.
Coach Pitman describes Clancy as ‘one of the most competitive and loyal people I know’ and Artacho as someone who has ‘so much resilience and fight in her and someone who is so caring’. He says that the secret to their consistency is being able to hit the reset button, a special quality in high performance sport.
“Emotionally resetting between each event is important for us, knowing we have downtime and social recovery so we are ready to go at it again when we need to. We worked hard mentally and physically in the pre-season to prepare us for the demanding season.”
The Australian pair have certainly benefitted from having Kirk at the helm in their team and are tipped by lots of insiders to go very close to the podium in Tokyo.
The Games being moved is a positive for Pitman. “It has given us another year to physically get stronger and keep refining.”
The team certainly have formed a close bond over the past two years and we are sure to be seeing them back in final fours of World Tour beach volleyball very soon.
But for Pitman, the 38-year-old Kiwi from Tarunga, if you would have told him 10 years ago that he would be leading Australia towards an Olympic Games and potentially an Olympic medal, he would have said: “You have got to be kidding me!”
This concludes our series with the Australian team of Taliqua Clancy, Mariafe Artacho and their coach Kirk Pitman. We would like to thank them for their time and we wish them good luck in the future.