Lausanne, Switzerland, October 13, 2020 - There is no feeling sorry for Jake Gibb. The 44-year-old has enjoyed one of the most brilliant beach volleyball careers of any American. One that has resulted in numerous victories, an entire world travelled, and, truth be told, one which neither he nor his wife, Jane, ever really expected him to have.

Lausanne, Switzerland, October 13, 2020 - There is no feeling sorry for Jake Gibb. The 44-year-old has enjoyed one of the most brilliant beach volleyball careers of any American. One that has resulted in numerous victories, an entire world travelled, and, truth be told, one which neither he nor his wife, Jane, ever really expected him to have.

They’d agreed on a two-year deal, he and Jane, when the young newlyweds moved from Utah to Southern California 2002. Gibb would pursue beach volleyball full-time. Jane would work multiple jobs while her husband went to the beach.

“If I can make a living after two years, let’s stick with it. If not, let’s go into the business world and I’ll be a normal career man,” Gibb said in a previous interview. “I had an unrealistic view of what the AVP [Tour] was. I just kinda thought if you were a minor draw player, you’d be earning a living. If I knew the reality of it I don’t think I would have moved out. There was no way I would have thought I’d be a three-time Olympian and whatever.”

That two-year deal has since become a nearly two-decade one, a delightfully unexpected epoch that has included 43 wins, three Olympic Games, and status as one of the most dominant blockers the United States has ever had.

So no, he does not expect, or want, anyone to feel sorry for him, or the fact that his retirement was postponed this year. He was hanging it up after the Tokyo Olympics. He knew it. His partner, Taylor Crabb, knew it. His coach, Rich Lambourne, knew it.

Most importantly, his family, which includes his wife and two kids, Cora and Crosby, knew it. 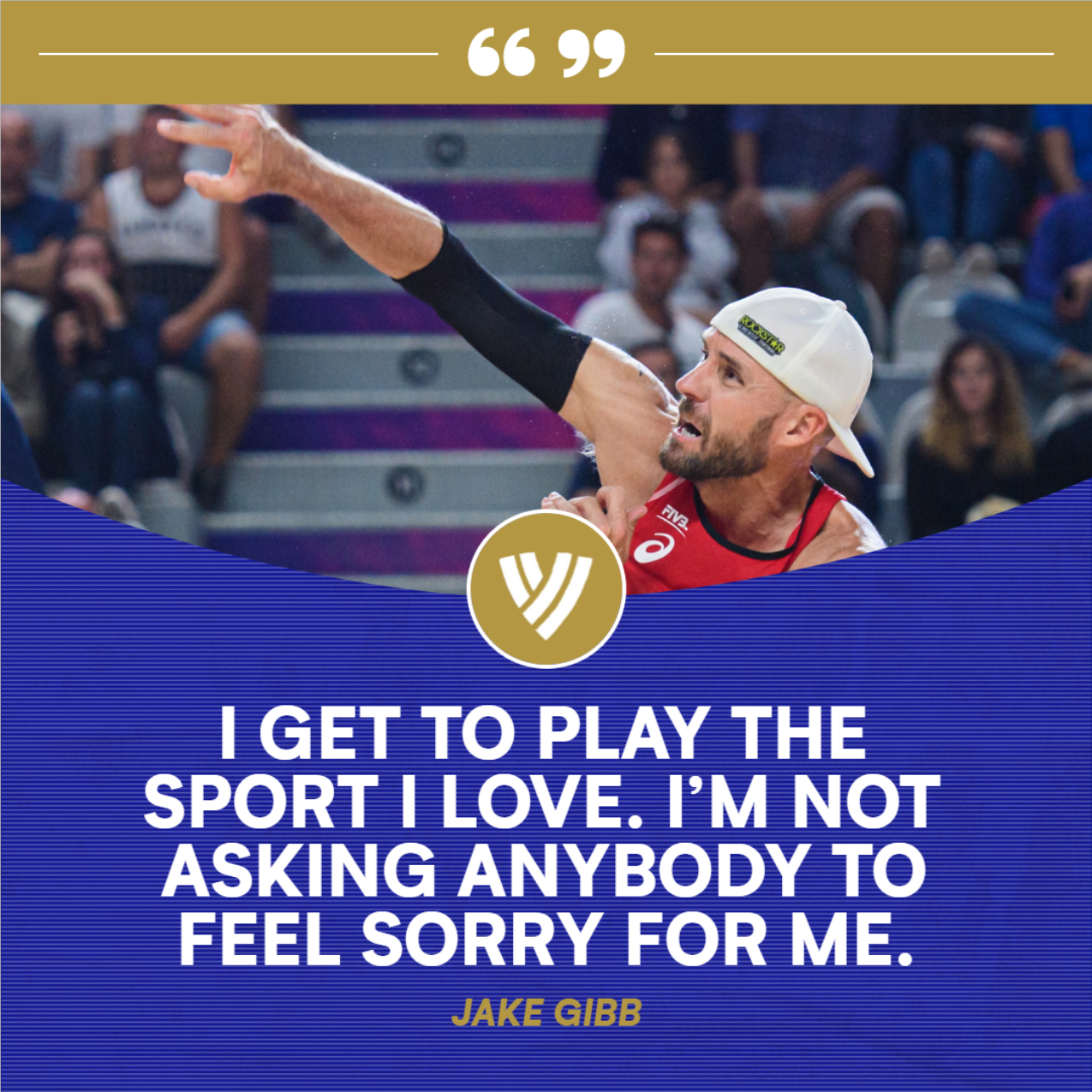 “It definitely rattled me,” he said. “I was looking forward to being done. I was looking forward to spending summers with my family and it feels like the right time. To reset and take on another year was hard, but at the same time, I get to play the sport I love. I’m not asking anybody to feel sorry for me.”
So he and Crabb are pressing onwards. In two very different styles, of course. Crabb is just 28, Gibb 44. While Gibb has spent the majority of this year – aside from the four weeks of the AVP Champions Cup -- working with his strength coach, determining how best to keep his body fresh for the 2021 season he didn’t anticipate playing, Crabb is competing in virtually every tournament he can find.

Crabb recently won a King of the Beach, put on by his good friends and fellow players Riley and Maddison McKibbin, in Hermosa Beach. A few days later, he hopped on a flight to Greenville, South Carolina, to compete in a grass tournament.

Read more: Everyone plays everyone at King of the Beach

While Gibb is working on eccentric squats in the weight room, Crabb is competing again, this time with rival and good friend, Nick Lucena, in a tournament in Myrtle Beach, South Carolina.

“Taylor is going from 27 to 28 years old. I’m going from 44 to 45, that’s significant,” Gibb said, laughing. “It’s hard for me to deny that. But it’s just more work for me to keep myself as in shape as possible. It’s just a bigger challenge.”

In 20 years, the challenges have never once bested Gibb. Testicular cancer? Beat it. Melanoma? Beat that, too. Best teams in the world? Beat all of them, too.

What’s another year playing the sport he loves, with the team that’s become basically family?

“I love seeing different cultures, I love everything from enjoying different coffees to different cuisines,” he said. “I have my favuorite restaurants I go to. I love that part of it. We go to the coolest places in the world.”

One last time, then, he’s hoping to go to Tokyo. One final Olympic Games. Currently, he and Crabb are in the driver’s seat for the U.S., ranked eighth in the world and No. 1 among the Americans. The last international tournament they played, the Chetumal 4-star in November, was also their first medal, and win, as a team, as they defeated the Netherlands’ Alex Brouwer and Robert Meeuwsen.
So yeah, one more year of medals, of travelling the world, of sipping coffee and representing his country, isn’t the worst of alternatives to retirement. At this point, it’s just a waiting game until the schedule is released. More lifting. More reps. More of maintaining his body in peak physical condition.
“I need to keep testing my body,” Gibb said. “What we’re doing is, we’re doing little training blocks, and we’re treating it like it’s preseason training. We’re picking things we want to work on and training those things, but we’re doing it in two and four and five week period of times, then we take a few weeks off then we do the same thing again.”

One last blessed season in the indelible career of Jake Spiker Gibb.