Team of the Week: Rossi and Carambula 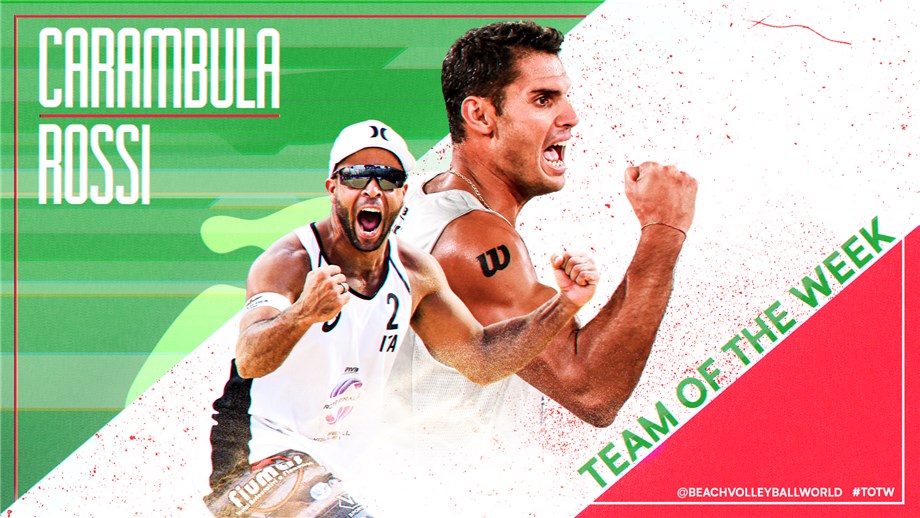 Lausanne, Switzerland, September 15, 2020 – Few beach volleyball players are automatically associated with a unique play, but when the name Adrian Carambula is mentioned it immediately brings to mind one of his favourites serves – the sky ball.
The Italian, who has played alongside Enrico Rossi since the start of 2019, has honed the serve to devastating effect on the FIVB Beach Volleyball World Tour.
Standing parallel to the service line, the left-handed Carambula fires the ball spinning high into the sky towards his opponents’ side, while using the conditions on the court to maximum effect.
At best it causes issues galore and often results in an ace, but even if the opposition are ready for it Carambula has bought plenty of time for him and Rossi to ready themselves in defence.
“The most important thing with the serve is to not tense up, to keep your body loose, keep your hands loose and just hit it up,” Carambula told fivb.com in 2016.
“I think it is part of my game because it is different, and people don’t train against it. It is a movement that comes naturally to me. I feel the wind and then I let the ball and my arm do what comes naturally.
“It is not something I learned, it is something that came to me naturally.”
The 32-year-old Carambula and 27-year-old Rossi have continued to enjoy using the sky ball since they teamed up for the first time at the 2019 Sydney 3-star, where they won silver.
They have not managed to add to their medal tally since then, but they did impress at the Hamburg 2019 FIVB Beach Volleyball World Championships where they reached the quarterfinals.
Their most recent World Tour tournament was the Chetumal 3-star in November 2019, but since the lifting of the Covid-19 restrictions they won silver at the Italian Championships in August.
“A weekend like this in Caorle after a long stop made me remember how much I love this sport,” Carambula wrote on his Instagram feed after their defeat to Olympic silver medallists Daniele Lupo and Paolo Nicolai.
Both players grew up on the beach. Rossi hails from Cesenatico on Italy’s east coast, while Carambula grew up on South Beach in Florida having moved to the USA from his home country of Uruguay.
He moved there aged 14 and after making his name on the AVP Tour in the States, a word from Phil Dalhausser to then Italian coach Paulao Moreira alerted him to the fact that Carambula qualified for Italy through his grandmother and might be worth a look.
From 2015 to the end of 2017 he played alongside Alex Ranghieri and the pair qualified for the Rio de Janeiro 2016 Olympic Games, where they were knocked out by Lupo and Nicolai in the knockout rounds.
Currently Carambula and Rossi are just outside the Olympic qualifying places in 18th in the provisional FIVB Olympic Rankings, but with a few sky ball-inspired victories, there is no reason why the pair will not be packing their bags for Tokyo 2020.
“It is what I work for every day with Adrian,” Rossi said in an interview with Italian website Volley News. “With a bit more consistency I am confident that we can qualify.”
Quick links:
FIVB Beach Volleyball World Tour
Olympic Games Tokyo 2020
Facebook
Twitter
Instagram
Youtube