Team of the Week: Tri Bourne and Trevor Crabb 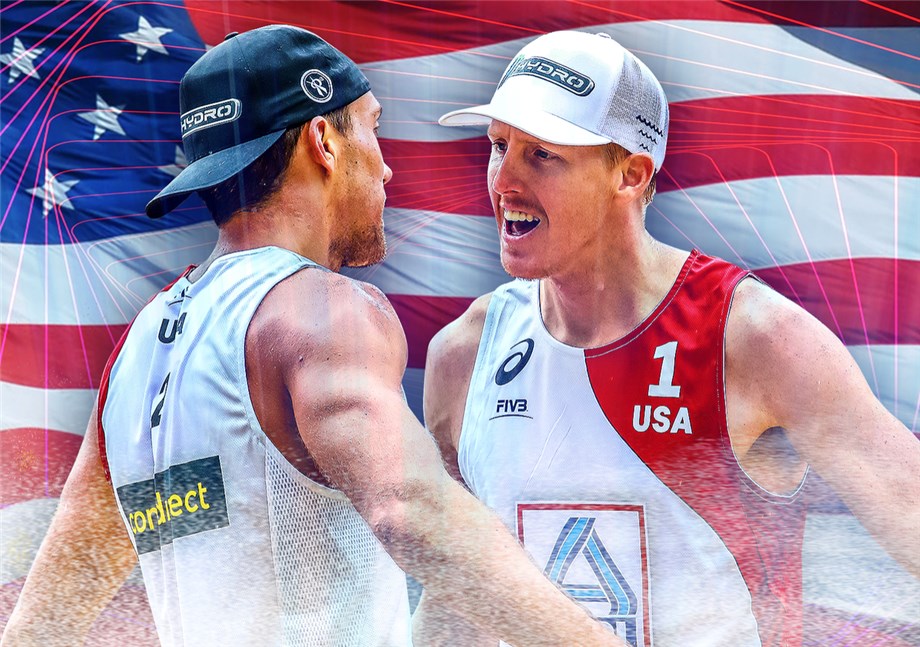 Lausanne, Switzerland, May 24, 2020 - Naia Bourne crawled up the stairs the other day. Three of them, anyway. This may not sound the least bit spectacular to you, but for at least two people in the world, it was a momentous occasion for the young daughter of a beach volleyball player and an actress. As is the fact that she is now able to stand on two legs, propping herself up with whatever she can find. And that there’s a tooth – tiny, small enough that you’d have to feel around her gums to find it – poking out of her infantile mouth.
All of these firsts are scrapbook memories for any parent. Yet for Tri Bourne, Naia’s father, these moments are perhaps more precious than the typical dad could realize. He wasn’t supposed to be there for many, if any, of them.

A member of the second-ranked United States beach volleyball team in the 2021 Olympic race, Bourne wasn’t even scheduled to be in the same country as his daughter and wife, Gabby, let alone the same room, at this time of year. He’d have been off to every four- and five-star on the FIVB schedule. He’d have been witnessing these moments after they’d already happened, via FaceTime or Zoom, not seeing them first-hand.
Instead, he’s at home, playing the role of full-time dad, watching as Naia grows quite literally before his eyes.
“It’s such valuable time in the big picture of life and the stuff I’m going to look back on versus just another season on the tour,” said Bourne, who finished the 2019 season with a bronze medal at the Chetumal four-star with Trevor Crabb. “This is a huge life moment to be here for that. I don’t have to sacrifice losing out on playing on the World Tour to do it. I’m pretty lucky for that.”
He and Crabb can consider themselves lucky, or at the very least fortunate, for a number of reasons. There is not a single professional beach volleyball player on the planet who would prefer the life of quarantine to that of their livelihoods: traveling around the world, competing in the sport they love for a living. But if there was a year for this to happen, and a team for this to happen to, theirs is the top choice.
Good friends since childhood, where they were raised in Honolulu, brought up on the courts at Outrigger Canoe Club, Bourne and Crabb are one of the most unlikely pairs in this Olympic race. Prior to their partnership, formed somewhat spontaneously in 2018 upon Bourne’s return from an autoimmune disease that kept him out of volleyball for nearly two years, neither had ever played defense at the highest level. Neither had played right side. But Crabb’s partnership with John Mayer wasn’t going as he’d hoped, and Bourne just needed someone to play with.
“I just wanted to reintroduce myself to the sport and just have fun with it, kind of try and fall back in love with the sport as a player,” Bourne said. “For me, I just got a good vibe playing with Trevor, like this is going to be fun.”
To their own self-admitted surprise and delight, it worked. It worked spectacularly well. In just their third event, at AVP Hawai’i, they finished third, logging a win over Phil Dalhausser and Nick Lucena in the process. They won gold in their first FIVB, a three-star in Haiyang, China in September of 2019, then followed it with a fourth at the Las Vegas four-star two weeks later.
On paper, little of this made sense. Here were two undersized, left-side blockers, split-blocking for the first time since they were kids at Outrigger – and it was working?
That’s the thing about sports, though. They don’t have to make sense on paper.
It just has to make sense on the sand.
“We had to figure out who we were going to make a run at the Olympics with, but when you go out and you win a gold medal in your first event on the World Tour and first event of Olympic qualification, it makes you think twice,” Bourne said. “Then we had the Russians on the ropes in Vegas for bronze, I thought: ‘Well, if I can play with one of my best friends and dominate, I’m going to take that all day.’”
Which brings us to where we are now: No set timeline to return to FIVB competition, but ample time to improve.
Bourne and Crabb both admitted that they really only began to figure out the defensive side of the game towards the end of the 2019 season. This led to some hilarious moments, like a double-block against Norway’s Anders Mol and Christian Sorum – they have since dubbed this the Hawai’ian Curtain – and also some moments both would like back: balls they could have dug, transitions that could have been smoother, points they didn’t capitalize on.
“We were running purely off confidence: ‘I don’t know how to do this but I’m going to figure it out because I’m a good volleyball player,’” Bourne said. “We refused to buy into the idea that we haven’t done this so we’re not going to be good at it. Eventually, if you believe it long enough, it comes true, and that’s Trevor Crabb in a nutshell.”

Now they have at least another year to finetune their game with coach Jose Loiola, digging into the nuances and subtleties of split-blocking before making a final Olympic push when play begins again.
“Compared to Taylor [Crabb] and Jake [Gibb], they’ve played a full quad together and I’ve never personally played with the same partner – this is the longest it’s been with one partner so it’s nice to have a few years under the belt,” Trevor Crabb said. “This next year will give us the extra reps we need.”
It will provide the time they need as a team, on the court, and the bonus time Bourne never expected to have with his daughter, witnessing the moments he otherwise wouldn’t have been able to.
As Naia grows into her own role in the house – crawling, teething, climbing stairs – so, too, is dad, growing into his own role on the beach.