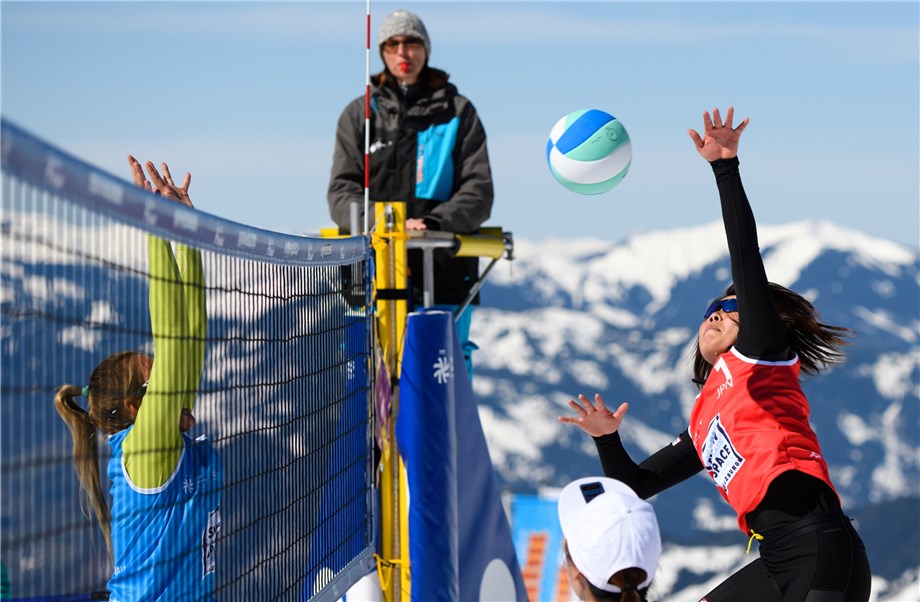 Bariloche, Argentina, July 4, 2019 – With less than a month to go to the third of three events on the inaugural 2019 FIVB Snow Volleyball World Tour, teams from all five continents have signed up to play in Bariloche, Rio Negro, Argentina from August 2-4, representing 14 different countries.
The World Tour event in Argentina will be the first to take place outside Europe and is organised in a close collaboration between the FIVB, the Argentine Volleyball Federation (FeVA), Hub Travel (Promoter) and the local authorities of Bariloche and Rio Negro.
The men’s entry list is headlined by the USA team which struck gold at the previous World Tour stop at Plan de Corones/Kronplatz in Italy. To their roster, including high-flying Troy Field and the fascinating Riley and Maddison McKibbin brothers, the name of the third McKibbin brother, Jameson, has been added for the Argentine event in Bariloche, Rio Negro.
Europe will be represented by teams from Russia, Italy and Sweden, who will make the country’s rookie appearance on the men’s World Tour. China will represent Asia in the men’s tournament for the first time. Teams from South American countries Brazil, Chile and Uruguay will also be featured, alongside hosts Argentina, while teams from Cameroon and Nigeria will represent the African continent.
Argentina are no rookies on the women’s side, as their squad not only played in both Austria and Italy, but also earned bronze at each of the two events. Julieta Puntin, Cecilia Peralta, Maria Eugenia Tuliz and Maria Virginia Zonta are now expected to do even better on home snow as one of the two women’s teams from the host nation.

One of the big names from the world of beach volleyball, 2012 Olympic bronze medallist Juliana Felisberta da Silva, highlights Brazil’s roster for the country’s debut in snow volleyball. She will play alongside three thriving beach volleyballers – this year’s U21 world champion and 2016 U19 world champion Victoria Lopes Pereira Tosta, 2013 U19 world champion Taina Silva Bigi and two-time gold medallist on the 2018 FIVB World Tour Josemari Alves.
Sides from four European countries are currently registered to compete in Bariloche, while North America will be represented by USA and the same four players who have earned two silver medals on the Tour so far and gold at the first-ever three-a-side tournament, the European Tour event in Moscow – Karissa Cook, Emily Hartong, Katherine Spieler and Alexandra Wheeler.
Kronplatz semifinalists Japan, led by experienced Shinako Tanaka, are the Asian women’s team who will play in Bariloche.
Additional teams may be added to the entry list until July 22 to complete the roster of 16 teams per gender in the main draw.

The event will be broadcast by NBC, The Olympic Channel and by the FIVB Facebook and YouTube channels. All matches on the centre court will be streamed from day one of the main draw.
Click here for the men's entry list.
Click here for the women's entry list.
Related article:
Bariloche - Rio Negro looks ahead to Snow Volleyball World Tour stop in August
Quick links - Snow volleyball:
FIVB Snow Volleyball World Tour - Bariloche, Rio Negro
FIVB.com - Snow volleyball
Rules of the Game 2018-2020
News
About