Kaliningrad, Russia, April 28, 2020 – One of Russia's big volleyball stars, Tatyana Kosheleva, has reminisced about her life-long memories of the 2010 FIVB Volleyball Women's World Championship in Japan, where she and her teammates won the title.

Kaliningrad, Russia, April 28, 2020 – One of Russia's big volleyball stars, Tatyana Kosheleva, has reminisced about her life-long memories of the 2010 FIVB Volleyball Women's World Championship in Japan, where she and her teammates won the title.
“Ten years?! I can’t even believe that so much time has passed! Such events are not forgotten and stay in one’s memory for a lifetime,” the 31-year-old striker told RIA Novosti.

“Our team was special: powerful, united and very hardworking. We listened to coach Vladimir Kuzyutkin, we had faith in him, and most importantly, we had faith in each other. The main qualities of that team were discipline and respect for our daily work.” 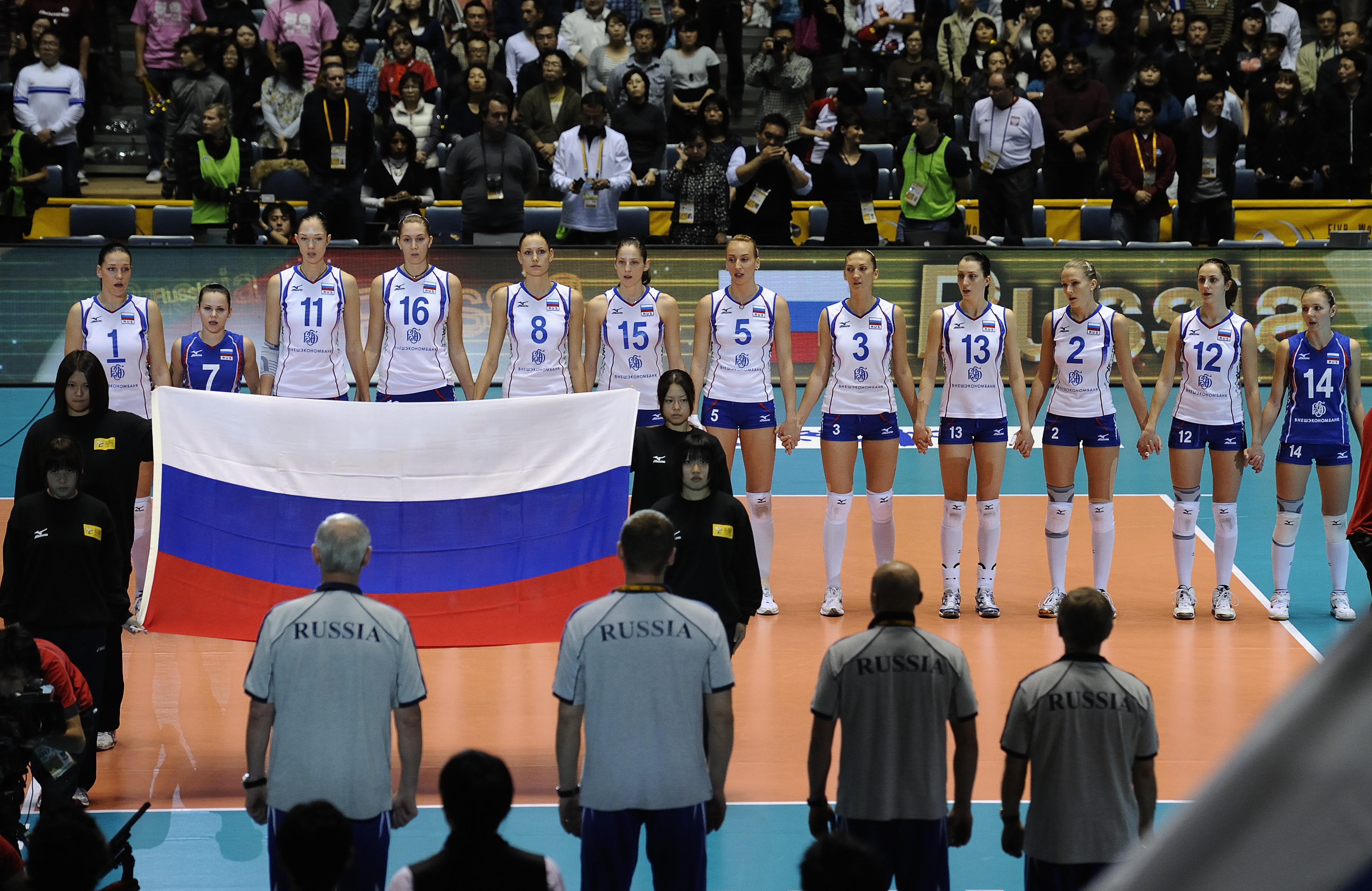 Kosheleva (#15) and her teammates singing the national anthem before the 2010 World Championship final
In the dramatic final in Tokyo on November 14, 2010, Russia came back from a set down twice in the match to triumph with a 3-2 victory over Brazil.
“Coach Kuzyutkin looked absolutely calm. He never raised his voice. I am sure he was burning inside, but he transmitted only confidence to us,” Kosheleva recalled. “During our preparation for the tournament he kept telling us what a super team we were, how we were the best and most talented, and how strong our strikers were. But the main thing was to follow the system. I remember being so confident that even in the most critical moments I knew we would be victorious. My deep conviction is that the work of a coach is not only in high-quality constructive training, but also off the court.”
On a 53.88% success rate in offence, the young Russian outside topped the World Championship chart for best attackers and received the Best Spiker of the tournament award, a very emotional moment for Tatyana, who was only 21 at the time.
“Everything was first-time for me - the emotions, the rivals, the atmosphere and the love of fans from all over the world!” Kosheleva said. “Only years later, I realized what a huge sporting feat our team had accomplished. At the time I was so self-critical that even after the final I thought about my mistakes and did not enjoy the victory. How strange! I was the best spiker of the whole championship and I still can’t answer why I was not completely satisfied with my performance. But in general, winning a gold medal and an individual prize is an amazing emotion.” 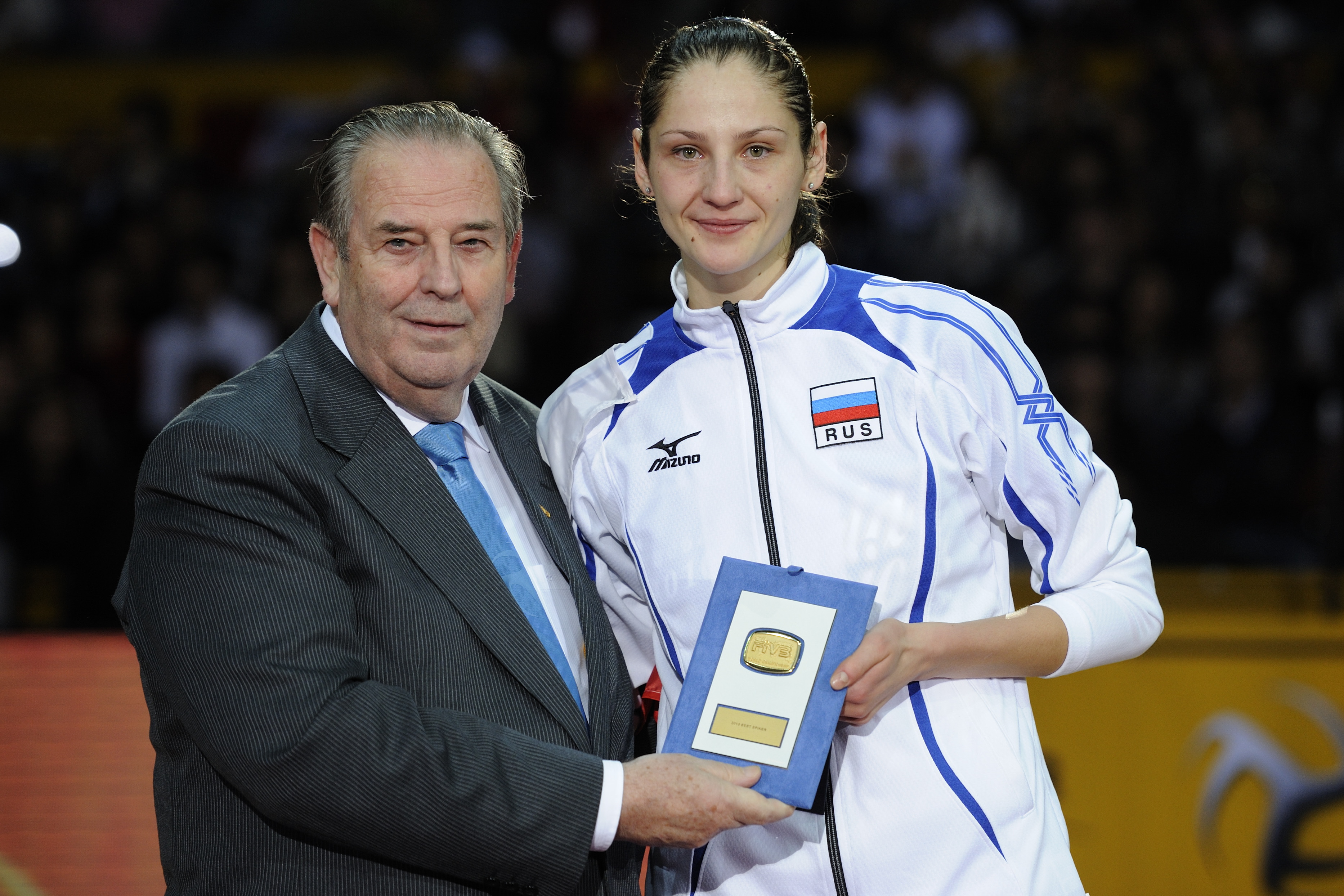 Tatyana Kosheleva receives the award for Best Spiker of the 2010 World Championship
While the World Championship gold was the highlight of Kosheleva’s national team career, during which she played a total of 151 games (including 11 at the 2012 and the 2016 Olympics) and scored 2,148 points, the 1.91m-tall athlete also claimed two European Championship titles (MVP on both occasions), two FIVB World Grand Prix medals and a number of individual honours.
“I have had such an eventful and challenging sports career that each of my medals and individual awards represents a great test and a lot of hard work. So I value all of them equally,” she said. 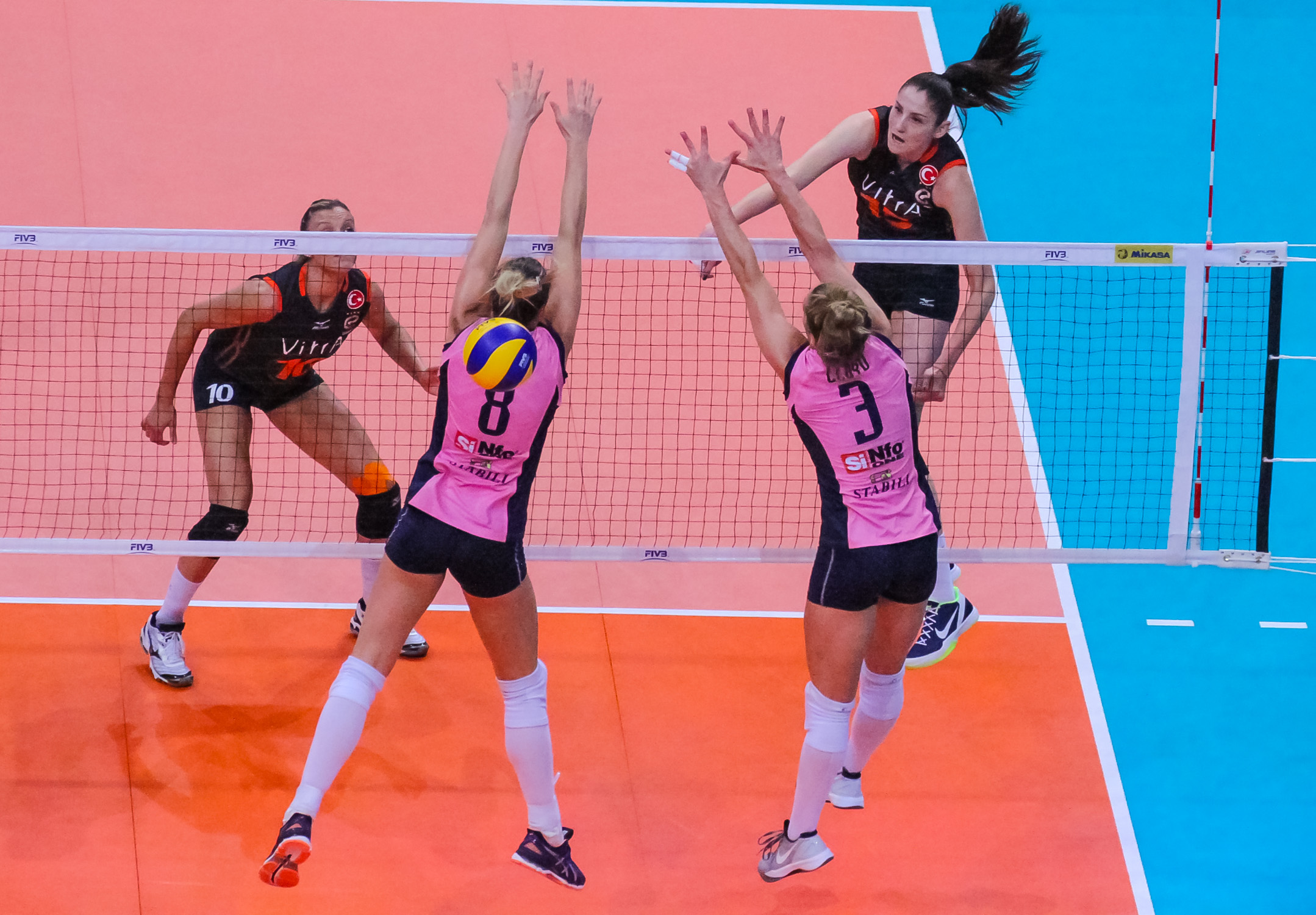 Kosheleva was the top scorer with 23 points in the 2016 FIVB Volleyball Club World Championship final
Kosheleva’s successful club career includes one gold and one silver medal from the FIVB Volleyball Women's Club World Championships, with Dream Team nominations on both occasions. After winning the CEV Cup twice and silver at the 2015 Club Worlds with Dinamo Krasnodar, she opted to continue abroad, unlike most of her fellow Russian players, who generally prefered to compete for Russian teams. With her very first foreign club, Eczacibasi VitrA Istanbul, she reached the top of the world at Manila 2016. Since then she has played for clubs from Turkey, Brazil, Italy and China before returning to Russia and joining Lokomotiv Kaliningrad in early 2020.
“I had an incredible experience playing for the best teams in the world - life experience, new friends and contacts, different cultures... You can’t find all this sitting in one place. I feel that I have grown as a person and as a professional. Now I can speak English fluently and I know some Portuguese. I could hardly have achieved all this if I had stayed to play at home. In this sense, I am proud of myself and I try to set an example for others. Movement is life. Do not be afraid to leave your comfort zone!” Kosheleva commented.
After the end of the club season in Russia, Lokomotiv announced that the two-time Olympian would be leaving the club.
“My plans are changing because of the pandemic and I am not sure if I will be able to accomplish them. I don’t know how long this will last,” she said. “I am considering proposals and I will choose a country, where the team and the goals match my ambitions.”
Kosheleva is also planning to further develop her own YouTube channel, which she started a few months ago.
“I’ve taken the challenge to show the inner life of our profession. I have a lot of new ideas that I would like to implement and bring the channel to a higher level in both quality and content. I am preparing surprises. I always read the comments. For me people’s reaction is important. After all, this is all for my supporters and the volleyball fans.”
Tatyana Kosheleva pointed out that she has always admired Lyubov Sokolova among her compatriots, as well as Croatia’s Natasa Osmokrovic and Brazil’s Walewska Oliveira. When asked to pick a dream team of athletes she has played with, she went for setter Maja Ognjenovic, opposite Tijana Boskovic, outside spikers Fernanda Garay and Lyubov Sokolova, middle blockers Thaisa and Foluke Akinradewo and libero Anna Malova.
“I myself would love to play on such a team!” she added. “I was lucky that in my career I touched with several generations of outstanding players.”
More volleyball from Russia:
Karpol dynasty - 51 seasons at Uralochka and counting (Part 3)
Sokolov and Dijkema moves highlight transfer market in Russia
Karpol dynasty - 51 seasons at Uralochka and counting (Part 2)
Key Russian internationals stay put
Karpol dynasty - 51 seasons at Uralochka and counting (Part 1)
Koroleva, Startseva sign with Russian champs for two more years
Loko Novosibirsk earn historic title; golden double for Dinamo Kazan
From Moscow to Punta Cana: De la Cruz enjoys unique flight
17-year-old Murashko named MVP of U23 Russian League
Dinamo Kazan extend contract with Croatia's Fabris for two seasons
Ukraine’s Iereshchenko stuns Fakel from serving line
Russian stars Kobzar, Poletaev steer Kuzbass to unexpected turnaround in Champions League
Loko Novosibirsk first-time regular season winners in Russia
Parubets shines in Russian quarterfinals
Maciej Muzaj’s top five scoring performances in Russia
Dinamo Kazan top regular season in Russia, all set for playoffs
End of an era? Zenit’s earliest ever Champions League exit
Kseniia Parubets shines as Champions League top scorer
Olympic champ returns to Russian Superliga
Russian national team opposites engage in scoring race
Poletaev back in action after injury
Goncharova proves priceless for Dinamo
Quick links:
FIVB.com - Volleyball
Facebook
Twitter
Instagram
Youtube